In Love with Barcelona

Remember when you were in elementary school and the measure of a good book was the number of pictures per word?  Well, this one goes out to your inner second-grader!

Barcelona rocks.  OK, I sound like a teen when I say that, but it is true.  Two days ago, my blog was entitled “Falling for Barcelona”.   We have fallen.

Barcelona has beaches in the middle of the city.  20+ years ago, this was all industrial shipping area.  Quite an urban renewal. Here are Wiley and Terrill a few minutes before sunset: 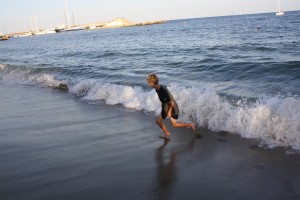 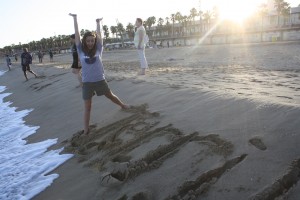 We loved bonding at the Miro Museum. I caught Liam in as he was truly amused and I survived an attack from Virginia. 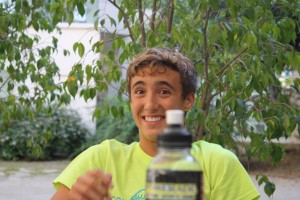 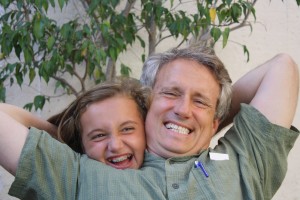 Proof that Joan Miro knew Susie?  You be the judge. 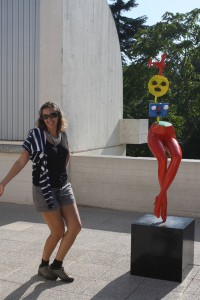 We all posed at the Parc Guell in front of some odd Gaudi buildings.  The left building looks like a gingerbread house.  The spire on the right is beautiful.  I will have more on Gaudi in a separate blog. 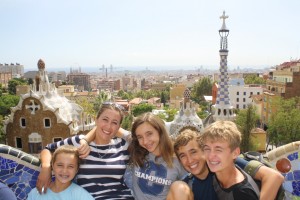 This shot looks so relaxed and personal, but there are about 20 people waiting to get a shot on this bench. 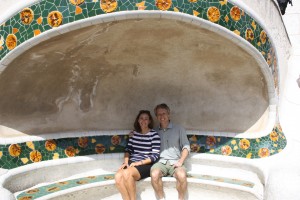 We visited a fort/castle that had a bit of a mixed history.  It was built by Madrid in the 18th Century to keep an eye on the Catalans of Barcelona.  Later, Franco used it for executions.  During our visit, however, we saw no conflict.  Of course, we did our part to maintain the peace.  During the time Terrill and Wiley manned this gun, no one successfully invaded the fort! 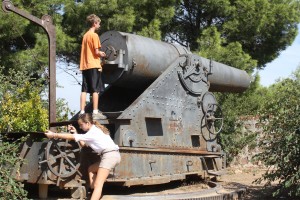 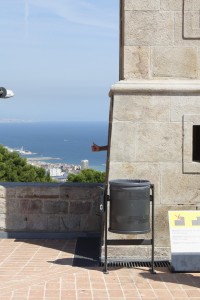 In fact, things are better than OK.  If you look closely in this picture, you will see Liam and Virginia within 12 inches of each other and not fighting!  She looks happy, He looks confused at the momentary peace. 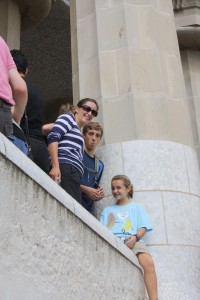 During our Great Works of Literature lecture, we learned about Cervantes’ “Don Quixote”. Virginia was excited to see him at La Rambla (the main drag of Barcelona).

I must say that it nice to know that the crew is getting full days in.  I also love the fact that I still have more staying power than the kiddos.  Here is Terrill on a walk home. 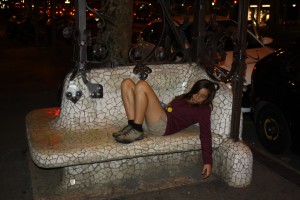 PS  I want to include one final picture.  I love this one because it shows Susie’s beauty and her sense of humor.  When she was here as a 18 year-old, she was dramatic like all teens.  When she and her friend visited the Fort (the one Wiley and Terrill were protecting), she posed for a powerful pic.  She put her hair up (a la Grace Kelly) and stood looking out to sea.  Her friend took her picture as she gazed out - longingly - at the world that will never fully understand her.

Well, Susie is now a mature woman that has no need for drama or ennui, but she does appreciate coming back to a place she enjoyed before.  After sharing the embarrassing Grace Kelly story, we cajoled her to do a encore performance.  Instead of a silk scarf, she used her knit sweater.

But she still looks dramatic! 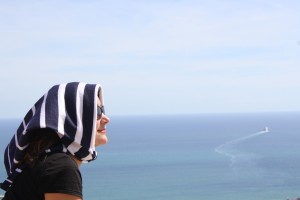 I am just glad that we are not visiting the Cliffs of Moher in Ireland.  That is where I took my dramatic 19 year-old pics (I, however, was shooting more for Bono of U2 than Grace Kelly).