Getting Deep in Budapest

I would like to do two things in this blog.

First, I want to honor a woman that helped me grow and mature.

Second, I want to share a few thoughts about Hungary.

I would like to honor Donnie Tisdale.  She was a dear family friend and our most loved babysitter.  She dies this week at the age of 97 (sign me up for that).  Since we are in Europe, we will miss her funeral.  Here is what I asked my family to read:

“I am at a loss of what to say.  There are few aspects of my life that I regarded as pure and good.  My parents are one example.  Donnie was another.  She always modeled optimism and positivity.  She was unfailingly encouraging.  She was an advisor and a friend.

I remember watching a flood from our house (1971??) and knowing that everything that OK be cause Donnie said it was,

I remember fishing with her in the Guadalupe and seeing her catch a lot more than me, but getting better with her advice,

I remember her being disappointed when I was not kind to my little brother.

Donnie lived a very full life, and her influence goes on.  She leaves a long and lovely shadow that we can all take comfort in.”

I dearly wish I could be there simply to hear everyone share their love for this wonderful woman.

But since this is a blog about travel, I will share some final thoughts about Hungary. 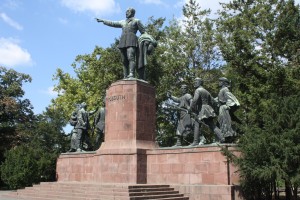 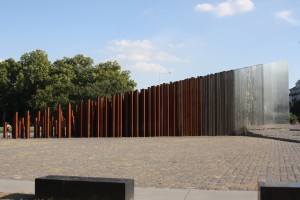 The pictures above are about Hungarian heroes.

The first is the another “dude-on-a-horse”  - this time I know the Dude. It is the Ferenc Rakoczi.  He led a rebellion against the dreaded Hapsburgs in 1703.

The rebellion was unsuccessful.

The next statue is Lajos Kossuth.  He led a rebellion in 1848 against the dreaded Hapsburgs.

The rebellion was unsuccessful.

The final one commemorates the uprising in 1956 against the dreaded Soviets.

You guessed it - it was unsuccessful.

Do you see a pattern?

This third monument is incredibly effective.  One the left, it has a series of individual humble columns that have lots of room between them.  As you go from the left to the right, the columns get closer together, taller and sleeker until they culminate in a silver ship’s prow.  The individual columns are symbolic of the individuals that were oppressed under the Soviets and then came together to create the rebellion of 1956.  I say that this uprising was unsuccessful, this is not entirely true.  On the downside, it showed with complete certainty that the Soviets would enforce their will in other “sovereign” states using their military (bad for the Hungarians), but it also resulted in Hungary having more flexibility with the Soviets than their Eastern Bloc neighbors.  People slated for execution or sentenced to life imprisonment were granted their freedom.  Their communism (called “goulash communism”) would be more open to markets and individual expression.  Do not get me wrong, freedoms were highly limited, but it was better here than in other Soviet Bloc countries.

I struggle trying to convey the history of totalitarianism to our kids.  I remember being here before the Iron Curtain fell.  People rarely smiled.  Stores were grey and had limited, low-quality items.  Every few blocks you would come across another grim-faced soldier with a fully automatic rifle.  There was palpable fear among the people.

The kids cannot connect with the concepts of limited freedom and fear.  For then, “limited freedom” means that someone else is holding the remote control.

Perhaps this is a great gift.  I should see the fact that my children cannot really understand these concepts as evidence that we live in a better world.  Admittedly, it is not a perfect one, but fewer people suffer under totalitarianism and we are not worried about nuclear holocaust.

On to Austria next.