One of my favorite stories about Susie is here love affair with Florence.  It shows her playful side and her sense of adventure, two of the attributes I adore about her.

When she was in high school, she studied German and was an exchange student to Germany.

While attending Michigan as a Sophomore, she planned a Junior Year Abroad back to Germany.  She spoke the language well and was studying it at the time.  These plans were sensible and respectable.  Kinda German, if you think about it.

During her Sophomore year, she found herself in a Renaissance Art class.  She fell in love with the sculptures, frescoes, paintings and architecture of the period.  Her inner romantic awoke. 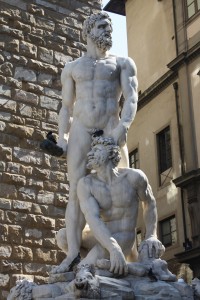 One day, a friend invited her to go to the movies and she accepted. [Do you remember the days that you would attend a movie without even asking ‘what is it?’  I love the freedom implicit in this quick and easy decision - “sure, let’s go!” Today, we have to check the internet review and arrange babysitters and decide if we want to stay out late.]

The movie was “A Room With a View”, a Merchant-Ivory period piece about Edwardian England and Florence.  The movie is a romance about love overcoming class and prejudice, but it is also a love letter to Florence.  As Susie fell for the movie, she also saw images that she had been studying in her class: il Duomo, the Piazza della Signoria, the Campinale and various masterpieces.

She left with a new, if not illogical, idea formed in her head - she wanted to study her semester in Italy, not Germany.

Not so German after all.

This plan had a few mild flaws.  First, she had zero knowledge of Italian.  Second, she had already made the arrangements for Germany.  Finally, her parents were comfortable with a return to Germany, but certainly not Italy.

She found a professor to endorse her for acceptance in a Florence-based program, won over her parents and studied here.  I think this says a lot about her.  I suspect that the woman who left the obvious and easy decision (Germany) for the crazy one (Italy) would not have married a Texan intent on summer camp.  I also like to picture her as passionate, impetuous and determined.

OK, it is not THAT hard to picture.  She has more than her share of playfulness, determination and passion - but I love seeing the 19 year-old version.

She adored her time here, as most of us do those years.  She has regaled me with stories of Ilatia for the entire duration of our relationship (almost 20 years), so I have been dying to see what she saw.  I saw what she loved about Venice.  In Rome, I might have loved it even more than she.

Today was a little bit of a deflation.  To start, we are here in the high tourist season.  She was here in February and March.  The city is more commercial that when she was here.  Fewer Florentians live here while more tour ships visit.  Places that she would visit on a whim had long lines or onerous fees associated with them.  It took a little of the magic away.

Yet the “David” was still the “David”.  The “Birth of Venus” just as lovely.  The Duomo still massive.  At the end of our day in the city, we drove the the Piazza de Michelangelo around sunset.  This Piazza is perched on a tall hill across the Arno River from most of the great Florentine buildings.  With the city bathed in the late, warm light of early dusk, the magic was all back. 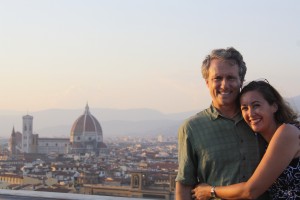 More important than the two of us, we are loving sharing the ideas and art the we love with the kids.  They are not always as excited as we are, but they have adopted an unusually healthy approach to our cultural forays.  They know that we will spend time in museums and churches and concerts that they would probably eschew on their own.  More importantly, they not only know this, but they accept and reluctantly embrace it.  I see each of them looking for the aspects that he of she connects with.  I might see a sculpture by a Renaissance master, but the boys see a decapitated Medusa.  Thats pretty cool.  If that spurs a conversation about mythology or the reason the artist chose that subject, all the better.  Susie might look at a painting of Venus and see the delicate brushwork, but it also spurs a conversation about clothing and convention during the time of the painting.

To be clear, they are not excited when the impromptu quizzes start:

But they tolerate these efforts and answer them surprisingly well.  This is related to some great advice I got from my mom.

My wise mother (the Silver Fox) has always been slow to dispense wisdom.  This certainly does not reflect a lack of wisdom on her part.  On the contrary, she is the wisest person I know.  She was the top student at UT when she attended, but I am quick to note that she is wiser than she is smart.  Her lack of advice springs instead from a Socratic belief - the more you learn, the more you realize how little you truly know.  As a result, she tends to share only rock-solid thoughts.

Here is the advice: assume your children understand far more than you think they do.  Use a full vocabulary.  Share hard concepts.  They might not get it all, but they do get two things: a) the essence of the ideas and b) the expectation that they are capable to learn hard concepts.  When we talk with them in a way that suggests that they should understand, they rise to the occasion.  We have been delighted to have entire sections of tours repeated to us or have them recognize an artistic genre.  Do not get me wrong, they will also completely miss the point at times.  But it is a delight to stretch them as see how they respond.

Just to warn you, I plan to share more wisdom from the Silver Fox in future installments.  I would recommend having a notepad handy!

Before I conclude, I had two fun moments today that Susie insists that I share.  First, a couple approached me outside the Uffizi that recognized me from my three years as chair of the Tri-State Camp Conference for the American Camp Association (the largest gathering of camp professionals in the world).  They run a small day camp outside New York.  They thought they saw a familiar face and approached us.  Kinda strange to be recognized in a foreign country.

Second, I received an email today asking me to blog for Psychology Today as an observer of youth development.  I am excited, but somewhat intimidated.  I invite any recommendations for topics for this challenge.  I am thinking about the following topics about children:

I would love to have any suggestions that you may have!