We love Barcelona. It is simply a fantastic city. So much so that we are getting to bed closer to midnight than 11PM. I cannot think of anything that we did today that I would want to take out, but it was a LONG one.

I am exhausted, but I want to share so much. With this in mind, please allow me to give you the Cliff’s Note version of the day.

We spent 4 hours in a park full of Antoni Gaudi’s Modernista architecture. Gaudi was the leader of the Modernista movement and is reason enough to come to Barcelona. The kids gat a huge kick out of him. 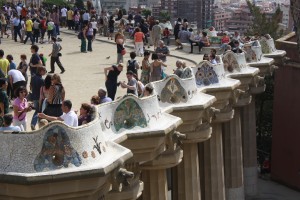 We then spent 3+ hours at an extraordinary Picasso museum. Unlike so many museums, this one did not give us too much information. Instead, we felt like we absorbed the entirety of its offerings - from Picasso’s paintings as a 14 year-old, to the blue period, to the rose period, to his imitation of other great painters (Van Gogh, Matisse and others) to cubism and the odd stuff.

After that, we walked for hours looking at buildings and drinking in the city. Barcelona has some Gothic classics as well as modern marvels.

Here is the gothic:

Here is the modern: 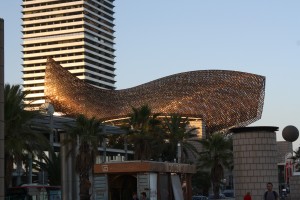 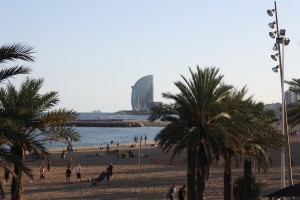 We ended by eating at multiple Tapas restaurants. Our favorite lets you eat as many appetizers as you want and then counts the toothpicks that came with them to charge you.

We then walked the last mile or so home.

I am guessing that we clocked over 8 miles today, but are happy for it.

Perhaps the best moment was at Parc Guell as the kids were posing for this shot. A man in civilian clothes blew a whistle and said in Spanish, “Get off of that and get back to school!” Liam’s new Spanish skills did this translation. We were all amused since 1) we were the 20th group within 5 minutes to take the exact same picture, 2) he was clearly a self-appointed enforcer and 3) this IS school for our kids. 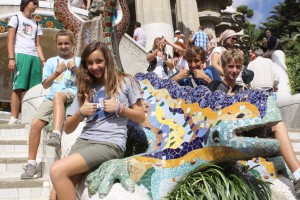 Finally, the kids have become highly amused watching the dance between the non-permitted vendors and the uniformed police. No one can perform or sell items in public without the appropriate permit. No one seems to have this permit. SO the guys selling scarves and earrings and sunglasses and decorative fans are all on a constant lookout for the authorities. The police are all fully uniformed, so they are more of a visual deterrent than anything else. When one of the vendors see a police officer, they signal their friends, grab they goods in less then 2 seconds and evaporate into the crowd (only to reappear 4-6 minutes later. Here is a scarf seller moving his gear. 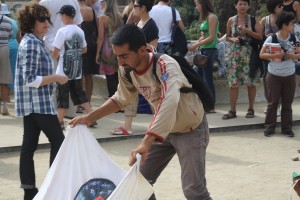 Not everyone is as fast. This guy got an earful for 15 minutes: 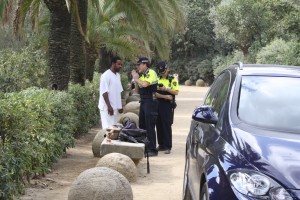 I hope to share some additional stories tomorrow. For now - it is time to sleep.