After 4 days in Barcelona, I have come to the conclusion that it is a city that was suspended in time for a couple of centuries.  When we walked around, we either saw the extremely old or the strikingly modern.

This idea is not fully formed, but let me share it nonetheless.

In paintings, we would see religious iconography in the chapels of churches.  An hour later, we would consider Picasso and Miro who went in a thousand directions with their canvases.  We, however, do not see the intermediate geniuses like Valasquez or Goya.  Just the bookends. 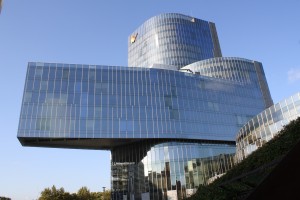 Last night, we saw two extremes in music within 30 minutes of each other.  We had seen that a festival was going on in the center of town (off La Ramblas) and we wanted to watch a band I have heard of.  On the way, we went to an awesome Tapas Bar that we had fallen in love with.  The restaurant is next to an ancient Gothic church that was hosting an International Folkchoir competition.  As we walked by, the haunting harmonies wafted by and joined us in the Placa. We entered the church (the Church of Pi - I love that) and listened to three different choirs.  Each dressed in native attire, they sang extremely formal arrangements of folk songs.  If felt more like Gregorian chants than common folk music, but it was mesmerizing nonetheless.  These stone churches with vast apses provide a magical venue for the human voice.  If, however, you were to play drum in that massive space with its hard walls, the echoes would remain for hours. 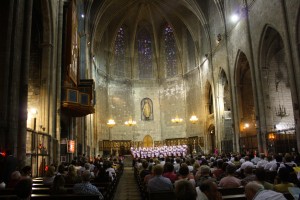 After almost 30 minutes, we reluctantly left the lovely choirs to see Pe’z, the band we wanted to hear.

Pe’z is a bit hard to describe, but I will give it a shot.  They are a Japanese jazz band that plays variations of fusion, cuban, dixie and salsa.  They speak to the Spanish audience in English.  One of their big breaks happened at SXSW in Austin.  They are wickedly talented musicians.  The keyboardist was particularly impressive and even own over the kids.  Terrill decided that he was having as much fun on stage as anyone she has ever seen.  He would dance and smile and strut and jump. 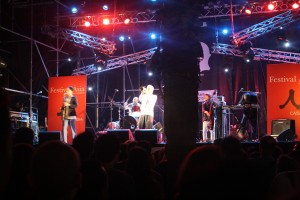 Like the choirs, they were great musicians providing excellent music.  But in true Barcelona style, we saw the extremes with little in the middle.

I am not sure what to make of this.  I think it is a real observation rooted in the realities of trade.  Before Columbus (who was funded by Spain and sailed in and out of Barcelona), trade routes focused on the Mediterranean Sea.  After Columbus, trans-Atlantic trade became the key.  For those routes, ports on the Atlantic became more important and Barcelona faded.

The city could never quite get back on top.  In the 18th century, the leaders in Madrid suppressed the patriots of Catalon and treated Barcelona almost like a hostile occupied territory.  The industrial revolution did little for the city, so the 19th century was not great.  At the end of it, they did have a creative spurt that included Picasso, Miro and Gaudi.  Those advances, however, lost ground in the middle part of the 20th Century under the fascist regime of Franco.  Franco lived until the mid-1970s.  In fact, one on the original recurring jokes of the first season of Saturday Night Live was “Generalissimo Francisco Franco is still dead.”  Spain was somewhat frozen under Franco’s rule.

Hence, Barcelona was held back for a long time.  I am not sure exactly what revived it, but I have at least two theories.  First, the great art and architecture of the turn of the century was a seed planted that awaited a favorable environment to grow.  Second, Juan Antonio Samaranch was the head of the International Olympic Committee.  A Barcelonan, Samaranch was instrumental in getting the 1992 Olympic games to Barcelona.  With the additional attention and $$ for the city, it began a hearty renewal.

Enough history.  We continue to love the trip.  We are spending the night in Valencia on our way to Grenada.  More from Grenada tomorrow.