Defending the Keep and Getting a Surprise

After a week of relative calmness, it was time for us to return to “Baskin Mode” (Wiley’s name for our travel pace).  Baskin Mode is an effort to cram a bit more into a day than a real human would do.  These days are fun, but can be draining.

We left the Aix Hotel early and headed west.  Our plan was to see the oldest and best-preserved castles in Europe, and to then arrive in our evening destination.  We have a huge distance between Florence and Barcelona, so we decided to break it into 2 days.  The first night was at the Aix, but tonight was more special.  I will explain in a second.

We approached the day with several specific goals.

First, we wanted to enjoy the drive itself.  The south of France is beautiful and we endeavor to really observe and absorb what we are looking at.  This is the countryside of many great paintings (Cezanne, Monet, Van Gogh), rich with poplars, sunflowers, haystacks, vineyards and spires.

Second, we have committed to making this trip as much an educational experience as a fun one.  Part of this effort includes listening to university level lectures that we play off my iPad.  We have been working through a 35 lecture series on the History of Literature.  Each of the lectures is 30 minutes and covers one major work (Epic of Gilgamesh, Iliad, Faust, Huck Finn, etc.).

Oddly enough, the kids have not revolted.  Liam actually requests them.  Susie always adds a period of review and discussion between the talks.  I have been surprised at how well they embrace the learning.

Of course, they are delighted for a change of pace.  What is the most requested alternative?  The NPR weekly news quiz show “Wait, Wait, Don’t Tell Me” that I download as podcasts.  Ii amuses me that they actively request a news quiz.

I am not so deluded to believe that they are capturing everything we listen to.  I have more modest, but just as ambitious, goals.  I want them to see that we value ideas.  I want them to be exposed to challenging thoughts.  I have no idea what they will retain, but this experience start to train their synapses.  Our brains work best with repetition and difficulty.  When we make it hard, the brain is more likely to remember.  When we repeat, it solidifies the connections in the brain.

Our third goal was to visit a special historic site.  Carcassonne was first founded over 2500 years ago.  Rick Steves (the wonderful travel writer for Europe) lists it as one of his favorite castle/medieval sites in Europe.

Here is a view from the road.  I have tons of great close-ups, but I love the view from a distance (even if in a moving car). 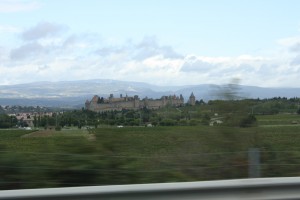 It was a rare privilege.  Built on a hill, this stronghold ignites your imagination.  Liam and Wiley envisioned the battles.  In fact, they created a game that they played for 3 hours based on the two sides of a siege attack.  Terrill came to me and said, “Honestly, I am in Hogwarts right now!”  Virginia loved learning about the people who would have worked at the castle.

This visit was full of surprises.  It was free.  It had notes in English.  It featured a massive walled city (double walled in fact) with a castle, a moat, narrow streets filled with medieval type shopkeepers and a beautiful Gothic church.

When we visited the basilica with its transcendent stained glass windows and warm glow from the candelabra offerings to various saints, a quintet sang 2 Gregorian chant-type songs.  This impromptu concert just happened.  The guys walked upfront, listened briefly to a tuning fork, and started to sing.  The music riveted me.  More striking, however, was the fact that our children were mesmerized as well.  Some beauty goes beyond cable TV and videos.   I was captivated watching my 4 children frozen listening to their song.

We were delighted to see that the Basilica features a carving of a child after a day of “Baskin Mode” travel.

We left and started the journey to our next destination.  This will seem silly, but we decided to visit a place simply on the hunch that it would make one of our children laugh.  Terrill had become fascinated with the country of Andorra.  It is really a principality (no, I do not really know the difference) and is roughly the size of Burnet County (approx. 25 miles long).

I am not completely sure why Terrill fell in love with Andorra.  The name is pretty romantic.  I suspect its small size contributes.  Heck, everything is cuter when it is small – kittens, puppies, fawns, principalities.  I know one key factor to her continued love of the place is the fact that Susie did not initially know that it existed.  When Terrill brought it up, Susie assumed it was like Genovia in “The Princess Diaries”.

Lets face it, nothing is more delicious to a teenage girl than to know something that her mother does not.  Hence, Andorra reached epic status in her mind.

Why is a principality nestled in the Pyrenees between France and Spain?  It is pretty darn remote and high up.  In fact, I think it has 3 functions:

But Terrill had become fascinated with the name.  Would the surprise please the crew?  Would this detour be worth it?  We had no idea.  But it is often worth trying something silly.

We were lucky in both regards.  Terrill and the kiddos were delighted at the surprise.  I say they were all delighted, but that is not quite accurate.  We actually had varied reactions.  Susie took a picture on the ramparts of the castle of Carcassonne as we told the kids.  Terrill and Wiley are giddy (as is the unseen Virginia).  Liam is non-plussed - somewhere between teenage ennui and confusion regarding his siblings excitement. 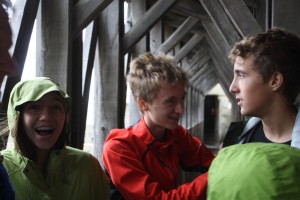 Going to Andorra was one of the best drives we have ever taken.  It was a huge zig-zagging, white knuckle climb up the mountains.  About halfway up, the road provides two options - one through a huge tunnel or a continue to climb. We avoided the tunnel and instead went over the high pass.

We ascending through the clouds and we rewarded at the top of the mountain when the sun gloriously broke through.  And then we saw something bizarre and truly unexpected.

We saw snow.  In September.

For you Texans, “snow” is apparently what happens when “rain” gets “cold”.  I know, I know, these words (cold and rain) make no sense.  Yet there it was.  Land with frozen water on it.  Apparently, water does this when it is cold.

Where does this frozen water come from?  I am told it falls from the sky.

Here are the mountains as we drove.  The temperature at the top of the mountain pass was 34 degrees. 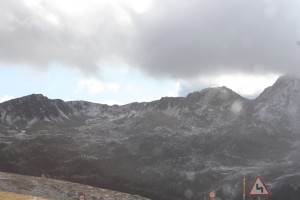 I will report more on Andorra in our next installment.