Cruisin' the Canals of Venice

Susie loves water.  Like a dolphin loves the water.

To a normal human, Venice is a bit of a tourist trap.  Here is a city of 60,000 that often has 150,000 tourist descend upon it.  They have all the hallmarks of hyper-tourism.  They have posted prices that apply only under very narrow circumstances.  For example, a $5 sandwich becomes a $7.50 sandwich if you sit down rather than order from the counter.  But if you attempt to pay at the counter, they pleasantly encourage you to sit down and wait for your panini.  Since there is not indication that price varies with the location of my posterior, we all sit and incur the $15 penalty (6 times the extra $1.50 per sandwich).

Every square has its own menagerie of hustlers, rose sellers and purse hawkers.

This is less a city than an Epcot exhibit without English.

But it is an island on the ocean and that thrills Susie.  We have one of those wonderfully simple familial relationships.  If Susie is happy, the kids and I bask in her elation.  She really has a contagious aspect to her enthusiasm.

We spend time in Venice and she sees not the hustlers, but the water busses.  We spent 90 minutes riding up and down the Grand Canal.  We saw the anachronistic facades.  We watched newlyweds wave at the city from their rooms. We adjusted to he rhythms of the waves.

We had a mellow and lovely adventure.

As a child, Susie did not want to cut her hair because she liked going to the beach and tasting the sea in her hair.  She really likes the sea.  I mean this in the she-must-have-been-an-otter-in-a-previous-life likes the sea.

Susie was happy and we were too.

We learned a lot about Venice.  This city was the seat of a meaningful empire of trading and warfare.  They ruled a large swath of sea for centuries using a particular type of ship perfectly designed for the Mediterranean.  Once warfare went to the open seas, the Spanish Armanda became the dominant power.  The city was ruled by a noble elected by the other nobles.  Think “papal election” except will less clarity.  Nevertheless, the city thrived for a long period.

Did I mention that the city is an island on the ocean and Susie loves both?  I hope so.

We ended the day with a special treat.  Laura Hill, the Senior Camper division leader for 3 years, is currently living in Italy.  She drove in to join us for a meal in Venice.  It was great to see someone that we have served with for years.  It was a delight to catch up on each other and the various people that we all mutually know. It was great to speak English to someone not named Baskin. 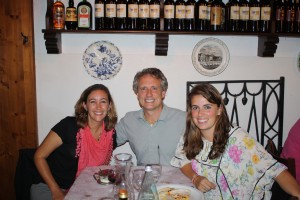 Tomorrow, we drive to Rome and have dinner with a camp family from Rome. We are so excited to see Amelie Ma’am and Luca Sir.