It feels a little patronizing to talk about a country/principality like a small pet.  I am sure that the fine citizens of this fine land would take exception to my American reaction.

[Note: being now 4.5 weeks since we last saw Fenway may have resulted in an unhealthy amount of “silly pet talk” building up in me.  Please accept my apology.  I also apologize to the citizens of Andorra.  And their adorable towns and people.  Yes you are!]

Our morning in Andorra did not disappoint.  Though, to be frank, it created confusion for me.  I have read about the travails of the European Union in general and Greece, Portugal, Ireland and Spain in particular.  I would have thought that a country dependent on luxury skiing and shopping would have had serious problems after the global ills of 2008.  In fact, they did.  They also had to deal with being listed as a “tax haven” and by the OECD.  Times were tough, but the Andorrans had a few rabbits up their sleeve.  They made it easier to invest in the country.  Foreigners could now invest up to 49% rather than 33% of companies.  It became easier to buy real estate as an outsider.

I cannot find any articles about the Andorran economy, but I did find a Wikipedia graph on GDP.  It seems to indicate that the principality has exploded since 2000 with just a small hiccup in 2008.  What I can say for sure is that the construction cranes of Europe are spending some quality time in Andorra.  I saw over 20 of them in a country smaller than most Texas counties.  Pretty impressive.

Terrill says that they are Andorrable!  I like this!

By way of disclosure, my background as an Economics major and a business student requires that I wonder about the growth or stagnation of places I visit.  But when that place is precious to one of my children, I really get focused.

To be clear, the focus means nothing to Terrill (my Andorran adorer), so I wonder who I am helping.

Here are some cool pics form Andorra before I share cool facts:

Here are the promised additional factoids about Andorra that intrigue me:

In short, we were smitten with this little locale.  Are you the best principality?   Yes you are!  YES, you are!

We then drove to Barcelona.  I can assure you that I will have much to say about Barcelona.  I LOVE Gaudi and his bizarre lines.  I also really like the people of Spain.

Even the trip into Barcelona was wonderful.  As we drove, we listened to our World Literature lecture discuss Huck Finn (which half if us have read) and we saw some unexpected beauty.

Here is a mountain range.  I have utterly failed to represent it to you.  It looks like part of a bowl that has been destroyed and left unusable.  I am not sure why this stark and craggy mountain range grabbed my imagination, but it did. 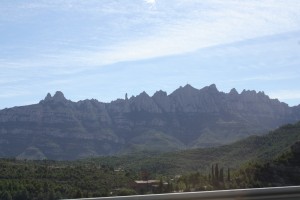 Looking forward to more about our chats!