OK, I do not have the blues from Budapest, but I am struggling with the fact that our apartment here has a virtually non-existent internet connection.  I am seriously longing for the speedy days of dial-up.

Nevertheless, I want to share a few thoughts despite the ridiculous connectivity.

Budapest is the real deal.  Had it not been subjected to 40 years of Soviet mismanagement, this city would be on par with Paris and London.  I think it would have eclipsed Madrid and Rome.  It has everything - a lovely river, awe-inspiring churches, imposing castles and grand museums.

It is different from my other visit here.  I came in 1986 while I was studying my Junior year at the London School of Economics.  Budapest was still behind the Iron Curtain and a totalitarian communist regime.  They would reject communism in 1989, but they were still Communist when I visited.  One of the reasons I came here in 1986 was the fact that Hungary had the reputation of being the country that would embrace every reform that the Soviets would allow (and some that they would not - leading to the ugly rebellion of 1958).  This is a country that is to thinkers what Ireland is to musicians - there are way more than their numbers should provide.  Hungary contributed great thinkers in mathematics, physics, music and economics.

When I came here in 1986, I found my way to a bar/restaurant at a college.  OK, it was Karl Marx University.  I met with a group of passionate and enthusiastic economics students who wanted to know everything about the West.  In particular, they wanted to understand Capitalism from the point of view of a citizen of a capitalistic country.

Their enthusiasm was both infectious and ironic.  Infectious because they deeply longed for economic and political freedom.  They wanted what we had - denim jeans, music, a free press, Coke and the right to express their opinion (not necessarily in that order).  I say “ironic” because I had been studying at the London School of Economics which was the the leader of socialist thought in the Western world.  [Note: I chose it for its location and the fact that they spoke English - I was not interesting in studying socialism in any way.  The closest I came was accidentally sitting in on a communist meeting (I thought it was the room for a seminar).  I, however, was wearing a stylish argyle sweater - they tagged me as a non-believer pretty quick.]  In any event, I had left a country (London) that benefited from Free Market Capitalism where students dreamed of Socialism.  I then visited the most industrious and successful of the Socialist countries only to find that their students longed for Free Market Capitalism.  To make it even better, we were at Karl Marx U.  Oh, and the music that night was a bad Elvis cover band.  It was one of the truly surreal experiences of my life - dancing to Elvis songs behind the Iron Curtain and discussing the elegance of the free market.  Still odd to this day.

I do not know the exact definition of irony, but I know that this counts.

There ain’t no socialism left.  To say that this city has embraced the economy of the West is to understate their commitment to hustle and entrepreneurship.  Having said that, they have done a wonderful job of preserving their most important historical sites.  Buildings must still remain under a certain height in the city center so it remains lovely. 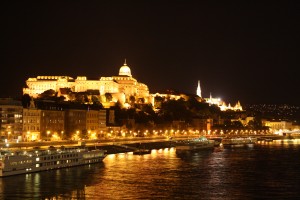 We also toured a hospital/nuclear bunker built underneath Castle Hill.  The former hospital is now a museum that documents much of WWII (the Hungarians were essentially forced allies of the Germans) and the age of Soviet control.  Going through that museum made me realize that being a small, landlocked European country is not fun.  At home, we have “6 Flags over Texas”.  The fine people of Hungary cannot count the number of flags that have flown over their country until they take higher level math.  They were pawns for the Germans and then pawns for the Soviets.  I wish I could speak Hungarian to talk with the people here.  In America, we are used to being the 600 pound gorilla of international relations.  Sure, every country might not agree with us, but they at least have to take us very seriously.  Hungary is like a country playing high stakes poker with a terribly hand.  If they play well, they at least stay in the game.  But any mistake proves highly costly.  I wonder what it is like to live in a country that is dependent on the whims of other nations (and not the other way around).

One of the best parts about the Hospital Under the Rock tour is the fact that the kids loved it.  I am never sure what they will adore and what they might roll their eyes at.  OK, I generally have a good idea (torture museums = good, museums featuring period furniture = bad), but I am never sure what will be HUGE with them.  The bunker/hospital was huge for sure.  It helped that our tour guide was fluent in English and liked our kids.  It also helped that much of the history (and the accompanying wax figures) are rooted in war, which kids think is intriguing if not cool.  My theory about why they think it is cool is that they think that can relate.  After all, Liam and Virginia feud all the time.  I think they can easily envision themselves sending troops to the field to resolve one of their petty conflicts.  One of the luxuries of youth is the belief that war is exciting and maybe even fun.  They will learn soon enough that they are wrong.  In the meantime - bring on the wax figures of soldiers in a bunker!

The final success of the Hospital Under the Rock tour was the gift shop.  I am proud that my children generally eschew gift shops.  We often go to Disney or Universal Studios, but they walk through the gauntlet of shops with cool indifference.  This gift shop, however, was different.  It was, in essence, a army surplus store.  The group that runs the tours also got access to all the supplies that were stored in the facility.  That means that have some original syringes (sorry - we did not get any for the Ill Eagles Nest), old ammo converted to lighters, camouflage and real gas masks.  I mean REAL, no-worries-if-you -drop-some-mustard-gas-on-me, gas masks.

Wiley and Liam had thought that they would avoid any souvenir purchases on this trip.  In fact, it was a point of mild honor with them: let the girls get pins and patchers and bracelets, we have no such needs.  The gas masks changed all of that.  Of course, we should not forget the practical applications.  While it is highly unlikely that Marble Falls falls victim to an attack of circe 1945 gas, it would be awful if it did happen.

Unless you are Liam and Wiley.  THEY are prepared!

Here they are with the CC Salute (the double thumbs up) while ready for some Sarin gas. 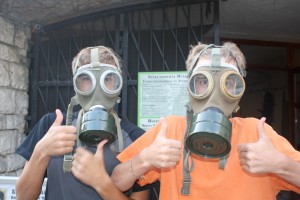 I hope none of you were harmed by Irene.  If so, you are in our thoughts and prayers.  It was a nasty event!