Note to the readers.  I remember when our children were 4-6.  The key to a good book was a lot of pictures..  Well, this is an homage to them.  The blog is not short, but it is long on photos!

This morning, we rose late again.  This is not a great pattern for us.  Sure, staying up late and sleeping in late are often the luxury of travel, but we have days every 2-4 days that require early departures.  If we were to wake early only every 8-10 days, I would think that we could easily wake early as an exception, but since this will be such a regular occurrence, I suspect that the time change will be critical for us.

In any event, we tore the children from their blissful slumber at 10 AM (3AM Texas time) to get on the move.

It is worth noting that Denmark is pricey.  I mean really pricey.  A pub hamburger is generally $20.  A small bottled water is $3 from the corner store.  We brought some protein bars with us and have adopted a cost-saving plan in which we avoid restaurants and use the protein bars to bridge the gaps between meals.

Breakfast is bread, cheese, and whatever fruit we bought in the market.  Lunch is cheese, bread and meat that we carry with us.  Dinner is whatever we can cook in our rented rooms.  We have had pasta and salad and smoked fish.

I generally find people talking about their meals to be deathly boring, so I am reluctant to share this.  I, however, include it here for two reasons.  First, we do not want people to think that we are awash on a trip of great luxury.  This trip is about learning and bonding.  Luxury and ease will come later when Susie Ma’am and I are older and without the kiddos.

The second reason that I share our food strategy is because it is a big part of our cultural education.  Going to supermarkets gets us off the tourist streets since they are generally in neighborhoods and not in the high-retail areas.  Second, you see locals in supermarkets and can ask the occasional question.  Third, we look for what is different about the foods and endeavor to try local items.  Sometimes the differences are striking.  In a blog 2 days ago, I show a wall of tubes filled with seafood-based pastes (caviar, shrimp, herring, etc).  I have never seen anything like them before, so we made a point to try them.  We want to eat local favorites as long as we do not drift too far into the realm of “delicacies”   [Note: “delicacy” is one of those horrifically deceptive words.  It sounds so nice, harmless and appealing when in reality it must mean “food that someone first ate after  losing a major wager”.  Lets review some delicacies that members of the CC team have actually eaten:

So, our goal is to find “indigenous favorites” while avoiding “delicacies”. 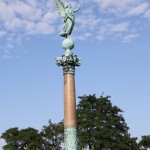 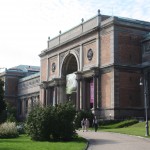 We visited Rosenberg Castle (the main residence of the Danish royals for most of their history). 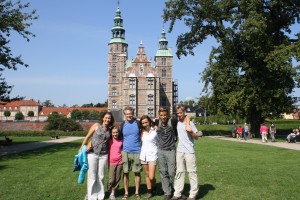 I will not regal you with tales of their crown jewels (somewhat gaudy, you would NOT wear them out) or the fact that they have wine from 1681 that is still served at special events (what if it is bad - do you send it back?).  No.  I want to comment on the quality of the portrait artists.   I have seen literally hundreds of paintings of royal children that are made to look like little adults.  Their heads and torsos are just not right.  Instead, they look like shrunken little people.  Clearly, “realism is not a buggaboo of these painters”.

OK, so you are not hook on realism, and you then found that your royal subjects are not exactly radiant.  Time to do the 17th century version of air-brushing, right?

Nope, you go for maximum realism. 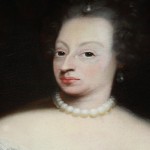 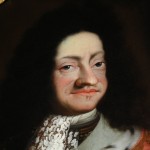 Or, you say, “let’s experiment with wax busts.  THAT will be flattering.”

Clearly, some ill-advised royal passed a law forbidding the execution of any portrait painter.  Do not get me wrong.  I completely believe that each of us should be accepted by our inner beauty.  Having said that, you can still lean a little and show your good side.  Or, perhaps you could have encouraged your portrait artist to experiment in cubism.  In any event, WOW.

We also visited the Danish National Art Museum.  It has no truly great piece and is modestly sized (at least compared to London, New York, Paris, Rome or Madrid), but this was blessing.  In art museums, the biggest difference between adults and children becomes supremely manifest.  Susie Ma’am and I see sublime beauty and remember classes we took and loved in college.  The kids want to point out battles and naked people.  Oh and horrific sculptures.  Here is a cheery one.  BTW, Denmark is called the happiest country in the world, yet this is featured as a Danish Masterpiece. 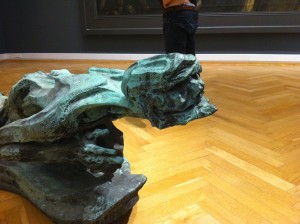 This museum, however, was not only small, but it had some exhibits that were perfect for kids.  One featured wood pallets arranged in a way that begged the question “what is the frame and what is the picture?’  Well, we did not know the answer, so Terrill and I decided to be part of the exhibit. 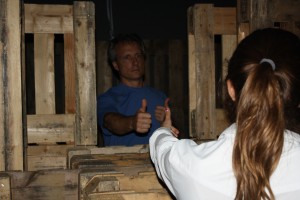 The kids also “planked” at the auditorium. 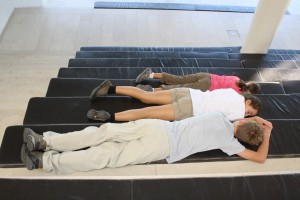 After the museum, we walked around until we came to the sculpture of the Little Mermaid (based on the Hans Christian Andersen story). To be more accurate, we came upon 6 tour busses of Germans and Japanese tourists that were all fighting to take a picture. Apparently, this is one of THE tourist spots in Copenhagen (like the Statue of Liberty, but with less clothes).  We debated whether it was worth joining the fray, but decided that we would rather have the picture even if it meant the suggestion that we look like common tourists.

At the end of our walk, we came across the Gafion Fountain.  This grand fountain commemorates a great Danish myth.  The goddess Gafion was given one night to plow land in Sweden to give to Denmark.  She did what any loving mother would do: she transformed her children into oxen and plowed the night away.  Here is the fountain of the loving mom with our own Susie Ma’am and children playing the role of the goddess (of course, she is always a goddess in my mind!) 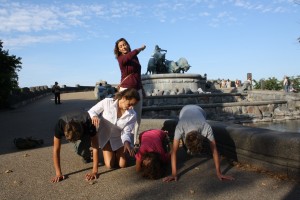 PS  I cannot leave without sharing this ego-crusher.  At one of the squares in Copenhagen, there are a series of over 30 wildlife shots.  The kids had fun looking and decided that they were looking at their siblings.  For example, Liam Sir and Virginia Ma’am do not get along. Here is what the siblings decided was them: 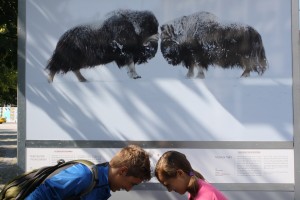 But here is what hurts.  Do they see me in the Eagle with the fish cleverly plucked from the stream?  No.  The lynx on the hillock?  No.  This is what they see in their father: