Our Day in Berlin

[Quick Note - After being unable to upload a key picture in my last Copenhagen blog “Walking in Copenhagen”, I finally found an internet connection that allowed it.  Please scroll down to it and look at the pictures at the end that show Terrill and Susie’s relative height as affected by our tilted floor.  Now back to Berlin.]

Wedensday was our day in Berlin.  I did not know what to expect, yet I had so much to think about:

Our apartment is 8-9 km out of the city, so we left the USS Enterprise poster and rode the train into the city.

We were not prepared for what we saw.

Let me say in advance that this is a longer blog (I think that makes it a “loblog” - we can never be so shy to create new words).  In fact, it is a two day effort.  I fell asleep last night at 1 before I could complete it and am finishing it the next morning.

My first impression of Berlin is its architecture which is truly striking.  In fact, some say that it is the most important city for New Architecture on the planet. Having walked the city with a booklet on architecture, I can say that I am persuaded.  A huge reason for this is the fact that a massive part of the city’s best locations were literally underneath the Berlin Wall.  Also, East Berlin did not exactly take care of the joint.  As a result, once the Wall fell, prime locations were waiting for talented architects to develop plans.

In addition, the city is also a massive repository of museums, parks and churches.

We arrived from our subway ride at the Brandenburg Gate.  It was originally built as a check-point for tradesman to assure that they paid the levy on their goods. Ironically, it would be incredibly close to the Berlin Wall and Checkpoint Charlie (the only allowed transition point between East Berlin and West Berlin.

Here is a pic of the Brandenburg Gate today, 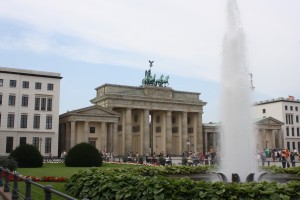 Here what it looked like duri the early part of the Cold War. 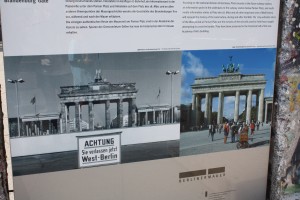 I am tempted to comment on almost everything that we saw, but let me instead just share photos with captions. 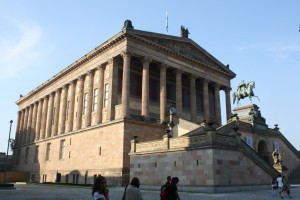 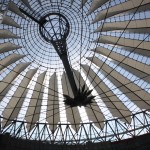 OK, for those of you who appreciate historic irony - here is a good one for you.  This is the Sony center in Berlin.  This is a Japan-Germany partnership that I can get behind.

Here are a few interesting examples of New Architecture 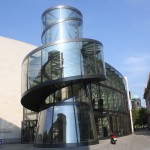 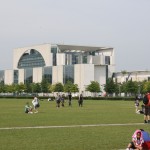 Perhaps the most powerful example of New Architecture is the Jewish Museum.  Here are two shots of it.

Here are a few examples of classic European buildings. 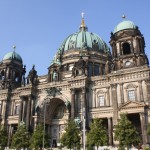 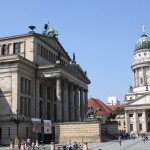 We walked and walked, making new discoveries every several minutes.  Our goal had been to arrive at a museum featuring Egyptians antiquities.  We arrived at the museum only to learn that it was already closed for the day.

I was initially disappointed until I made a fun discovery - we had just spent a day in a massive museum: Berlin itself.  We had learned history, seen beauty and contemplated horrors.  All in all, you cannot ask for more than that.

I have a few parting thoughts.

We came to a fountain that is designed to walk near or play in.

While watching this, Terrill and Susie had a chat.

Terrill: “This fountain must be so fun in the summer.”

The Berlin Wall is a real fascination for me.  I visited Eastern Europe before the Iron Curtain went down and have vivid memories of the inferior upkeep and services behind the Iron Curtain.  To think that a city was literally split down the middle is remarkable.  In a way, it reminds me of the Civil War where people’s lives were deeply effected by their geography and some families themselves were split.

We stood at a line where the wall stood and divided our family.  The girls are doing a fine job of modeling animosity.  The boys, however, fail to embrace the spirit of conflict.  As I look at the photo, I think that this probably embodies what it was really like in a split Berlin.  Some groups openly hostile to one another while others longed for unification.  Admittedly, I suspect that those longing for unification were not bowing like the Karate Kid, but you get the point.

It is also worth noting that Liam and Virginia are on opposite sides of the wall.  The car can get a little small when these two are quarreling, but I think they are bonding, albeit reluctantly.  Here they are at play. 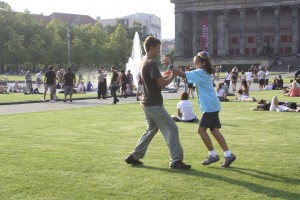 The walled not only to separate geography, but it also separates time.  Berlin was transformed by its creation and destruction.  I took this picture and was planning to erase it when Susie noticed the upper left hand corner. 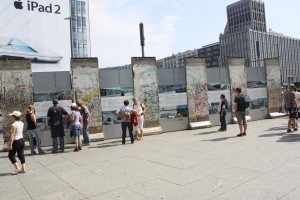 I have a distinct memory of seeing the famous “1984” Apple computer ad during the 1984 Super Bowl (http://www.youtube.com/watch?v=OYecfV3ubP8).  Considered one of the most effective commercials ever, it shows a great gathering of grey, lifeless individuals marching and sitting in unison.  They are listening to “Big Brother” on a giant black and white screen.  A lone woman (the only person in color) throws a sledgehammer into the screen, shatters it and (by implication) the spell of the autocratic oppressors.  The tagline promises the introduction of the Macintosh computer (as opposed to the tyranny of the IBM PC) and “see why 1984 will not be like ‘1984’”.  Effective ad.

Yet the imagery seems to be like a history of East Berlin.  The state was oppressive: no religious expression, back-breaking production quotas and highly limited travel. Eventually, the totalitarianism and its centralized economy self-destructed along with the Soviet Union.  Like the sledgehammer through the screen, joyful Berliners smashed the wall down (with sledgehammers).

It almost feels like the story is in this picture.  Remnants of the smashed wall with modernity, free information and new possibilities coming in from above in the form of an iPad2.  [Note: this section is not nor should it be considered an advertisement for the Apple Corporation.  Of course, if Steve Jobs and Co want to drop some endorsement cash on us, we will not say no.  Do you here me Mr Jobs?]

Time for a photo caption contest.  What is Susie Ma’am saying in this photo? 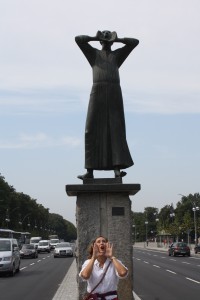 My final comment borrows from a famous Kennedy speech. During the Berlin Airlift, he made a speech in which he declared “I am a Berliner” (Ich bin ein Berliner).  After our trip, our family can say  “wir alle sind Berliner” - we are all Berliners.