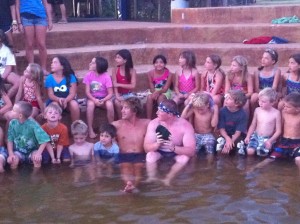 Record drought.  No rain in the forecast.

And it flooded at Camp Champions!

OK, it was a highly localized phenomenon that inundated the Coliseum during Torchlight tonight.

We plugged the drain holes in the “Pit of Pump” (the area between the seats and the stage) and ran hoses into it for an hour or so.

All the campers arrived in bathing suits and we had a great outing.  We even invited the Batter Up campers to the first part of Torchlight so that they could see what it is like.

Clearly, we did not think this all the way through.

Yes, they were there.  They absolutely had a blast.  But I am not sure they learned much about Camp Champions traditions.  They, however, did splash and laugh and splash some more.

After watching them for 10 minutes, I realized that my face hurt from smiling and laughing.  Moak Sir and Craw Ma’am continued to spray the crowd just to assure that water was coming from all directions.

Maybe we should build an ark!

Today, we started our last wave of Man Caves and Friendship Circle.  I suspect that some of you are wondering what I am talking about.

Both are gatherings in our home with individual cabins.

Before I describe them in detail, you may be interested in the origin of this very new tradition.  3 years ago, Susie Ma’am and I realized that we were becoming firemen.  OK, we were not literally firemen, but we were like firemen.

Q: When do you call a fireman?  A: When there is a fire, a car crash or the family cat is stuck in a tree.  You do not call a fireman for birthdays, family reunions or other celebrations.   No, firemen show up when bad things happen.  I am so happy that they are there, but it does not change the fact that they show up when there are problems.

Being a camp director can be like that too.  Susie Ma’am and I are aware of every homesick camper, every fever, and every conflict.  If a counselor has a death in the family, we are there.  We, however, are generally not there when a shy camper makes two new friends or when the camper with a fear of heights successfully ascends the climbing wall.  When I was a counselor (before the Earth cooled) I used to love sitting in a cabin with campers and listening to their thoughts and stories, but this does not happen much anymore.

Two years ago, Susie Ma’am had a solution.  She decided to invite every cabin to our house for one hour.  She would put blankets on the ground, sit the girls in a circle, give them sodas and treats and they would talk about fun stuff.  She called it Friendship Circle.

This is not my first rodeo.  I know that I could never get boys excited about something called “Friendship Circle”.  I would be a laughing stock.  Instead, I decided to participate in activities with the campers.  I would be in the pool every day. I would chat with campers at the wall.  I would play the occasional game of tennis.

I would come back and see Susie Ma’am laughing with the girls.  I saw that they loved it.  I, on the other hand, was getting pretty tired.  I am no longer 20 and doing a full day of activities AND being a director was wearing me out.

Nevertheless, I knew that I could not sell the boys on Friendship Circle.

It was then I got my inspiration.  I would do something different.  I, too, would invite cabins to the house, but I would then change everything.  Instead of sitting on blankets, I would tell the boys that we are sitting on skins (OK, admittedly, the ‘skins’ have “Camp Champions” written on them and they are made of sweatshirt material).  Instead of sodas, we would have beverages.  No treats, but munchies.  Finally, we would never call it Friendship Circle.  Instead, we deemed it the Man Cave.  We started last year.

OK, I shameless stole every aspect of Susie Ma’am’s gatherings.   But here is the funny part - the boys are absolutely certain that Man Cave is completely different.    Oddly enough, they are right.  They rhythm of boy conversation is so different from girls.  They girls gravitate to different topics. This year, it seems that every girl has a story about their dog and dressing up their younger brother as a princess.  I think that even girls without younger brothers share such stories.

At all of our gatherings, we make sure that every camper has a chance to talk and to share.  We also look for teachable moments in the conversation.  When campers talk about trying new experiences, we point out that they took Reasonable Risks.  If they share stories about helping someone, we talk about Reaching Out (both Reasonable Risks and Reaching Out are 2 of our 4 Rs).

We also want to make sure that they laugh and have fun.  We want them to feel part of our family - in our home, sharing food and laughing.