First Day in Sweden and Picking Up Kenny 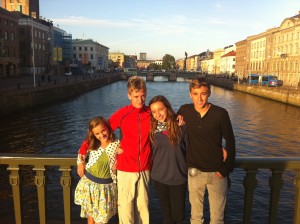 Jet lag is not to be laughed at.  It has real impact on anyone.  It, however, unfortunately affects every age very differently.

Susie and I are early risers and are canaries (sensitive to light), so we are struggling the least.  We woke with the sun at 6:15 this morning despite the fact that it was 11:15 the previous night Texas time.

Terrill (the 13 year old daughter) woke effortlessly at 7:30.  She declared that she “slept like a rocky-rock”.  She usually does not sound quite so much like a character from Barney, but heck, at least she rose easily.

Liam and Wiley (the 14 year-old twin boys) are, well, teenage boys.  Sleeping in is an art form, as is the look of indignation that accompanies an early wake-up.  They eventually arose and no blood was shed.

Virginia (the 10 year-old) is the wildcard.  She can join the world of the living gracefully and cheerfully, yet later crater at the first injustice.  This was our situation today.  She is – alternatively – the happiest and most outraged of our children.  The moods can alter quickly and inexplicably.  It is somewhat like watching two shows on the TV, except someone else controls the remote control and switches channels without warning you.

Here is an example.  As we left our hotel room to go to breakfast, she was bouncing and laughing - each step more a skip than a trudge.  This elation, however, would end soon when disaster hit. [CLICK] Yep, Liam hit the elevator “Down” button first.

It is hard to admit that we allowed such an injustice to occur.  Surely more loving parents would have saved her from this suffering.  Let’s just say the four floor ride down was not pleasant.  “Its MY job to push the buttons!” she exclaimed.

“Yes, but its my job to push your buttons.” Liam responded.

Yet as we saw the breakfast spread, [CLICK] she regained her sunny disposition.  Smoked mackerel, lox, Swedish cheese, fresh fruit and croissants seemed to fix what was ailing her.  [I will not try to explain the odd eating habits of our children.  I have read that children crave what their mother ate during pregnancy.  Susie loves seafood.  I am certainly understating this fact.  I would not be jealous if Brad Pitt were to flirt with Susie, but I would feel deeply threatened if a giant lobster with sardines were to woo her.]

We are in Gotenborg, Sweden for two nights.  We will pick up our car here which will be our chariot for the next 6 weeks.  When we were contemplating this adventure I saw an advertisement for the “Overseas Delivery Program” from Volvo.  This program is custom-made for us.  I will not bore you with the details, but let’s just say that getting some free and discounted flights, a special purchase price on a car we would have bought anyway and avoiding train passes for six will save us a substantial amount.

We are in the only car that will fit 6 and luggage, an X90.  It is Flamingo Red and is (apparently) the only one they have done in this color.  Why red?  This is a Susie idea.  I love her logic:

We will let you know if this is successful.

In 24 hours, we have seen the split personality of Sweden and Gotenborg.  Yesterday, it was beautiful – high, clear skies and 74 degrees.  The city is hosting an International festival, so there are entertainers singing and vendors selling odd items.  Everyone looked radiant as they walked around.  People smiled at strangers.

Musicians serenaded us from the canal. 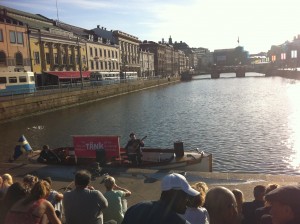 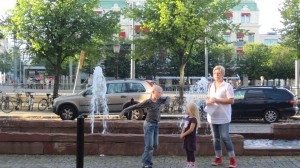 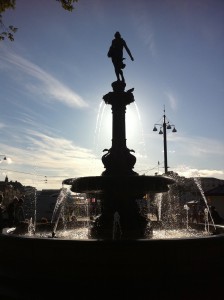 We rode on a huge Ferris Wheel and saw the city from above. 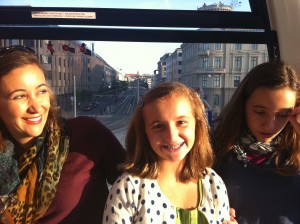 Today, we understand why everyone looked so happy yesterday.  It is grey and raining.  Apparently, Gotenborg is a lot like Portland, Oregon.  A Swedish saying helped me understand their weather better: “There is no bad weather, just bad clothes.”

Please check out this building.  It has a thermometer on its side.  It is calibrated for a maximum of 40 degrees Celsius and a minimum of 30 degrees.  This translates to a high of 104 and a low of negative 22.  This is clearly a different world from Texas.

[Note for fellow Texans.  “Rain” is apparently a type of weather during which water falls from the sky.  It is not the tears of the gods or a sign of the apocalypse.  I am told it happens frequently in many places.  Places other than Texas.]

The bad weather, however, was not a burden for us as we spent most of the day getting “Kenny”, the car.  No, I do not know why they chose “Kenny” as a name for a read Swedish car.  I would have thought “Bjorn” or “Elsa” better names, but my vote was insufficient to sway the masses.

Our trip to Volvo factory was fun.  To start, everyone we met looked as if they were sent by Central Casting looking for Swedes (“quick, get me high cheekbones and blond hair!”).  Emelie, Håkan and Janikka were all delightful.  [Note: it is VERY important to Terrill that I get Håkan’s vowels properly written.] Emelie was our main host. Håkan writes for their Volvo newsletter and they wanted to interview a participant in the “Overseas Delivery Program”.   Janikka is a factory worker.  Håkan was writing an article that I thought was lovely: have the builder of the car meet the future drivers of the car.  Janikka installed our steering wheel, airbag and air conditioning ductwork.  We are assuming she did each of these tasks well as the car drove nicely. 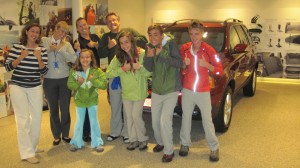 Håkan particularly amused me.  Not only does he share the name of one of our campers (how many Håkans do you know), but he also worked at a summer camp in the US when he was a college student.

Our drive back to the hotel was eventful.  Rain, unfamiliar roads and foreign languages do not make for an easy drive.

I adore my wife.  In fact, my fondness borders on the annoying.  We work together seamlessly at camp.  We travel well.  We tend to agree on family-related decisions and resolve our conflicts fairly readily.

You can throw this out the window when we are driving and get lost.  Did I take the wrong turn or did she issue the wrong directions?  Let’s just say that we managed to make a 10 mile drive into a 20 mile odyssey.  We did not so much drive to our destination as approach it in even narrowing circles – like a vulture.

One final note.  All wattage converters are not created equal. European electricity is 220/240 volts while North American is 110/120 volts.  Computers chargers include step down converters, but other devices do not.  When we left, we had two converters - light one and a heavier one.  We now have just one.  As I charged my laptop last night, we were shocked by a sudden and loud “pop”, followed by an electric burning smell.  The lighter adaptor apparently could not adapt.  To pick it up, I had to use a washcloth.  Here is what it now looks like. 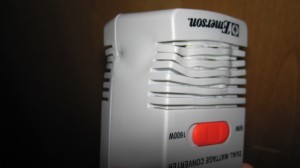 Note to self – do NOT leave anything plugged in while sleeping.