Eating at a Fortress and Arriving in Denmark

Day 3 and 4: Gotenborg picnic and trip to Copenhagen

After we picked up Kenny the car, we took a nice nap.  As noted earlier, the jet lag had affected each of us differently, but we decided that extra rest would get us settled on European time once and for all.  [Note: this is ironic foreshadowing.]

The nap gave the rain a chance to stop and we attacked the afternoon with newfound enthusiasm.  As I’ve written before, Susie loves anything that comes from the sea.  I am not sure if this would include Godzilla and military amphibious assaults, but I cannot say for sure as I have never seen an exception to this rule.  After talking with some knowledgeable Swedes about seafood, she approached me with a look of elation.  She had two pieces of news.

“The Swedes are excited. This is the season for kraftor!”  Kraftor are an indigenous crustacean that is a large Crayfish.  They are in season for just one month.  The Swedes gather them, steam them and eat them in glorious abundance.  This led to the second piece of news:

“We can buy some at the Fish Church.”

No, this sentence did not make sense to me either.  She would endeavor to explain.

Apparently, a co-op of fish mongers bought an old church and now use it to sell fresh fish.  I am certain there is some insightful metaphor here: the secularization of Europe reaches a symbolic pinnacle with the conversion of a church into a fish market.

Insightful metaphors, however, require thoughtful reflection.  Susie, in the meantime, realizes that we are 25 minutes away from kraftor with the market closing in 20 minutes! 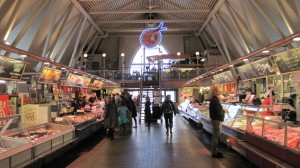 We sped-walk to the market, found one of the few Swedes who do NOT speak beautiful English and patiently purchased a heapin’ helpin’ of kraftor (2 kilos or 4.4 pounds). 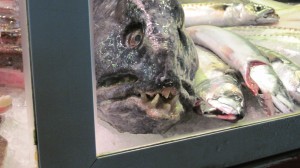 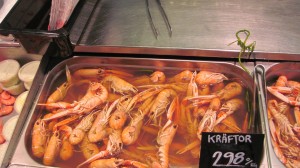 We doubled back to a supermarket and bought bread, cheese, water, apples and tomatoes for our feast.  We were helped twice by a woman who was unquestionably a Swedish model.  At the time, I did wonder why Susie chose to ask food advice from someone that clearly eats no more than 800 calories a day, but her logic was that someone that thin would really want to make her calories count.  Both the bread and the cheese were fresh and unlike any I had tried before.  Nice choices.

A few notes on supermarkets in Sweden.  They have walk-in refrigeration areas. They do not sell sushi.  A brisket cannot be found.  Most remarkably, hey sell tubes of seafood pastes: caviar paste, shrimp paste, herring paste.  The attached picture shows just a sampling. 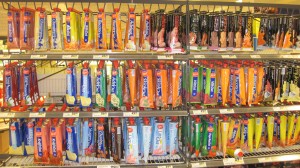 After our shopping, we hiked up to a castle/fortress atop a large hill and had a picnic. 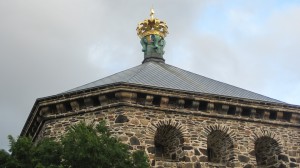 We perched ourselves atop a stone archway and ate voraciously.  The kraftor looked like crawfish, but tasted like snow crab.  Delightful. 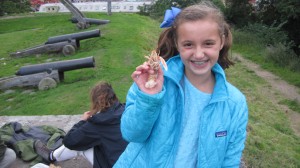 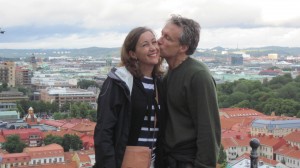 After the meal, we realized it was after 9PM and started home.  We came across the International Festival again.  We heard a loud band.  I would have called it pseudo-punk, but Liam deemed it “edgy, alternative rock”.  While I could not discern all the lyrics, I could understand she saying “I just want to get away!” at high decibels.  I was more than happy to accommodate her wishes, but I think the audience disagreed.

We then found a smaller performance that we liked a great deal: a salsa band.  As the lead singer talked to us in Swedish, I realized that we might well be seeing the greatest Swedish salsa band in the world!

OK, this is about as notable as being the best Nordic folk band in Texas, but hey – greatness nonetheless.

Susie and the girls then left early while the boys and I took in a bizarre street performance. As this is a family blog, I will not include most of the details of this performance.  Let me simply say that it involved British insult humor, fire, men in g-strings and an early departure on our part. [No pictures for this one.]

With the team in bed, I stayed up to catalog the photos and post my blog.  These tasks kept me up late (1-ish) and I went to bed knowing that we would wake and move on to our next destination.  We planned to awake at 7:15, pack, eat and be on the road by 9:15.  We had to be off in order to meet Andreas, the owner of the apartment we are renting in Copenhagen.

Remember that part about rising with the sun?  Well, apparently, the sun rises around 5:30.  Our 6:30 wake up the previous day was allowed by overcast skies and rain.  Knowing that I needed more than 4 hours of sleep, I put on a sleep mask and awaited the rest of the morning.

At 9:45, an excited Susie exclaimed “its 9:45!”  Sure, this is not the most original thing to say at 9:45, but its accuracy could not be denied.  Our luxurious morning switched to one of great excitement.  After much fumbling, we were on the road around 11:15.  We left messages for Andreas and then headed to Denmark.

The drive looked like Vermont: pines, rolling hills and lots of Volvos.

We crossed a toll bridge.  We paid with a credit card.  It took me a little time to find my Danish Kroner to Dollar conversion notes.  The conclusion – the crossing cost $57!  We should have crossed at 10km/hr to appreciate it.

We are now in Copenhagen at a location that is staggeringly central.  Andreas is my new hero.  He backed our car into the courtyard of his building.  Without seeing it with my own eyes, I would have denied the possibility of this particular driving maneuver.  At least one law of physics was stretched, if not outright broken by Andreas as he backed in (BACKED IN) a vehicle that is 74.7 inches (according to the internet) through a brick passageway that is 78 inches and not straight.  Truly impressive.