The agenda for Thursday was aggressive even under ideal circumstances.

We would leave Berlin in the morning, go to Dresden for an hour or so, drive the site of the Terezin Concentration Camp and then arrive in Prague, Czech Republic between 5 and 7 PM.

The circumstances, however, were not ideal.  I will say more of that in a bit, but simply know that we had some extra challenges today.

It started a little off.  I woke at 6AM, misread and clock and woke everyone else thinking that it was 7AM.  As usual, we were slow to move.  In fact, even slower than our glacial pace (I am sure that my error had nothing to do with this).  Nevertheless, we managed to leave Berlin (and the apartment with the USS Enterprise poster) at 8AM.

We were ahead of schedule.  We arrived in Dresden promptly at 10 AM.

Dresden was the recipient of massive bombing during World War II.  The intent of the bombing remains a source of controversy.  There were some military targets nearby, but many of them remain unscathed while over 70% of the city (considered one of  Germany’s most lovely) was flattened.  The more cynical theory is that Dresden was a reprisal for all the non-military bombing of London.  In any event, no European city suffered as much damage as Dresden.

Dresden approached its destruction and the opportunity it created in a completely different manner than Berlin did.  Of course, their challenges were in the late 1940s rather than 1990s as with Berlin after the Iron Curtain ended.  Nevertheless, it is striking to see how the different populations dealt with destroyed buildings.  As you might have read yesterday, the Berliners basically rebuilt the city relying mainly on New (Modern) Architecture.

Dresden, on the other hand, seems to say “if it ain’t broke, don’t fix it”.  They replaced statues on churches and recreated domes that are similar in almost every way with the original.  The most impressive example was the Main Church in the town center - Frauenkirche.

This Church embodies the magic of Dresden.  When they installed a new organ in 1763, JS Bach played one of the first concerts.  In 1843, Wagner premiered a major work at Frauenkirche. He chose this location because of a unique feature of its dome.  The dome had a platform in it that was roughly halfway into its height.  This platform then features a hole in it that created the effect that concert performed from there would float through the hole like the voices of angels.

Here is what it looked like after the bombings. 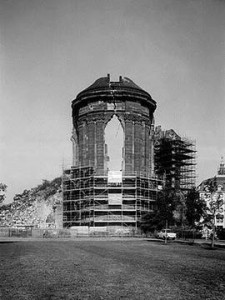 Soon after the war, the Saxon Council (the governing Protestant group) vowed to rebuild the church and to rally the town around it.  They were successful, but not immediately.  In fact, they encountered an absolute refusal from the Communists.  They had to wait for the failure of the Soviets Empire.  Once that happened, they got pretty busy.  In less than  a decade, they rebuilt it all. 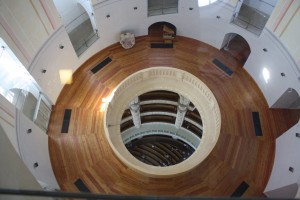 Here are a few other shots from Dresden. 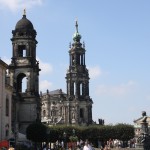 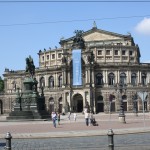 Dresden, however, was not the only thing in need of repair.

The lovely Susie Ma’am was not doing so well.  Susie often suffers from Urinary Tract Infections (UTIs).  She was having one on this day.  It was getting worse.

This is less than ideal on so many levels.  First, I simply hate seeing her in anything short of her usual happy, loving incarnation.  She does not get miserably angry or moody, but she does get quiet and a little fragile.  Lets face it - UTIs really hurt.

Second, remember that part about lacking easy-to-find bathrooms?  Yep, that makes the UTI a blast as well.  When you do find one, it requires payment.  But now that payment is in Czech Crowns.  BTW, the Czech Crowns you get out of the ATM are bills.  Toilets want coins.  Are we having fun yet?

Third, UTIs are exacerbated by dehydration.  One of the keys is to drink LOTS of water.  You see where this is going (if not re-read the preceding paragraph).  We are all trying to find that balance between minimum hydration and perpetual bathroom stops.  This hydration level is fine when you are well, but is not when you need extra-hydration.

Fourth, the kids cannot read maps in foreign languages.  As a result, we need two adults to drive and navigate through unfamiliar roads.  We have concluded that we are both good drivers, but I am a better map reader.  Let me assure you, this is not an ego thing.  There are countless skills that Susie has in greater  abundance than yours truly.  Creating a list would make this blog into an epic. [Note: if a web log is a “blog”, than what is a web epic?  Both “bepic” or “webic” seem possible. Let’s just agree that I do not need to list the ways that Susie is superior and leave it at that.]  One of the skills that I am meaningfully better at is map reading, especially when it involves switching between iPad apps and “pinching in” and “pinching out” for additional details.  I share all of this for one simple reason.  Sweet Susie could not simply sleep in the back of the car.

Fifth, think about needing medical help away from your family doctor.  For now, let’s just assume another city in the US with English, dollars and exquisite sterility.  Such a trip just screams hassle and inconvenience.

Now, assume you are in a foreign country, but one that still speaks English.  You are dealing with a different currency and none of your insurance works, but hey, they can understand “UTI”.  We have upgraded from “hassle” to “destroyer of the day”.

But wait, there’s more.  Now, lets take English off the table.  We are now in Spain or Germany.  You have enough knowledge of this language to understand basic words.  You can say “sick” or “make water”.  In other words, there is some familiarity with the language, but you have lost all subtlety.  Status has gone from “destroyer of the day” to “let me weep into my hands”.

But you are NOT in a country with a mildly familiar language.  You are in the Czech Republic. They speak Czech here.  While I am not a professional linguist, I believe that Czech is a slavic language which is (correct me if I am wrong) spawn in the depths of Hell.  It has 41 characters (versus our 26).  It has these letters in it: Á Č Ď É Ě Í Ň Ó Ř Š Ť Ú Ů Ý Ž.  Look at those things.  I think some of them are elvish.  Are we having fun yet?

Using a previously downloaded iPad map of Prague, I managed to find what looked like a hospital, or “nemocnice” in Czech.  We drive around finding that many of the roads marked on the map are under construction.  30 minutes later we arrive.

So we are at the “hospital” (I assure you, I wish I did not need to put quotation marks around the word “hospital”).  Please picture in your mind what a hospital looks like.  Here are words that I associate with hospitals.  Clean.  White.  New.  Pristine.  Efficient.  Professional.  Modern.

OK, now you look up and see this: 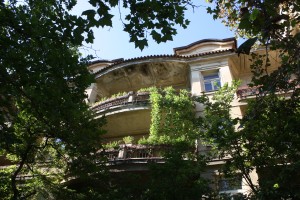 Do not worry intrepid readers, it continued for the next 10 minutes.  The receptionist could not speak anything other than Czech, so it took a few minutes to realize which language we were mis-communicating in (note: the receptionist was also the cleaning lady, I kid you not).  We were helped by a patient who was leaving the pharmacy who spoke English.  We eventually are moved from the receptionist to a nurse that looked exactly like the perfect stereotype of a 50 year-old Eastern European woman: tall, heavy, slight moustache and NO smile.

If all that happened to you, I suspect you would look even less forgiving than Susie does in this ill-timed photograph:

Here is where our tale takes a completely unexpected turn.  The doctor speaks English.  He gives her a full and professional exam including a very advanced ultrasound machine (yes, Susie can recognize the various generations of ultrasound technology like a car lover knows the generations of Ferraris).  He recommends treatment.  It takes less than 30 minutes from meeting the nurse to leaving the hospital encouraged.  It costs less than $200.  She had a plan and knew that it was not going to get worse.

Before I conclude, let me say that we like Prague and the Czech Republic a great deal already.  Here are 2 photos we took on the drive in showing the old and the new: 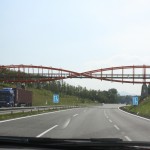 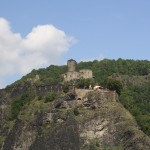 Finally, here is a picture of Prague Castle from our apartment: 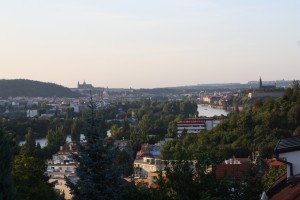 Our hosts are awesome.  Very helpful.  They gave us a tour of the area, waited while I shopped and have made calls for us.  In short, we are fans!