Batter Up, Vespers and Stories

Today was a wonderfully pleasant day.

We welcomed our Batter Up campers (one-week campers who finished Kindergarten or 1st grade this year).  Susie Ma’am and I simply love seeing them arrive.  They are at a wonderfully simple age.  They play readily, they smile readily.  If they are sad, the reasons are easy to find and correct.

They are silly and fun.

I love watching them walk around their cabins in their pajamas.

I also find myself amused at the fact that we always have some of our larger guy counselors paired with the Batter Up campers.  It is quite amusing to see a man who is 6 feet tall lead a group of 5 and 6 year olds.

Today was also delightful because the 4th term campers enjoyed having Vespers.  The girls met at the girl’s sail point while the boys met at the boy’s sail point.  Vespers is simply a time where we slow down and talk about what we value rather than what we do.

I am including a picture from the girls’ side.  They all made tie-dye shirts today, so everyone’s hands are dyed different colors. 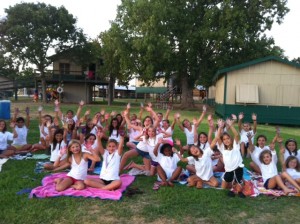 I, however, was on the boys’ side.  Here is what happened there.

We spent time discussing things we are grateful for: our families, our friends, the beauty of the evening, the breeze.  I like to point out that campers often feel closer to camp friends after one week than school friends after months.

We had “Grateful Deeds”, where campers stand and thank other members of our community for some specific deed or attribute.  One first year camper thanked a boy in his second year for helping him understand all the aspects of camp.  A counselor thanked his co-counselor for having more energy in week 12 than he had in week 1.  A camper in his 5th summer thanked a new cabinmate for his sense of humor and great attitude.

We ended with a Native American story about a young brave that was struggling with the challenges of the tribe.  The wise Chief looked at him and said the following:

“I can see into your heart.  Your are conflicted.  Within you battle two wolves: one black, one white.  The black wolf is fear, dread, defeatism and limitation.  The white wolf is love, courage, optimism and opportunity.  They battle in your mind and heart for dominance.”

“Oh wise Chief, who will win?”

I suggested to the guys that we feed our white wolf when we smile, when we try something new, when we try again if we are not successful, when we make a new friend.

Camp is a bad place for the black wolf!

Every term, our youngest 2-week campers stay in a cabin called Riggabamboo.  Living in “Rigga” is more than just an address, it is a lifestyle.  At each Torchlight, they are introduced as follows:

“And last, and certainly never least, the lovely ladies of Riggabamboo” whereupon everyone responds by saying AAAWWWW”WW”.

The girls love the attention.

One of the Rigga girls approached Susie Ma’am this morning with a concern.  She heard that new campers were coming for Batter Up (our one-week session for campers finishing Kindergarten and 1st Grade) and they would be even younger than the Rigga gals.

“Susie Ma’am, I am worried about the Batter Up girls - will they be smaller and cuter than we are?”

Once Susie Ma’am suppressed her giggles, she used this opportunity to talk about how life is not about being the cutest, but the kindest.  Nevertheless, I do love the mental image of a Rigga/Batter up Rivalry!  Kinda like the Sharks and the Jets.

On the gentleman’s side, the youngest campers are deemed “the Real Men”. Yesterday, some of them were discussing the scariest roller coaster in the world.  Apparently, one of the camper had seen a show that did a Top 10 list of roller coaster terror.

According to this ranking, the #2 most scary is called “The Drop of Death”.  Most of the campers were talking quickly and animatedly about what must be part of such an ominously named ride.  One boy, however, looked both concerned and confused.  He sat for a while in silence until the counselor noticed how uncharacteristically quiet the boy was.

“What are you thinking, Robert Sir [not his actual name]?”

“I know people like to get scared, but this sounds crazy!  Do you have to die?”

Makes you wonder what the #1 most scary roller coaster is like!

Last Friday during ExtravaGonzo, one of our 3rd year campers found a new source of awe - funnel cake production.

While everyone else was standing in line to eat to get a funnel cake, he just watched.  He watched as the cook mixed the batter, as he poured into the oil, as he retrieved it using a special tool, as he placed it on the table and as he placed the toppings on it - from powder sugar to strawberries to chocolate.

Moak Sir described his visage as beatific.  Some see true beauty in sunsets. Others in crashing waves.

This boy found transcendence watching the funnel cakes.  What do you call that?  You guessed it - funnel vision!