Siren Song of the Silicon 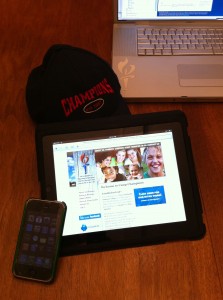 I love watching campers live in the physical world and disconnect from the virtual one.

Yet I have friends that see camp as an anachronism.  They think something like the following:

“Sure, sitting around fires, watching the stars and playing outdoor games was fun when you do not have better alternatives, but in the age of the Internet and satellite TV, we have better ways to amuse ourselves.”

I see their point.  The quantity and quality of entertainment options is staggering.  When I was a child, we had network TV with 3 channels and PBS.  These stations had children’s program for an hour in the morning and on Saturdays.  We had no Internet, no computer games and certainly no Nickelodeon.  [By the way, I realize that I’m dating myself here - I bet you fear that I am about to explain how I walked to school in the snow as well!]

When we rode our bikes and played ball, we did not have a choice. If we had the same choices that our children have, we would be spending too much time interacting with electronic screens as well (the average child in the US spends over 40 hours/week(!?!) in front of some type of electronic screen).  In fact, many of us adults do as well.

I am not among the legions that see technology as an evil that is to be feared.

I, however, do believe that we need to think through the ramifications of these changes.

Before I say more about this, let me share an analogy.  I have been talking with some doctors and nutritionists about refined carbohydrates.  It turns out that our distant ancestors ate mostly proteins and fat with some fruits and vegetables thrown in.  Massive cultivation and processing of rice, corn and wheat did not really begin in earnest until 4000-5000 years ago.  As a result, our bodies are not designed to process large amounts of simple carbohydrates.  When we started to do so, we began to put an additional burden on our pancreases and to create insulin-related issues, like diabetes.

Things are even worse when you start to introduce snacks that are specially designed to appeal to our tastes that are almost entirely simple, refined carbohydrates chips, twinkies, ice cream, sodas, etc.  Fruits and vegetables and proteins are not easy snack foods.  So the ready availability of tasty snacks that are heavy in carbs has helped lead to a massive increase in obesity and Type 2 Diabetes.

It also makes me think that the same thing might be happening with technology.  Let me stress that I am a fan of technology.   Computers, smart phones, iPads and other technology are ridiculously cool.  I am a big Apple fan and I marvel at how GPS, texting and Google can provide daily conveniences that I could not possibly imagine even 15 years ago.

I worry that I like both a bit too much.

How often do we text when a call or a personal conversation would serve better?  Do we eschew active human interaction at a party or community event so that we can watch a good movie on TV?  I know I have done both.

We are meant to be in the sun.  Spending almost all of our time indoors makes us deprived of Vitamin D, leading to various health issues (including asthma).  I also think that sunshine reduces depression.

We are meant to communicate face-to-face.  Real human interaction (including hugs, handshakes and high 5s) enables us to connect in a way that phone, email or text cannot.  Parts of our brain only feel truly connected when there is some form of physical contact.

We are meant to engage in physical activity, be it work or play.  Our metabolisms are not quite sure what to do when we drive rather than walk, work at a desk rather than a field or play a video game rather than a real game.

The more I think about this, the more I realize that camp is not an anachronism.  In fact, it is more relevant than ever for two reasons.

First, camp unplugs us from the electronic umbilical cord.  We ARE outside.  We DO talk and hug person-to-person.  We FEEL the sun and the breeze.

The second reason is a more nuanced one.  I think we have a chance to help educate kids about how their bodies react with nature and with technology.  Campers not only get to unplug form the electronic umbilical when here, but they learn how that feels.  As they get older, we even talk about the advantages of using technology without being changed (or controlled) by it.  We discuss with the older campers when texting is an asset and when it is an inferior mode of communication.  We talk about the importance of cultivating interpersonal skills that their peers are neglecting and we suggest how this will help them lead healthier, happier and more successful lives.  At Vespers, we point out the simple joys of nature and at night we celebrate the stars.

I do not want to turn back all the progress that we have.  I would not exchange the television of the 1970s for today, nor would I give up my email.  I think that the photos and blogs are a fantastic addition to the Camp experience for our families.

No, I am a fan of technology.  But I also know that it can become too pervasive, too much a part of our lives.  We are meant to interact with nature and each other.  Camp gives this gift.  And, at its best, it teaches these lessons in a way that will inform the rest of our lives!

In short, we need the ability to resist the Siren Song of the Silicon when it serves us to do so!