I am a little behind in my blog topics, so I want to do a little catch up.  This blog will look back to an event Sunday night and challenges the past two mornings.

On Sunday, we had the T-Bone Club.  Each term, we honor our oldest campers (the T-Bone Club) with a special meal.  These young men and women have finished the 8th grade are in their final summer as normal campers.  If they return next year, they enter the Senior Camper program. 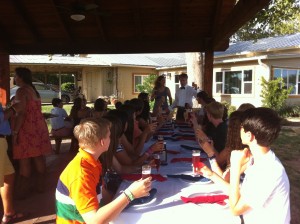 As I have shared with you, Camp is really about community.  The oldest campers are an important part of our community at Champions.  An enthusiastic group elevates the spirit of the cabins below them.  A group that is TC4CC (Too Cool For Camp Champions) can make a session seem boring and tiresome for everyone.  Happily, we have not had many TC4CC groups in a long while.  Even better, this group is particularly fun and positive.  I am particularly fond of this crew.

The T-Bone Club is our way of acknowledging their leadership in our camp family and to thank them for it.

We invite them to a meal outside our home (now in the Outdoor Cooking Pavilion) during the Sunday picnic.  The campers arrive dressed nicely (especially the ladies who all wore dresses) and are served by the Leadership Team.  They get sparkling cider in plastic flutes and we toast them.

The meal consists of steaks with a special Dry Rub that Susie Ma’am and I developed, double stuffed potatoes, green bean casserole, bread sticks, mushroom sauce and strawberry cake.  BTW, the steaks are sponsored by a much loved long-time family.  I will not embarrass them by naming them, but it was special to see their daughter IN the T-bone club in her 6th year at camp.

Susie Ma’am and I dress up as well.  I chose a kilt with tuxedo top.  Perhaps my favorite part - no one seemed to think it even slightly odd.  For those of you wondering, Scottish wool socks are not a great idea in a Texas summer.

Also Sunday night, we had our second and final Vespers. During Vespers, we slow down camp a little and reflect on our community and what values.  I love seeing all the boys - who are usually bouncing off walls - sitting attentively as we have Grateful Deeds and encourage each other.   At this Vespers, we sat at the sail point and talked about the final week of camp.

I wanted to suggest two things to the guys.  First, I wanted them to appreciate everything around them - not just the activities and the site, but the people who support and love each of them.

The swim entails swimming across the lake and back (roughly 700 meters).  We basically take over the lake, lining it with 26-30 kayaks with 3 boats providing additional help.  It is one of the longest standing camp traditions and a true challenge to our oldest campers (the oldest gals go Tuesday morning).

In the cartoons, people are often shown with an angel on one shoulder and a devil on the other.  Each is dispensing opposite advice to the main character.  I think this cartoon has it wrong.

The Warrior looks at a challenge and sees opportunity.  The Worrier sees limitation and fear.

For parents and youth development professionals, we should look for ways to feed the Warrior and starve the Worrier.  Let me be clear, I still believe that we should focus on Reasonable Risks (one of our “4 Rs”), not dangerous ones.  In my examples, I am discussing challenges that are trying, difficult, out of our comfort zone, but safely attainable.

I ended by sharing 2 stories from 5 years ago.  In the first, a camper had decided that he did not want to swim.  As a result, he jumped in the lake, swam 3 or 4 strokes, came back and declared that it was too far.  He never even tried.

During the swim, the next to last camper completed the swim in 35 minutes or so.  This camper, along with the rest of the Aquanauts, went to the cabin, changed, ate breakfast and returned to the dock to root Richard on.

Richard’s time?  One hour and 35 minutes.  Without question, it was the slowest time I have ever seen by half an hour.

I concluded by telling all the boys that they have been strengthening their Warriors.  While their friends might have been staying home and playing video games, they were climbing walls, making new friends and succeeding away from home.

While their friends stayed the same, they have become stronger and more confident.

This Monday, we had a neat example of an inner warrior.  One of our 6th graders tripped playing basketball several days ago and hurt his wrist.  It might be a sprain and it might be a hairline fracture.  Whatever it is, it hurts!  He, however, wanted to swim.  He had heard the Warrior/Worrier story.  He knew about Richard.  He wants to embrace the same challenges as his cabinmates.  He is also a good swimmer.

He began lobbying us to do the Lake Swim as soon as he realized that the he might not get to go.  He wore us down. We wrapped his splint in plastic and told him that we would pull him out of the water if he used his arm.  We kept an extra-close watch on him while he went.

It was not necessary.  He was in the first 20% of swimmers, doing the Lake Swim in less than 23 minutes (winning time was around 16 minutes) with just one arm.

Susie Ma’am and I are proud of everyone who swam this year (boys Monday morning and the girls this morning).  Everyone that was eligible swam and everyone finished with a sense of pride and accomplishment, with the last arrival getting as much applause at the first!

What a pleasure to spend time with your warriors!