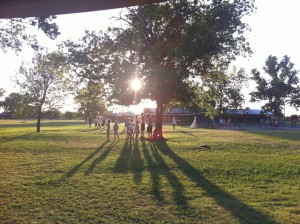 I have made reference to Friendship Circle and the Man Cave in some previous blogs.  I suspect that some of you are wondering what I am talking about.

Both are gatherings in our home with individual cabins.

Before I describe them in detail, you may be interested in the origin of this very new tradition.  3 years ago, Susie Ma’am and I realized that we were becoming firemen.  OK, we were not literally firemen, but we were like firemen.

Q: When do you call a fireman?  A: When there is a fire, a car crash or the family cat is stuck in a tree.  You do not call a fireman for birthdays, family reunions or other celebrations.   No, firemen show up when bad things happen.  I am so happy that they are there, but it does not change the fact that they show up when there are problems.

Being a camp director can be like that too.  Susie Ma’am and I are aware of every homesick camper, every fever, and every conflict.  If a counselor has a death in the family, we are there.  We, however, are generally not there when a shy camper makes two new friends or when the camper with a fear of heights successfully ascends the climbing wall.  When I was a counselor (before the Earth cooled) I used to love sitting in a cabin with campers and listening to their thoughts and stories, but this does not happen much anymore.

Two years ago, Susie Ma’am had a solution.  She decided to invite every cabin to our house for one hour.  She would put blankets on the ground, sit the girls in a circle, give them sodas and treats and they would talk about fun stuff.  She called it Friendship Circle.

This is not my first rodeo.  I know that I could never get boys excited about something called “Friendship Circle”.  I would be a laughing stock.  Instead, I decided to participate in activities with the campers.  I would be in the pool every day. I would chat with campers at the wall.  I would play the occasional game of tennis.

I would come back and see Susie Ma’am laughing with the girls.  I saw that they loved it.  I, on the other hand, was getting pretty tired.  I am no longer 20 and doing a full day of activities AND being a director was wearing me out.

Nevertheless, I knew that I could not sell the boys on Friendship Circle.

It was then I got my inspiration.  I would do something different.  I, too, would invite cabins to the house, but I would then change everything.  Instead of sitting on blankets, I would tell the boys that we are sitting on skins (OK, admittedly, the ‘skins’ have “Camp Champions” written on them and they are made of sweatshirt material).  Instead of sodas, we would have beverages.  No treats, but munchies.  Finally, we would never call it Friendship Circle.  Instead, we deemed it the Man Cave.  We started last year.

OK, I shameless stole every aspect of Susie Ma’am’s gatherings.   But here is the funny part - the boys are absolutely certain that Man Cave is completely different.    Oddly enough, they are right.  They rhythm of boy conversation is so different from girls.  They girls gravitate to different topics. This year, it seems that every girl has a story about their dog and dressing up their younger brother as a princess.  I think that even girls without younger brothers share such stories.

The boys tend to focus more on recent experiences in the cabin rather than at home.  We, however, have had a few odd stories.  One camper is sure that a trio of rouge bunnies is out to get him at his parents ranch.  I can only picture the rampaging rabbit from Monty Python as he told me this.  He had the entire cabin in stiches.  Another boy said that clouds made him think of buckets which made him think of a pot which made him think of popcorn.  I am still taking aspirin after that series of non-sequitors.

At all of our gatherings, we make sure that every camper has a chance to talk and to share.  We also look for teachable moments in the conversation.  When campers talk about trying new experiences, we point out that they took Reasonable Risks.  If they share stories about helping someone, we talk about Reaching Out (both Reasonable Risks and Reaching Out are 2 of our 4 Rs).

We also want to make sure that they laugh and have fun.  We want them to feel part of our family - in our home, sharing food and laughing.

We love our campers to think of Camp Champions as their second home. I think having them literally in our home makes it easier for them to feel this way!

It is important to Susie Ma’am and me that you know that we are parents too.

Never has that been clearer than the past few days.

This summer, our youngest child joined the other three in leaving the state to attend camp.  Each comes to Camp Champions for first term and then they have an additional away-from-home camp experience as well.

Those of you who read the June 27th blog learned about Susie Ma’am’s adventures at the airport getting the four Baskin kiddos on their planes.

They have now been at camp for less than a week and Susie Ma’am is in pure mommy mode.

On the second day, she started to scan the photos from Terrill and Virginia’s camp in North Carolina. There are three of Terrill and only one of Virginia.  I am pleased that Terrill is in so many and that we saw Virginia. Mama saw it differently.

“All of Terrill’s pictures are with friends.  Virginia is just playing tennis.  Do you think she has any friends?”

On the next day, we saw no pictures.  On the next day, another picture of Virginia alone (this time on a glob looking CONCERNED).  Again, Susie Ma’am worries about whether she is strolling the camp alone, bereft of companions.  Sure, she was smiling in the first shot, but perhaps that is just a brave front.

In her mind, Susie Ma’am knows that this is silly.

But in her heart, she worries.

On the next day, Virginia is cheek to cheek with another girl, both with freckles painted on their cheeks for some event.  Hooray!  Her isolation is not complete!  She has at least one friend!!!

But wait.  The elation fades a few minutes later.  The same girl is hugging a counselor.  Perhaps she is not Virginia’s friend.  Instead, she might be some rouge serial hugger who embraces others willy nilly.

Again, she knows better.  In her mind.

But this is still her baby.

Today, we got three letters from Virginia.  In one, she writes the following:

“Mommy, I am taking your advice.  You said in your letter ‘I miss you tons, but I hope you are not missing daddy and me.’  Well, I AM NOT MISSING YOU!  Camp is great.  Send me a watermelon.”

In another letter, she tries to share some of her newfound camp spirit.  One of that camp’s mottos is that our campers are “angels in disguise.”  Virginia is a spotty speller and she is not really an angel, so we were delighted in her interpretation that campers are all “angles in discus”.  Frankly, this sounds like a physics experiment at a track and field event more than a motto, but it helped make Susie Ma’am and me quite happy.

Have a wonderful Independence Day Weekend!