As the campers were walking to the Coliseum for Torchlight, I saw campers doing cartwheels.  I see this a lot, but it struck me today as I saw it from a distance.  These cartwheels were spontaneous bursts of joy.

Cabins of girls came together holding hands while boys walked in straight lines (or as straight as 7 year-olds can manage). 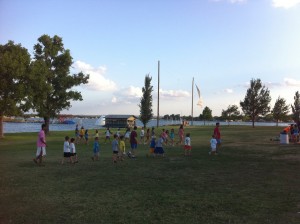 In the low sun, the girls’ side of camp look rich and colorful across the kayak cove.  I took a picture with our “Camp Champions sail” in the picture to show you. 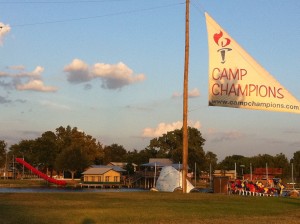 I taught the campers my “Steve Sir salute today.  It involves a double thumbs up with a HUGE smile and a good neck tilt.  I am including a picture from both the girls and the boys. 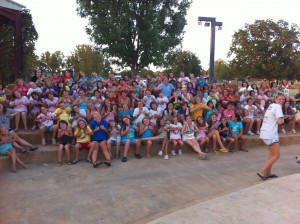 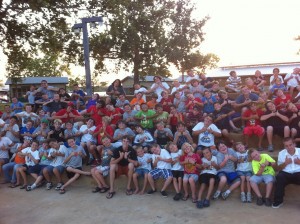 Tonight atTorchlight, a terrible robot interrupted our announcements.   Some say this robot looked a lot like our Letterman Division Leader with random pieces of aluminum foil wrapped around his midsection, arms and face, but I could not be sure.

This robot pointed to 6 counselors and silently compelled them to follow him.  We sent the other counselors to try to recover those we lost.  They left, but did not return.

We continued our announcements when the robot returned.  Using a very good robot voice, it explained that they had kidnapped the “pale carbon-based creatures” and that the campers must recapture them.

And so our “Abduction” game began!

The campers spent about 25-40 minutes looking for their counselors.  If, while they searched, a robot overlord hit them with a stun grenade (a ball), they had to return to the Coliseum.  Upon returning, the group leader (a Senior Camper for the younger cabins) would be revitalized with the “waters of life” - a bucket of water on their head.  After being thus revitalized, the team would begin the search again.

The campers all begged to be splashed as well.  They ran around giggling and yelling happily as they searched and got soaked.

One cabin decided to get their leader, secure a bunch of water balloons and then attack one of the robot overlords.  This was not in the script.  The robot overlord was taken aback.  It was a hoot.

Sometimes the simplest things can bring the easiest joy.  Each summer, I marvel at the magic of a sprinkler.  I have seen a cabin of guys play in a sprinkler for 10 minutes and be late to arrive at our fancy pool with its professionally designed water slides.

Basically, Abduction is like a giant sprinkler with a sub-plot.

At the conclusion, I saw so many beaming faces, including the counselors and the Leadership Team, er, robot overlords.

Two days ago, I wrote about the physical improvements to camp that we made since last year.

Today I would love to share a big operational change we have made to our scheduling.  Before I explain it, it is helpful to get a little bit of Camp Scheduling History.

Until 20 years or so ago, most camps simply assigned all campers to every activity regardless of age or maturity.  This system was perfect in so many ways - it enabled camps to make sure that campers get variety and that counselors can have predictable schedules.  It was efficient and made sense.

Then camp directors started to read about different ideas of youth development.  It turns out that older children (10 and up) benefit from exercising choice over areas of their lives.  Since schools rarely have the ability to do this and so much of the rest of their lives are highly scheduled, they rarely get the chance to exercise choice.  In other words, as children move from elementary schools toward college, they should get an ever-increasing level of independence and decision-making.

Also, as campers get older, they have tried many of the sports and activities have developed strong ideas about what they like and dislike.

About 6 years ago, we started to introduce a higher level of choice for our older divisions (Midis, Maxis, Lettermen and Aquanauts - essentially 4thgrade and up).  We continued to give the Rookies and Minis set schedules because we found that they “did not know what they did not know”.  In other words, they had not yet had a wide experience of activities and did not yet have direct knowledge of them.  We wanted them to sample everything first and learn new skills.

In past years, we asked campers in the older divisions to fill out Activity Preference Sheets before camp.   They would tell us their favorite and least favorite activities.  We would then create a customized schedule for every camper.  While this was an improvement, it still had some real flaws.  It assured that the least favorite activities were avoided and it put the favorite on the schedule, but that was about it.  If a camper changed his or her mind between filling out the request and camp, we did not capture that.  Most importantly, campers did not have a way to take classes with their friends.  So much of camp is about whom you do things with rather thanwhat you are doing.

After talking with dozens of camps, we have devised a new - and we believe vastly improved system.

Campers in the Mini and Rookie divisions continue to get a set schedule that gives them a broad sampling of activities.  The older 4 divisions have three periods a day where we assign them activities.   These are the water activities like Ski, Water Toys and Pool Play that every camper likes.  We then have three choice periods a day: Fine Arts, Sports and Outdoors.  At flag raising , the campers are told the options they will have in each of these areas.  They will get as few as 4 choices and as many as 6.  During breakfast, they can meet with their friends to discuss what activities sound like fun that day.  When they are scheduled for one of these areas, they congregate at a specific meeting place and select the activity on the spot.

It is much harder to schedule not knowing what activities will be the most appealing, but we decided to over-hire to assure that we could cover a wide variety until we learn what classes are most appealing.

The campers love it.  Every camper is in a class that he or she wants to be in with people that they enjoy.  We worked out the kinks first term and are now enjoying watching the campers participate in the activities that they choose.

The selection process takes roughly 4-5 minutes out of these three class periods, but the increased enthusiasm in the classes makes this absolutely worth it!