Where Are the Corn Dogs?!?

At our first day of Man Cave, I heard a wonderful tale.  Before I go further, let me say that Man Cave (and its close cousin Friendship Games) are our daily efforts to spend time getting to know every cabin.  I will describe more about the history of Man Cave/Friendship Games in soon-to-be-written blog.

On to the story.

The boys from a cabin of 12 year-olds were sharing stories.  We asked each camper to grab an item off a table and tell a story that the item reminded them of.  One boy found a carved bull’s head, held it up, and shared this tale.

“This bull reminds me of my cousin.  His family has a cattle ranch and we visit in the summers.  Last summer, we were outside playing and he decided it would be fun to tease a bull.  I did not like the idea, but he kept doing it.  I even said that he should stop after making the bull REALLY mad.

“He made the bull mad enough that the bull jumped over the fence and then started to run toward us.  We saved ourselves by jumping into a bunch of cactus! The bull stopped.  I guess he did not want to get stuck with the needles!  What an adventure!  It was one of the best days of my life.”

Amazed, I asked him, “Did you get stuck?”

“Oh, yes Steve Sir!  We got stickers all over us!”

What I noticed was his smile.  While telling the story, he was smiling ear to ear.  He clearly loved the ranch, the cousin, running from the bull.  He even loved the creative, but painful, escape into the cactus.

I was intrigued.  I then had an idea.

“Hey, that reminds me of a story about another 12 year-old boy that is kinda similar.  Do you want to hear it?”

“I have this cousin who has a cattle ranch.  I have to go there every summer to visit.  They do not have any TV or internet or Wii, so we have to play outside in the heat.  One day, my stupid cousin wanted to play around with the smelly and dirty cows.  He then decided to mess with a bull that was in a pen.  He makes it mad and I tell him to stop.  But does my idiot cousin listen?  No!  He keeps teasing the bull until it jumps over the fence.

“This bull was mad and ready to gore us.  I started to run with my fool cousin as the bull ran toward us.  The only way we could get out was to jump into some cactus.  We were pulling out needles for days.  It was the worst day of my life!!”

While I told the story, I contorted my features into the best “indignant 6th grader” face possible.

I then asked what is the difference between these stories?

They said it was the same story, but different.

I agreed.  It was 100% the same and absolutely opposite.

The details were the same.  All that changed was the attitude of the tellers.  Yet that makes all the difference in the world.

I then asked them, “After hearing your cabinmate’s version, what do you know about him?”

“I sure would not want to hang out with the guy who told YOUR version Steve Sir!”

We then had a great discussion about camp.  Every day is full of moments that can be sources of smiles or fuel for frustration.

Inspection can be an annoying requirement to clean, or an opportunity to sing and make up a skit for the inspector.

An activity that you struggle in can be a source of frustration or an opportunity to improve.

The best part - we get to choose how to interpret every moment of everyday.  It is pretty cool to have that kind of power!

Admittedly, one story will not make campers become more optimistic or positive, but I believe that the knowledge that attitude is a choice is the first step in choosing the right attitude.  We took a step in the right direction that day. 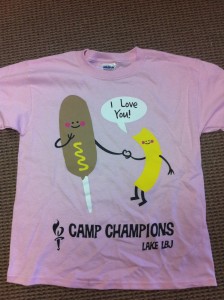 OK, I know that I just said that everything can have its positive side, but some events are more disruptive than others.  The camp had a small change that sent great ripples though our community on Tuesday.  Campers continue to talk about it to this day.  You may have even gotten a letter about it

The change?  We did not have corn dogs on Tuesday.

Yes, it is true.  There is no denying it.

I can assure you that campers have survived this tragedy, but not without a great amount of discussion.

Camp is about traditions.  Some are obvious - torchlight, Trojan/Spartan, Memory Lane, etc.  Some become important even when you are not paying attention.

Each year, after surveying campers, we make small tweaks to the menu.  But some menu items are sacred and cannot be changed. At camp, Tuesdays are “Corn Dog with Macaroni and Cheese” day.  This year, we even have a Champions t-shirt with a corn dog holding hands with a macaroni saying “I love you”.

But when we decided to have Backwards Day, we started a chain reaction.  Remember when I said that spaghetti is a BAD breakfast food and that we chose to have chicken fingers instead for breakfast?  That is where the problem started.

When looking at the menu for Backwards Day on Wednesday, Susie Ma’am realized that we would be having chicken two meals in a row - chicken fingers for breakfast and grilled chicken sandwiches for lunch.  She innocently chose to swap that lunch with the Tuesday lunch - corn dogs!

She did not know the storm that she unleashed.

Tuesday comes.  Campers and counselors approach the Fillin’ Station with visions of corn dogs going through their heads.

[Note: I have no idea why the camp has decided that corn dogs are so popular.  Sure they are tasty, but the corn dog following seems to me disproportional to the actual quality of the food experience.  This remains one of the baffling camp mysteries that confuse and amuse me.]

These excited campers now enter the Fillin’ Station and are greeted not by the happy corn dog, but by grilled chicken sandwiches (insert dramatic music here).

That night at torchlight, Shirley Sir voiced his frustration in a diatribe that lasted 4-5 minutes.  In fact, Shirley Sir declares at Flag Raising the next day that the “word of the day” was “over-reaction”, as used in the sentence “I think my response to the corn dog situation might have been an over-reaction”.

Susie Ma’am and I found all of this quite amusing.  A day later, Susie Ma’am was taking with our 10-year old daughter and explained that she was the person responsible for the Corn Dog debacle - it was she that changed the menu.

Virginia Ma’am was horrified and embarrassed to find out that her mother had made this decision. “Mommy Ma’am, you need to fix that before second term.  I don’t want the second term campers to suffer like we did!”

Please know that your child has survived this horror.  We can only hope that he or she is stronger for it!