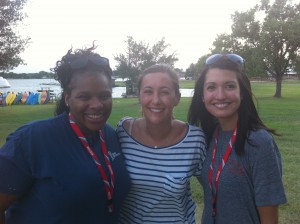 Today was another delightful day at Camp.

We had two former counselors (from 2003-2006) visit today.  They are now both teachers and have not been back for years.  They told me that they made a special playlist to listen to on the 5 hour drive, but never listened to a single note, “We just could not stop talking about Camp memories!!”  One said that camp enabled her to have the courage to switch schools and make new friends.  The other said that teacher has been so much easier because she was a counselor.

Neither were ever campers, but found camp as college-aged counselors.

Both radiated happiness as they walked and remembered.

We get visitors all the time.  One recent visitor explained, “I can leave Camp, but Camp never leaves me!” They also usually say that they cannot explain to their friends, colleagues or significant others why they love it so.

The visits are also great for the new counselors and campers.  They see the passion and joy in the visitors’ eyes.  It lets them know that this is a place that many people love – a place that people return to.  In short, it lets everyone know that we are a true community.

As I was strolling today (this time with a hat the is a full tiger head), I once again came upon the Outdoors Skills class.  They had the youngest girls (mostly 6 and 7) arriving.

It is time for some full disclosure.  6 and 7 year-olds do not really learn a lot of Outdoor Skills.  Instead, the counselors see this time as an opportunity to stretch their imagination.  As they arrived, the instructors declared (in the spirit of alliteration) that today is Throwback Thursday.  As a result, they must travel back in time to yesterday (to Wild Water Creature Wednesday).

The counselor told them to put their “flux capacitors” (they looked like towels to me) over their heads, say “flux capacitor” 3 times and turn in circles.  When they had done so, she explained that they were now back to Wednesday.  First rule – they must not go where they went yesterday (or is it today?) because their present self must not meet their past self.  They then declared that Wild Water Creature Wednesday would happen in the pool.

In the pool, another instructor led them in efforts to act out different creatures, including, dolphins, sharks, sea urchins, and otters.  By the way, one of your daughters does a scary-good dolphin imitation.  At the end, he also had them create the one thing that even sharks fear: a whirlpool.  They huddled together into a circle and swam clockwise.  The counselor, who weighs roughly 240 pounds, acted as if he were being knocked about by the midi-induced vortex.

In the Man Cave, we had a delightful chat with the youngest boys.  I was delighted by what good listeners and sharers they were.  You often do not know what you will get with 6 and 7 year-old boys, but they were funny and engaging.  Must be good parents.

Tonight, the boys’ side of camp redeemed itself.  Last week, the girls caught more fish than the boys (30-18).  Much angst on the boys’ side.  Today, they scored a clear victory 56-0!!!  Of course, it helps that the girls were not actually fishing tonight!

Rather than fishing, the girls had Miss Champini tonight, which is a big deal.  Every girl’s cabin dresses up its counselors as different people, places or themes from camp.  The entire event was precious (or so reports Susie Ma’am).  While I was not there, I got a report on the winners.

The boys had Open Mike night.  We used to call it Talent Night.  It might be best that “talent” is no longer in the title.  I, however, was proud of the 4 campers who sang, the 4 the played instruments and the 3 that told jokes!

Until tomorrow, I hope you had a great day too!