Sending Our Children to Camp

After we welcomed your children yesterday, we got a chance to say goodbye to our own early this morning.

All four of our children (Wiley and Liam - 14 yr old boys, Terrill - 13 yr old girl and Virginia - 10 yr old girl) attend first term and then go away to other camps. 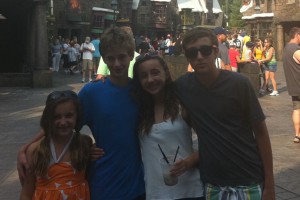 Wiley Sir goes to a 7 week camp in New Hampshire run by my best friend in camping (and a fellow member of the American Camp Association board). Liam Sir will attend a one month Spanish immersion camp (his idea!!) in Minnesota.  Terrill Ma’am and Virginia Ma’am will both go to North Carolina for 4+ weeks.  This is Terrill Ma’am’s 4th summer and Virginia Ma’am’s first.

I thought you might enjoy Susie Ma’am’s adventure this morning.

Between the end of First Session and the beginning of Second, we spent our time packing for all four of our children.  This morning, they all left.

Our children are all seasoned flyers.  What would happen next makes you doubt this fact.

Liam Sir passed on food.  He drank a soda instead.  Positioned in the far back seat and without food in his stomach, he became queasy on the drive in.

The Austin airport is not a friendly place on Monday mornings.  Many people commute out of Austin to other cities for the week.  All of them (ALL OF THEM) fly out Monday morning.

Our crew had company.

Before I go further, please remember that everyone has enough luggage for a month at camp.  No trunks, but a pair of overstuff duffles each.

After 30 minutes in the security line, Liam starts to dry heave.  The other fliers, previously crunched together to assure that no one with cut in line, suddenly give the green teen plenty of room.  The nausea reaches a peak as he is ready to go through the scanner.  He does so - wretching -   while holding one of the tubs you put your laptop in, but may never again put your laptop in.

The adventure with security, however, is not over.  Virginia’s carry-on bag is rejected.  A search reveals a massive bottle of conditioner.  When shown the size, I marveled that conditioner comes in that volume.  I am used to seeing that amount of fluid in gas tanks and small swimming pools.  She is very unhappy being separated from the conditioner.  Extremely short on sleep, she is fragile and cannot fathom how her tangled hair might compromise the safety of domestic air traffic.

The conditioner goes in the trash.

Now through security, the team is running late.  Susie Ma’am goes to get a quick breakfast tacos for the crew (hoping to avoid more gastro-issues with Liam) and instructs the boys to go to their airplane.  The 3 boys (Liam, Wiley and Riley) all start on the same plane to Baltimore.  Liam is in the last “A” group.  Wiley is in the first “B” group.  Riley is a “C”.  Liam is instructed to go onto the plane and hold seats while the other boys follow him with food.

When Susie Ma’am arrives with the breakfast tacos, Liam is on the plane, Riley is waiting, the “B”s are in line, and Wiley is nowhere to be seen.

“Riley, where is Wiley?”

“What?” (Required response of 14 year old boys when asked a question by an adult.)

“Riley, where is Wiley?”

It was then that Terrill spotted Wiley with the “B” boarders . . . in line to go to Denver.

Yet he is shooting to board the wrong plane.

They point out his error and get him into the right line.

“OK, Wiley.  When you get to Baltimore, what flight will you be looking for?”  [Hint, the answer we are looking for is “Manchester”.]

It is worth noting that Wiley is actually quite bright, but he can be in his own world.  We used to say he marches to a different drummer.  The fact is, he does not know there is a drum.

We now have confirmation that everyone has arrived safely.  Now we can concentrate 100% on our Camp Family!