Yesterday, I wrote about the physical improvements to camp that we made since last year.

Today I would love to share a big operational change we have made to our scheduling.  Before I explain it, it is helpful to get a little bit of Camp Scheduling History.

Until 20 years or so ago, most camps simply assigned all campers to every activity regardless of age or maturity.  This system was perfect in so many ways it enabled camps to make sure that campers get variety and that counselors can have predictable schedules.  It was efficient and made sense.

Then camp directors started to read about different ideas of youth development.  It turns out that older children (10 and up) benefit from exercising choice over areas of their lives.  Since schools rarely have the ability to do this and so much of the rest of their lives are highly scheduled, they rarely get the chance to exercise choice.  In other words, as children move from elementary schools toward college, they should get an ever-increasing level of independence and decision-making.

Also, as campers get older, they have tried many of the sports and activities have developed strong ideas about what they like and dislike.

About 6 years ago, we started to introduce a higher level of choice for our older divisions (Midis, Maxis, Lettermen and Aquanauts - essentially 5thgrade and up).  We continued to give the Rookies and Minis set schedules because we found that they “did not know what they did not know”.  In other words, they had not yet had a wide experience of activities and did not yet have direct knowledge of them.  We wanted them to sample everything first and learn new skills.

For the older divisions, we asked them to fill out Activity Preference Sheets before camp.   They would tell us their favorite and least favorite activities.  We would then create a schedule.  While this was an improvement, it still had some real flaws.  It assured that the least favorite activities were avoided and it put the favorite on the schedule, but that was about it.  If a camper changed his or her mind between filling out the request and camp, we did not capture that.  Most importantly, campers did not have a way to take classes with their friends.  So much of camp is about who you do things with rather than what you are doing.

After talking with dozens of camps, we have devised a new - and we believe vastly improved system.

Campers in the Mini and Rookie divisions continue to get a set schedule that gives them a broad sampling of activities.  The older 4 divisions have three scheduled periods a day for the water activities (which are the most popular and keep us all cool) and also have three choice periods a day: Fine Arts, Sports and Outdoors.  At flag raising, the campers are told the options they will have in each of these areas.  They will get as few as 4 choices and as many as 6.  During breakfast, they can meet with their friends to discuss what activities sound like fun that day.  When they are scheduled for one of these areas, they congregate at a specific meeting place and select the activity on the spot.

It is much harder to schedule not knowing what activities will be the most appealing, but we decided to over-hire to assure that we could cover a wide variety until we learn what classes are most appealing.

The campers love it.  Every camper is in a class that he or she wants to be in with people that they enjoy.

The selection process takes roughly 4-5 minutes out of these three class periods, but the increased enthusiasm in the classes makes this absolutely worth it! 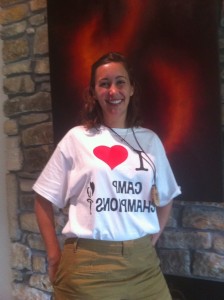 Today we had breakfast for dinner and dinner in the morning.  Members of the Leadership Team dressed like each other and we wore clothes inside-out and backwards.

We wished each other a miserable day.

Yep, it was Backwards Day!

When done right, it is a fun change of pace.  When done poorly, it really falls flat.

I bet you are wondering, “How do you mess up Backwards Day?”

Food selection.  For example, chicken fingers and corn (like we had today) are great in the morning.  Spaghetti and sauce (like 3 years ago) is not.  I am not sure why, but campers balked at pasta in the morning.

[Of course, no meal was as big a flop as our Luck o’ the Irish meal.  One look at the green mashed potatoes and green gravy and I knew we had made a dire error.  I overheard a 9th grader suggest that it was Suck o’ the Irish - I did not have the heart to chastise him.]

Back to today.  I was Susie Ma’am and she was me.  We wore the shirts that you see in the attached picture.

To be honest with you, it is hard on the brain to do backwards day.  If a camper tells you she is doing poorly, is that backwards for “great”  or does she need encouragement?  A counselor told me he would meet me in the morning (meaning after dinner).  I waited 5 minutes before I pieced it together.

So, from the bottom of my heart (or should I say the top of my mind) in the last hours of this Backwards Day - “Have a Terrible Evening!!!”