Orange You Glad We Have a Wood-Fired Oven? 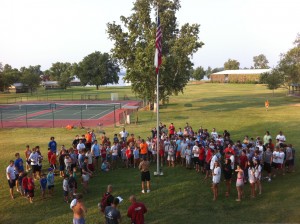 The first day of the OCP (Outdoor Cooking Pavilion) has proven to be a huge success with the first groups of campers.  It, however, has led to a bit of controversy.  More on that in a moment.

First, I would like to describe the OCP.  Built between Home Plate (our home and the office) and the Fillin’ Station, the OCP catches the wind wonderfully and with the addition of 4 big ceiling fans always has a nice breeze.  It is an open pavilion with a Viking range, convection oven, sink, refrigerator, giant smoker and a huge wood-fired oven.  I initially called the wood-fired oven a “pizza oven”, but have learned that it can do so much more.

The wood-fired oven got a starring role in today’s classes.  Before we installed this oven, I had no idea how they work.  I have been delighted with its utility.  Here is the gist of it.  Put wood inside and get a serious fire going.  Let it burn down to coals.  Sweep the ashes to the back of the domed area and check the temperature.  It will be between 800 and 900 degrees (worry not, campers are not at the opening of the oven).  In this heat, we can cook pizzas in 90-120 seconds, 1-inch steaks in 5-6 minutes and roasted veggies in 6-7 minutes.

But today we did something different – orange cake.  Check out this recipe.  Campers cut the top off their orange (like a pumpkin at Halloween) and scoop out the pulp.  Once they have an empty orange skin, they pour vanilla cupcake mix into it, put the top back on, wrap it in aluminum foil and put it into the coals.   Twenty minutes later, the counselor removes the aluminum foil covered oranges.  After giving them 5 minutes to cool, they are returned to the campers with a spoon.  They open the foil, take off the top and eat a (now orange-flavored) cupcake right out of the orange.

The first round was taken out a little early, so it had a bit of a pudding-like consistency, but it was still a hit.

So here is the controversy – how should we perfect the recipe?  We have three virtually equal camps: 1) the perfect-the-way-it-is group, 2) the just-add-some-orange-juice-and-it-will-be-better crowd and 3) pulp-is-the-key contingent.  While I am sure we can resolve this dispute, I want you to know the kinds of issues we have to deal with here.  OK, maybe not as demanding as the Supreme Court, but certainly tastier!

Occasionally, I will have parents decide to avoid a certain term of camp because their child has a birthday during the term.  I think these campers miss out.  Campers who have camp birthdays love celebrating them here.   First, our traditions are great fun (see below).  Second, they get a second celebration when they get home.  Parents will still celebrate when the camper is home, so a camp birthday is like having two birthdays.  Hard to beat that.

Here is how we celebrate here.  At lunch, the birthday camper (or counselor) arrives at his or her table to find a sign with balloons announcing the event.  After eating lunch, a long conga line of counselors emerges from the kitchen.  The leader of the line (usually the counselor or a sibling of the birthday child) holds the cake and starts the chant.  We have several different chants, including “Happy Birthday ooh-aah”,  “Its somebodies birthday – say what, say what” and “Cake upside your head”.  The cake arrives and is lit as the gatherer crowd sings “Happy Birthday”.  To be honest, I think “sing” is a bit of a misrepresentation.  We are not that big on pitch, but strong on volume.  Once the song ends, the celebrant blows out that candles and then plants his or her head into the cake.  Occasionally, the camper will opt out of the face-plant (which is OK of course), but the ones who do put their face in the cake love doing so.

I love the icing-covered faces that emerges.  Few smiles are as pure.  On the girls’ side, there is an additional tradition.  As the entire girls’ side sings “round the table you must go”, the camper runs around the tables and shares high-5s with everyone.

The cake is then shared with the cabin and anyone else that the celebrant designates (yep, that is a nice perk).

Starting the Day with Flag-Raising

We start everyday with the same tradition – flag-raising.  Oddly enough, we never think to take any pictures of this gathering, so we took a few this morning.

I like this gathering.  We start at 7:45 by confirming that all the our community is there.  We then sing the National Anthem and say the Pledge of Allegiance.

We then share some announcements (the day’s activities, birthdays, etc).  I also make sure to note something that I am grateful about (you will read more about this later).

We then go to the “panel of wisdom”.  The panel consists of Division Leaders and Directors.  They then share something of interest.  Jeff Sir, the Lettermen Division Leader, is sharing Facts from Obscure Sports.  Today, we learned about the one – and only – Underwater Swimming competition in the 1900 Paris Olympics.  Apparently, the murkiness of the Seine and the shortness of the actual event doomed it to be a terrible spectator sport.  Robbie Sir, the Activity Director, shares “Take Flight with Robbie”.  A former airline analyst, he is sharing facts from the airline industry.  For example, we learned that the retiring of the Concorde cut the top speed of commercial flight in half.

Shirley Sir then gives us a “Word of the Day”.  Whenever the word is spoken by a counselor, campers respond with a particular hand motion and sound (non-offensive, but hard to describe).

After we conclude, the Rookies go to breakfast, the Letterman have the Sports Update and the Aquanauts have “Aquanautics” (which usually involve some game or activity).

The purpose of flag-raising is to start the day with intentionality.  We show respect and gratitude for our nation and lifestyle.  We have fun.  We get active.  The shared ritual creates community.  We model a culture of appreciation.  In short, we start like Champions!

BONUS JOKE FROM TORCHLIGHT (courtesy of the men of cabin 13)

Q: “Why does a chicken coop have 2 doors?

A: “Because if it had 4 doors it would be a chicken sedan!”