Diversity at Camp Plus a Few Fun Stories 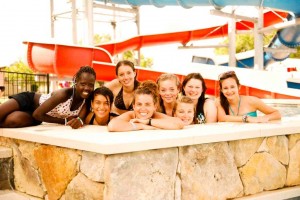 We often talk about “Reasonable Risks”.  Today, I am taking one myself.

Before I tell you about my reasonable risk, let me start by telling you about an email and a project.

The email was from one of our long-term families.  In it, a mom thanked us for being part of her children’s lives.  She said that camp is an environment that promotes confidence, love and growth.  She asked if “there were any way to support camp”.

This made me think about a project that we are working on.  When I say “we” I mean two groups: 1) the Camp Champions family and 2) the American Camp Association.  Both groups believe that camps are extremely powerful youth development experiences.   We understand that camp helps promote resilience, optimism, 21st Century skills and confidence.  This is fantastic.

During the non-summer months, we have a program called The Outdoor School that provides outdoor education to schools.  We serve both public and private schools.  I love seeing such diversity of children enjoying the activities and learning at Camp.

But during the summer, we have much less diversity.  Too little diversity.

As a result, we have committed to finding ways to change this, but it is not easy.  There are two major challenges to our efforts.

First, there is a cultural challenge.  People who do not go to camp are much more reluctant to send their children to camp when they are parents.  If you never went to camp and you do not know anyone that attends camp, it seems truly foreign. Generally, people in non-Caucasian communities have not attended camp and do not know many people who do.  As a result, camp is seen entirely differently.  Whereas our camp parents see camp as a gift that they give to their children, non-camp parents often say I love my child, why would I send him/her away?”

Unfortunately, as a Caucasian, I do not have credibility with communities of color.  I am an outsider.   Parents are rightly protective of their children.  When someone suggests that you send them to “strangers”, it simply does not seem appealing. When I attempt to recruit campers of different ethnic backgrounds, they have little reason to listen to me.

I am endeavoring to partner with different individuals and groups to introduce Camp Champions and the benefits of the summer camp experience to more diverse communities.  We are at the early stages of our efforts, but we are finding that parents are excited about camp once they really learn about the advantages.

The second problem is financial.  Camp is not inexpensive, particularly when we are committed to create one of the best camps in the nation.  We have a scholarship program and Susie Ma’am and I personally fund half a dozen campers.  If, however, we want to make a true impact on our diversity, we need to grow the scholarship program.

The American Camp Association has a scholarship fund that can designate funds for a particular camp.  The contributions are tax-deductible.

OK, here is the reasonable risk.

I hate talking about money.  I am even more uncomfortable asking for contributions.  But I think this is important.  So I need to get over my discomfort.

If you are capable and inclined, we would deeply appreciate contributions to our camper scholarship fund using the American Camp Association.  If you are interested, please email me at .

OK, that was a little uncomfortable, but I am excited at the idea of making our camp family more inclusive.

Before I go, I want to share a few cute stories before I conclude today’s blog.

One of the traditions at camp is the fact that we do not wear hats in the Fillin Station.  This becomes a source of great amusement for the Rookies (cabins 10-14) who LOVE their roles as enforcers.  The Rookies like to face the entry door to the Fillin Station and wait for a hat wearing camper or counselor to cross the threshold into the dining hall.  They can see out, so they know who is wearing a hat on the outside.  Like coiled springs, they sit as balls of potential energy.

Most campers and counselors remove their hats as the approach the door.  This, my friends, is the source of great Rookie disappointment.

Occasionally, however, the hat-wearer forgets.  But not for long.

“HAAAAAT!!!!!!!” A sonic blast of unified Rookie voices yelling “hat” serves as a not-so-gentle reminder to remove the offending chapeau.

I mention this because we have another tradition in the Fillin Station that has proven to be more problematic: the girls remain on the girls side and the boys on the boys side.  There are so many reasons that this is a great tradition, but the most important one is the fact that we like the campers to use meals as bonding times and having girls and guys constantly visiting disrupts this.

Remember the crack force of enthusiastic Rookies who are deeply devoted to the enforcement of traditions?

Yep, you see where this one is headed.

If one yells “HAT!” when a hat appears, then one should yell “girl” when a female appears.  (The same thing happens on the girls’ side when a boy visits, but just less vehemently).

About 6 years ago, these self-appointed enforcers’ passion started to get the best of them.  Yelling became finger-pointing and even (for the most passionate) pushing.

We quickly decided to end the rudeness.  Instead, we taught the boys to chant “we respect women”, a chant that occurs whenever we want to remind them that we love and appreciate the other side of camp.

This new approach has led to a new dilemma.  6 years ago, Rookies would yell at ANY female - even directors.  There are reasons that directors and nurses need to visit both sides of camp.  There, however, is not reason for counselors, senior campers or campers to visit (unless they have a sibling birthday to attend).  With the removal of the enforcement mechanism, we have started to see all kinds of visits - counselors asking to borrow shirts, senior campers wanting a brief chat.

The tradition was faltering.

I have also personally asked anyone that comes by to please respect the tradition.

We decided to allow the campers to call out “girl”, but without pointing or anything else.  This helps let me know when someone is crossing over so that I can ask them to walk around.  It is now under control and the system seems to be in balance.

Yesterday, Susie Ma’am came to visit me on the boy’s side.  As she crossed over, a few of the youngest Rookies started to yell “girl”.

An older Rookie and multi-year camper rushes over to the boys who were yelling.

On Monday and Tuesday, roughly 18 female counselors gave up all or part of their day off to see their cabin perform their “Sing-Song”.  At Sing-Song, each cabin rewrites the words to a popular song to make it about their cabin and about camp.  The girls work so hard on their singing and dancing and the counselors pour themselves into the effort as well.

I think it is lovely that they were willing to give up some of their last night off to celebrate their girls!

Today, Susie Ma’am and I invited all the Minis and Rookies to our house for Cookies and Milk.  We call it Cookies for Rookies.

Anyway, as the Rookies were eating, I was taking pictures of them using my phone.  I never use the phone as a phone in front of campers, but I find it is easy to use it for pictures for the blog.

It is worth noting that counselors are NEVER allowed to have phones in front of campers.  We want your children to know that they are the center of our attention and not an electronic screen.

As I was taking the shots, one of the Rookies commented, “Hey Steve Sir, that phone is just like the one my counselor has in the cabin!”

When he sees the counselor, he says, “I am so sorry, I think I got you in trouble.”

When I saw the counselor a few minutes later, he greeted me with an explanation that removed my disappointment in his transgression.

“Steve Sir, my phone is in the counselor lounge and has been all term except for earlier today.  My mom has her 50th birthday today and all of us in the family agreed to call at the same time.  That time was a time I was scheduled to be with the kids, so I had the phone with me.  I understand if I am in trouble.”

I told him we are not in the business of punishing people for being loving sons.  He got a pass.

Another Rookie was Susie Ma’am’s Camp Champions t-shirt and saw the number 67.

“What is that mean?”

“That was a long time ago.  Were the cavemen here then?  Is that why we had the caveman dinner the other night?”