We have passed through a fantastic portal.

We left Nepal this morning from Kathmandu’s largest airport.  This is the same airport we arrived in 10 days ago.  To remind you of our arrival, we landed after 10pm during a electrical blackout.   The building looked like it sprung from the least creative of the 1950’s architect.  The dust and pollution gave everything and everyone a faint halo.  Passport control was a byzantine trio of career civil servants who each needed to write or stamp something – all at a glacial pace.  They had 8 gates – roughly the same as Midland, Texas.

We are going to Bangkok, but we must change planes in Delhi, India.  The Delhi airport is the Ying to Kathmandu’s Yang; day to Nepal’s night.  This airport is the size of a city.  It is clean, modern, efficient and full of western brands (Mercedes, Johnny Walker, Mont Blanc, Chanel).  It is the most modern airport I have ever strolled in.

Yet it is separated from the most backwards airport by a 55 minute flight.

What makes this so odd to me is the fact that both Nepal and India have staggering levels of poverty.  The difference is the fact that the top Indians (like the top Chinese) have access to high levels of income and wealth.  I am developing a theory:

Steve Sir’s Law of Airports: the quality of a city’s airport is a function of the wealth/income of its top 5% of citizens.  In this way, Delhi and Dubai have great airports in countries with tons of poverty.

I have been thinking a great deal about life in different countries.  Yesterday, Susie had lunch with the man who organized our trek.  During their meal, he said several things that shocked me.  Tsedo is Tibetan by birth and is married to a woman who has US citizenship.  After their marriage, they lived in San Francisco for 5 or 6 years, during which they had 2 children.

They then moved to back to Kathmandu.  Susie wondered why.  Some of his answers are completely counterintuitive.

Yet Tsedo espoused the greater safety of Nepalese roads.  He, however, did offer an explanation: speed.  If you get into an accident in Kathmandu or Pokhara, you are rarely going more than 10 MPH.  In the US, we are going 35 or 70MPH.  He believes that what we gain in orderly traffic we more than lose in greater speed.

Returning from this tangent, I must tell you about our trip this morning.  Last night, Susie bought a special souvenir: an 18 pound carved wood statue of a house with the upper body of a woman and the face of a sphinx.  We are not exactly sure of the mythology surrounding her, but she is the “calming female counterpart” to her warrior male husband.  She is 2 feet tall, 3 feet long and over 100 years old. 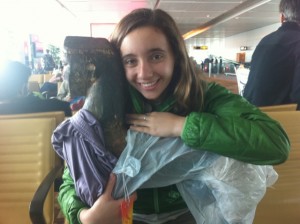 Given the late purchase, we could not arrange for shipping.  We would need to carry “Regina” onto the plane. [Note: I love the playful way kids name things they are found of.  Susie and I might have called it “the horse lady statue”, but the girls have practically given the statue her own chair at the kitchen table.]  We spent 45 minutes wrapping her with 5 pieces of long underwear to protect her paint and give some support between her legs.

We arrived 2 hours early at the airport this morning.  Upon arrival, we needed to show our passport and tickets to enter the building, whereupon we ran our luggage through the X-ray and were frisked.  We checked our luggage and then proceeded upstairs after another security check.  Upstairs, we cleared passport control and customs and spent a few minutes selling our final Nepal Rupees.  With about 15 minutes before our boarding time, we proceeded to the final security checkpoint.

Here is where is got fun.  Susie and the girls waltzed through the women’s line.  Since there are 4 men traveling for every 1 woman, the boys and I waited 15 minutes just to get to the checkpoint for the male line.  Wiley and I breezed through.  Liam, who had valiantly volunteered to shepherd Regina on her international travels, hit a brick wall.

Nepalese security guards know some English, but their vocational vocabulary does not include “woman-horse” or “antiquity” or “crazy souvenir that tickled my mom’s fancy”.

Pointing to the intricate array of tape, silk and bags, “Open, please.”

I stepped in to help.  “Are you serious?” I ask, but then become more accommodating, “Can you please loan me some scissors?”

Note that the clock is ticking.  We are past that start of the loading time.  Susie (remember that she does not like to fly) has been safely through security for 20+ minutes.  She is feeling the urgency of the plane’s schedule while watching us gesticulate and point and (now) cut quickly with scissors.

Terrill’s wrapping job was a true work of art.  It took a full 4 minutes to free Regina from her silk long underwear womb.  While we unwrapped her, I explained to the woman in charge that we got it the previous day from Kathmandu.

I thought this would suffice.  Freed from the wrapping, Regina was clearly a carved wooden statue.  No ambiguity at all.

She went through the X-Ray again.  Furled brows and concerned looks ensued.  Much pointing from the gang.  I say “gang” because the security detail has swelled to 5, with each more dour and concerned than the previous ones.

The most senior and serious of the crew approach us for a 4th interview. Throughout the process, he is lifting the statue and sniffing it.

“Where did you get this?”

I receive a disapproving glance.  Another quick sniff and we are  . . .

Mr Giggles returns.  “This is in 3 pieces. Front, middle, back.  The middle piece is black.  Solid.  What is inside?”

“When did you buy it again?”

“Middle is very dark.  We need to drill.”

At this point, poor Susie is looking at me with what appears to be mild concern, but I recognized as barely-suppressed panic.  She produces the receipt with the antique dealer’s card.  She also tells me that the flight leaves in 10 minutes.

I give the Laugh-master the receipt and explain that we have 10 minutes.

“Our flight leaves in 10 minutes.”

“That is not my problem.  It is your problem, not mine.”

I am mildly proud of my response to this comment.  Without raising my voice or seeming impatient, I calmly stated, “You are completely right.  This is not your problem at all.  But I need to be on that flight with my family.  We do not have time to drill.  You can either keep the statue or give it to me.  I will not yell either way.  But my boys and I need to join our family for our flight.”

I think I took him off guard.  I suspect he was bracing for some “ugly American” indignation.  My calm willingness to bestow an expensive 20-pound chunk of wood on him worked like conversational jujitsu.  Without making eye-contact, he simply said “go ahead”.

Luckily, our flight was delayed 45 minutes.  I say “lucky”.  The delay put me on the first flight.  It would make a 80 minute layover in a huge airport into a dead sprint, but I would deal with that next.

Since then, we have had Liam do all the heavy lifting, but then have Terrill carry the statue.  The lines for women are faster and they do not seem to think a 13-year old girl looks as threatening as an almost 15-year old young man.

They called our flight.  We passed through one additional baggage search and frisk and boarded the flight.  Happily, we had very deep overhead baggage space, providing Regina with ample room.

Since we were running late, the Air India employees escorted us through the labyrinth of the Delhi airport security.  This fast-tracking saved us at least 45 minutes.  We still needed to clear two levels of security.  Remember, we had exited a secure plane and were already in the secure part of the airport.  But we still subjected to additional searches.  [Note: a frequent traveller from Spain explained to me that the US has been pushing major airports to adopt more stringent security standards.  These almost punitive safety measures feel a little like a passive-aggressive response to this US mandate.]

With Terrill innocently cradling Regina, she passed through our expedited security.  We dashed off, happy for the help from the Air India staff, only to find that our flight was delayed over 90 minutes.

We are now airborne.

We leave the cold and the mountains behind.  Thailand and Tigers await!