I am not sure what type of blog I want to share, so I will do a three part offering.

The first shares some travel details from our adventure.

The second is a series of photos that amused me.

The last is an excerpt from a letter from a former camp counselors.

Lets start with the travel details.

As promised, we spent time in Bangkok today.  We went from our apartment to the subway to a pier.  From there, we hopped on a water taxi and rode to the Grand Palace and Thailand’s greatest temple - Wat Phra Kaew.

I will not attempt to explain the history of Thailand.  I can tell you that the modern era started in 1768-1782 when the current  dynasty began.

In 1782, King Rama I established Bangkok as his new capital.  He also chose the site for the Grand Palace and the temple Wat Phra Kaew.  Wat Phra Kaew houses the “Emerald Buddha”, which is actually made of Jasper.  It comes from northern Thailand is is deeply revered.  It is not large (roughly 3 feet high), but it is impressive.  Here is a picture I took from the outside (no cameras were allowed inside). 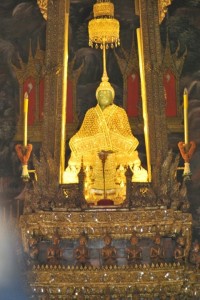 Here is a fun fact - the Emerald Buddha has 3 outfits.  One for summer, one for the rainy season and one for the winter.  There are elaborate ceremonies during which the buddha’s vestments are changed.  I wish I could capture the room.  In addition to this statue, there were two 7 foot buddhas (dedicated to Rama I and Rama II) made of gold with jewels.   This room was downright stinking in valuable items.

The entire complex was elaborate and intriguing.  Here are a few pictures: 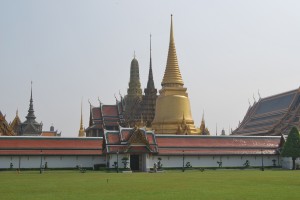 The compound is well-gauarded, with a pair of these guys at each door. 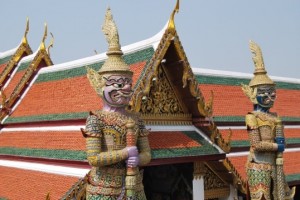 We especially liked this stupa held up with demons and monkeys: 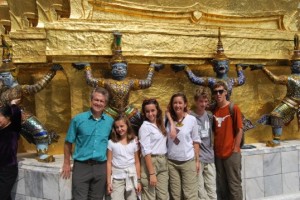 After this temple, we went to Wat Pho, the site of the great Reclining Buddha.  When I say “great”, I mean it.  This gold leaf statue (with wickedly cool mother-of-pearl feet) is roughly 50 yards long. 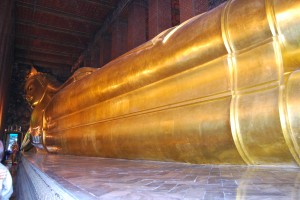 It is somewhat amusing to note that the 50-yard long buddha is housed in a room that is 54-55 yards long on the inside.  There is no room for any other statues to visit.   In an area nearby, we saw a row of meditating statues. 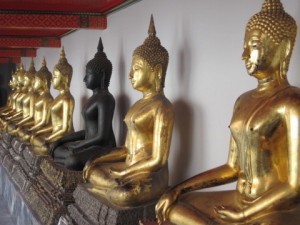 We were deeply impressed with these sites and statues.  I hope you get a feel for them in these photos.

Speaking of photos, this brings me to the second part of this blog - the fun photo portion.

While we are traveling well as a family, we do not always have a “fresh family atmosphere”.  I took this shot as the kids were “templed-out”. 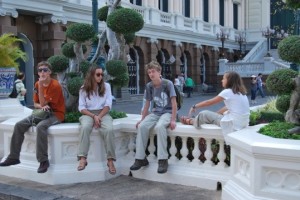 Since everyone got their fill of temples, we only looked at this one from the river: 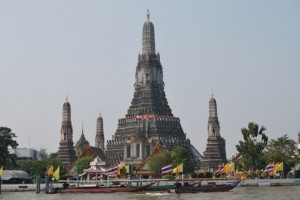 This photo has 7 heads - my daughters are on either end. 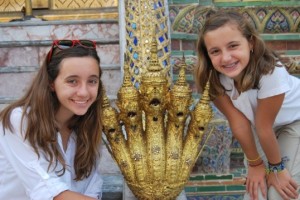 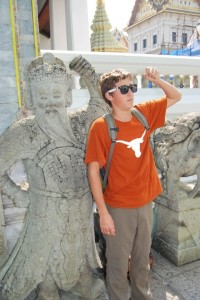 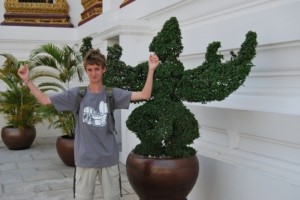 Here is a guard at the Grand Palace. 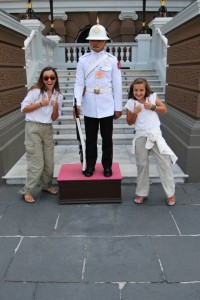 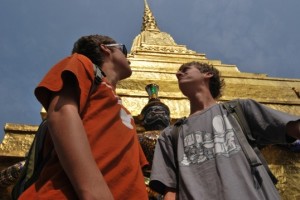 We have been happy to see that the floods have mostly receded, but there remains the occasional reminder. 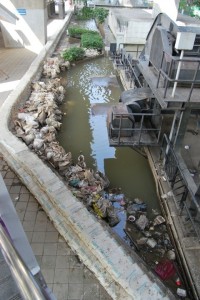 We were walking outside the temples and we walked along over one hundred vendors selling amulets, pictures, knick-knacks, etc.  This one literally turned my head. 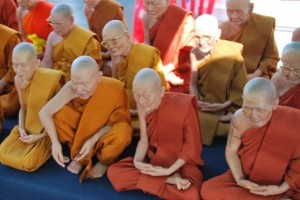 I guess this is the buddhist equivalent to a bobble-head doll.  I assume these are exact model (I mean exact!) of holy men.  Whatever they are, they are just a little too life-like for comfort.  I expected them to rise up and ask me about the “sound of one hand clapping”.

My final picture comes from the sinks in the public bathrooms in the temple complex.  They have clearly experienced a problem that I would not have foreseen. 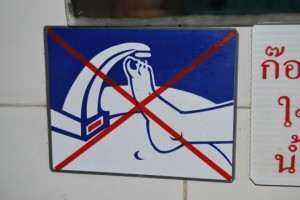 Finally, we got a nice message from a much loved counselor who worked in 2009 and 2010.  She had to miss camp for summer school last summer, so hearing from her was particularly pleasing.  I think she does a nice job of sharing some of the gifts of camp.

It has been so long since we have spoken, but I have been following your family’s adventures and living vicariously through your blog. I just wanted to take a moment while I finally have some down time after a long hard semester of chaos to let you know that this semester my eyes were opened to what Camp Champions did for me. I entered into my last year of college this past August doing my student teaching. I was able to work with second and third graders all semester teaching them and it brought me back into a little glimpse of camp.

One isolated incident I would like to share with you is with a student (for the sake of confidentiality named “Nick”) I had heard even before I met this child that he was “one of those” students. A student that was talked about a lot in the teachers lounge and not for good reasons. A student that was complained about, and called a (excuse my language but this is a direct quote) “punk little s***” Now imagine being in my position this is what you were told before even meeting this student.

Immediately I was brought back to camp and counselor orientation where you and your wife have built a life on giving counselors and campers alike a chance to become something, a chance to find a purpose, a chance to get in touch with their inner tiger. I decided to have a different perspective on this child, and not judge him by what I had heard or even by the way he acted the first day with me (which mind you was not good) I decided to act this way because I was so humbled by the fact that after I had not been the most supportive of camp’s leadership my first year you and Susie Ma’am still let me come back and find a new path and new direction, and gave me one of the most unforgettable summers of my life.

Another thing Champions taught me was about mutual respect. Often times in my profession I have seen teachers who do not treat their students with respect, but still expect to be treated with respect themselves. I have made a point of it to use “ma’am and sir” with not only my superiors but with my students as well. Now this all came full circle when after about a month working with Nick I was doing recess duty. If you all can gather anything from an elementary school child it is that recess is the golden thirty minutes of freedom for them. Well Nick decided to give up that recess time and seek me out to talk with me. He made a point of it to tell me, “I really like that when you answer my questions you say yes sir.”

I was taken aback he had noticed that and merely asked him what about it he liked. He told me that it made him feel important. Now our conversation could have stopped there and I would have been satisfied that I had made an impact, however he went on to tell me that his dad was “one of those strict parents” and he had to call his dad by yes sir and his dad was obviously important to him so by me passing on that simple word he then felt important. I am so blessed to have been in the environment you have created in Marble Falls. I think of camp daily, and there was not a moment this past summer that I did not wish I wasn’t teaching dance at Olympia or having late night talks with my Midis. Really what it boils down to is I would have not been able to really be impacted the way camp needs to impact you without you and Susie Ma’am giving me that second chance to return to camp. Thank you for everything, and have a blessed Holiday season!