When we decided to take this trip, we contacted our frequent travelers, including Susie Silver, a business school friend of Susie’s.  For the sake of clarity, I will call her Silver Ma’am.  Silver Ma’am is a truly seasoned world traveler, having been to Asia over a half dozens times.  To our delight, she had plans to be in Laos and Thailand around the same time we would be here.  We rearranged our trip slightly to spend 5-6 days with her.

Today, we linked up with her.  Here she is. 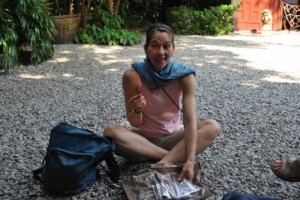 We had a full day of activities.  We started visiting the Jim Thompson House Museum (the home of an American who helped resurrect the Thai silk business), took a long walk, visited a snake farm and had a great dinner.

A sophisticated narrator would share with you the beauty of Jim Thompson’s teak home, the elegant antiques, the history of his mysterious disappearance and the witty repartee of the day.

Not this narrator.  I will instead invite you to join us at the snake farm.  I do so for two big reasons.  First, Silver Ma’am is seriously uncomfortable with snakes.  Second, this was no typical snake show.  This was the type of show only possible in a country that has never heard of OSHA or litigation.

We met Silver Ma’am at the Jim Thompson House, enjoyed the tour and then discussed the agenda for the rest of the day.  When the kids heard their choices (another Teak house, another temple or a snake farm) we got an enthusiastic and almost unanimous vote for the snakes. I say “almost” because Silver Ma’am quickly said that we could go without her and she would meet us later.

The kids really wanted her to join us and encouraged her to come as well.

I am always impressed when people face their phobias, so I was delighted when she agreed to come with us.  She suggested that she would probably hang back while we got closer, but she committed to join us.

When we got there, I was initially a little disappointed.  The place looked a little small and somewhat seedy.  We also learned that they no longer had an afternoon venom milking demonstration.  Instead, they had a “snake show” scheduled.  We had 90 minutes before it began, so we decided to look at the various exhibits.

We walked around and saw the obligatory reticulated pythons and anacondas.  We then saw a huge cage at the side.  As we approached the cage, we saw a large snake in the corner.  When we reached the corner, we saw a 6-7 foot long King Cobra with its hood spread and its attention completely on us.  While it was clearly on the other side of the cage, I still found it intimidating to be 18 inches from the large and attentive serpent.

We soon realized that there was an indoor exhibit as well that included spitting cobras, pit vipers, kraits and a wide assortment of less venomous snakes.  It was well-organized and presented in both Thai and English.  I also noticed that Silver Ma’am was becoming a bit more comfortable and engaged.

We then looked at our watches to realize it was time for the “snake show”.  I was expecting the type of show I have seen in the states.  A handler would bring out a couple of non-venomous snakes, talk about conservation and then allow a volunteer to pose with one of them.

I underestimated our Thai friends.

They announced the start of the show, asked that we stay in our area of the auditorium and then plopped a large and highly irritated King Cobra on the ground.  The snake spread its hood, rose 2 feet off the ground and hissed menacingly. 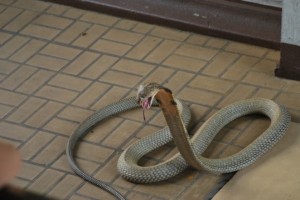 The handlers then walked around it to assure that it would remain defensive with its hood fully flared. 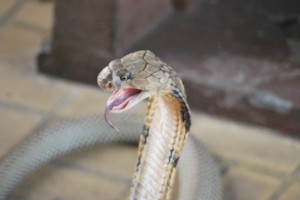 Just as this display started to lose its novelty, the presenter asked “Who would like to see how we catch them?”  One of the handlers then approached the snake, held out his left hand to the side of the snake, and grabbed its neck just below the head. 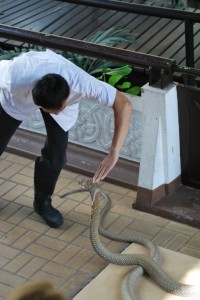 He then held it aloft with the help of a friend. 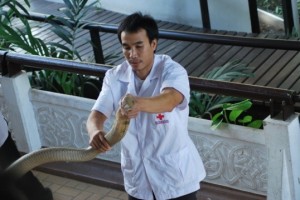 This simply shocked me.

They then dumped another venomous fellow – the Thai cobra. 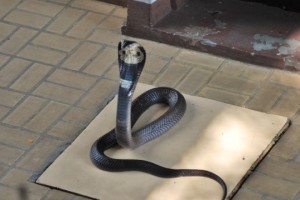 This guy had great markings and a handler that did not want to be outdone by Mr Macho King Cobra Dude.  He kept teasing the snake and putting his hand close to its face. 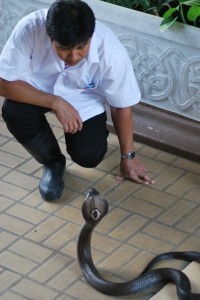 They followed these snakes with a venomous krait and several non-venomous snakes, including a rat snake.  What this guy lacked in venom, it made up for in nastiness.  It was aggressive and biting all the time. 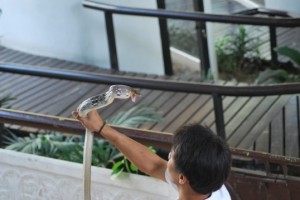 This was a snake show that impressed.

At the end, they brought out a 10 foot python to pose with anyone and everyone that wanted to do so, which ended up being everyone in the audience.

Yep, that included Silver Ma’am.  I love these shots. 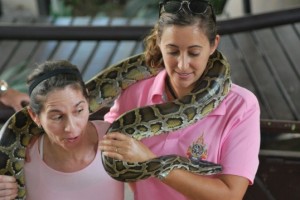 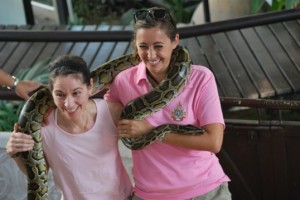 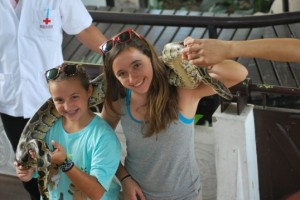 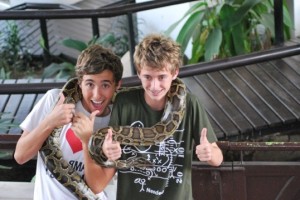 We cannot wait to spend more time with Silver Ma’am in Laos.  We leave tomorrow for Luang Prabang.