We are experiencing the extremes of beach vacations.

We started with the most radiant and remote of resorts.

We now find ourselves in a major beach community with lots and lots of stores, beach umbrellas, restaurants, sunburns, and ill-fitting bathing suits. 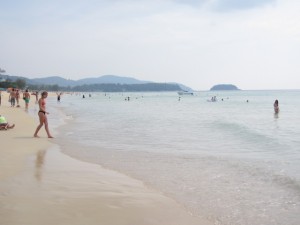 I will not subject you to photos, but let me assure you that there are some body types who should never even be in the same room as a thong bikini (females) or a Speedo (males).  While I do not want to impede human freedom, I some things should never happen.  Perhaps in the dark of night, but not when children can watch.

We have a lovely hotel that Susie found with great service and nice pools. 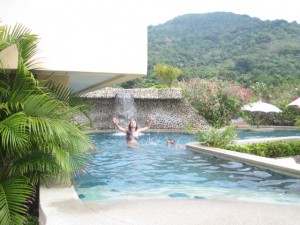 I am embarrassed that we are enjoying English satellite television.  Being in Nepal made us feel other-worldly – away from TV.  Heck, we were even away from electricity.

Now we are awash in Western entertainment.  It reminds me of last night.  We ate at the hotel restaurant.  All of us ordered Thai food, except Liam.  He ordered a hamburger.  He loves exotic food, but last night he just wanted a burger.  We are the same way.  While we have loved local music, dance, art, religion and architecture.  But we also miss home at times.  Watching a little James Bond on HBO is serving that function.

We have been trying to find a way to interest the kids in history and politics.  Certainly going to museums in Hungary helped them understand Communism and Fascism, but museums can leave the young ones flat.

Yesterday, an odd conversation became a learning experience.  Terrill and the boys suggested that each of us choose a continent.  After some discussion, we decided to draft continents based on age: Steve, Susie, Wiley, Liam, Terrill and Virginia.  Here is the result:

It soon got interesting.  Liam and Wiley quickly teamed up to create plans for world domination.  I overheard their basic plan.  China would call all the US debt, I would spend all my money repaying them (thus weakening my ability to fund my military) and then attacking me.

“I would rather not pay now.”

“I will not trade with you unless you give me the dollars.”

“OK, I will run the US presses until I have the money for you.”

“You cannot do that.”

Wiley suddenly understood why China does not hold all the cards.  He then thought of plan two.

“I petition the UN to move to a world-wide gold standard. Who is with me?”

I then declare simply that I do not recognize the UN’s authority to determine my currency.

He then said he wanted to attack me.  First via atomic bomb.

I pointed out that I have an early warning system and could easily retaliate are assure his destruction.

Each idea led to a teachable moment.  Part of the beauty of this “lesson” was the fact that everyone was actively engaged and thinking.  So much learning is passive.  In fact, it can be so passive that learning does not even happen.  When a person is engaged, he or she is participating and active.  Learning is real and deep.

Our “game” lasted the duration of a 30-minute cab ride.  They learned that the UN is important, but not omnipotent.  They learned that oceans are difficult to cross for military purposes.  They came to understand the concept of Mutual Assured Destruction.

Oh, and China (Wiley) decided to allow his currency to float openly so that he would import more and export less, thus lessening his cash surplus.

If we could just let him run China, we might be better off.