We are en route to Thailand, but this seems like a great time to share some final snippets from Nepal.

I shared pictures from the Hindu temple with the swarms of monkeys.  I thought that might be the end of our simian sightings.

On our trek, we saw three different types of monkey.  Unfortunately, Cool and the Gang did not know the English names for them, so I can only describe them.  We saw a group of 10 with black coats and white faces living on a cliff face.  We saw a group of tan monkeys the size of small Chimpanzees fighting in trees.  We also saw a pack  of smaller tan guys racing across a field as a farmer yelled at them.

We learned that the monkeys were much more common 15 years ago, but their number had thinned after the Chinese built a long dirt road through the area.

Remember when I said that the Chinese would eat anything with legs except a table?  Well, lets just say that the monkeys made meals meatier.

Back in Kathmandu, the monkeys show up in odd places, but none odder than the acreage around the airport.  They like to hang around the baggage collection area (which is outside) and play an elaborate game of tag with a group of dogs that seem to have no other purpose than to chase the monkeys.

Next to the airport is the only golf course we have seen on our trip.  In Maine, you might hit the occasional moose while playing.  All over the State, Canadian geese can make a course extra fertilized.  In central Texas, Armadillos provide extra aeration.  But I think no non-human paying companion matches these guys.  I saw one green with 12-14 monkeys awaiting the approach shots from a foursome.  Sadly, I did not see what happened next.

Do the monkeys steal the balls?  Do they improve your lie?  What is the ruling if they do?  Heck, they might help you get a read on your putts.

I make an effort to provide some interest and entertainment in my blogs, so I usually avoid describing domestic tasks like food prep and dishwashing.  But after spending a week and a half in Nepal, I have concluded that dishwashing must be a recreational pastime.  At our host home and each of the tea houses, someone was washing dishes during virtually every daylight hour.

Of course, there are no dishwashers.  Instead, the women crouch next to an open faucet behind the house/tea house wearing flop-flops and scrub each item individually.  The temperature matters not.  The location can change, but the ritual is identical.

On my scooter ride, I saw a bus absolutely packed with revelers.  When you hear “packed” you might envision tons of people inside the bus.  That would show a lack of imagination.  This bus had that, but it also had 20+ people on top of it, including a small band.  One particularly ebullient fellow was actually dancing on top as they drove.

I think they were going to or coming from a wedding.  I deemed it the “Party Bus”. 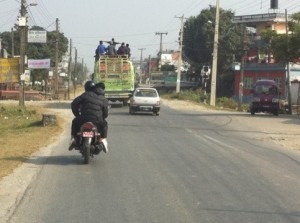 When we needed to go to Lakeview, we asked our host for the best way to travel.  Cabs are quick, but more expensive.  No native takes them.  Instead, he suggested the bus.  We would need to take one bus, change and board the next one.

The change location?  Pardi.  You can imagine my confusion when our host kept insisting that we take the “Pardi bus”, though I must say I was a tad disappointed when the actual bus did not provide a chance to dance on the roof.

The Scoop on Poop

Before we took on this adventure, we consulted with several seasoned travellers who had visited our various destinations.  We also read multiple travel guides.  One consistent warning concerned digestive disorders.

No water is safe.  No fruit or leafy vegetable is safe (since it might have been rinsed with water).

I have a dear friend who got dysentery for a week from shaking a young boy’s hand and eating afterwards.

The prevalence of parasites has become a personal challenge to Susie.  For those of you who do not know, Susie is one of the best diagnosticians I have ever met.  She loves reading about medical issues.  She trained at Kellogg Business School to administer major hospitals.  I think the only reason she is not a doctor now is the fact that she loves sleep too much to do a residency.

She now enjoys running the Health Center at camp (the “Ill Eagle’s Nest”) and strives to keep our campers healthy.

No campers more than the four on this trip.

She has come on this trip with 3 3-gallon ziplock bags full of medications for every possible contingency.  We are ready for malaria, dysentery, strep throat, asthma, diarrhea and all other miscellaneous ailments.  I suspect that she is ready for scurvy and trenchfoot too.

But to be a diagnostician, you need information.  This has made my beautiful wife into that person that asks question about bowel moments. Not just a single question, but questions with follow up questions.  Presidential debates often have less follow-up.

Yet, we survived the first 5 weeks with nothing more than nasal drainage and a little soreness.

[Note: I never imagine that my blog would drift to the scatological as much as it has in Asia.  It did not seem to do so in Europe.  Yet my goal has been to bring you into our world.  Hygiene, bathrooms and health are all hard to ignore when in this part of the world.  In Europe, our kids were staring at

I consider this a great triumph of Dr Susie.

Now we head to Southeast Asia, with the risk of Malaria.  Worry not, we have mosquito nets, repellant in our clothes and daily malaria pills.  She is ready for the next medical challenge.