Today is Susie’s birthday.  She is now a lovely ?!#*@#%! years old, but looks a decade younger.  So, what does our lovely matron get for her birthday?  A domestic flight on a Thai airline.  Yippee!  What better way to celebrate.

If the flight was not enough, she also has to suffer the loss of the beach.  It is actually cruel if you think about it.  Our adamant lover of the surf and hater of flying must board a plane and leave the shore behind.

I am doing better than she.  All that comfort and ease was bad for me.

Time to return to culture, air pollution, crowds, language gaps and poor housing.   Our time at the beaches of southern Thailand is behind us.

The past week was odd.  It did not fully strike me until the second day at Karon Beach as we were walking with the kids up and down the beach.  We were enjoying the people watching and catching crabs.

It was then it struck me.  Other than the people selling drinks and souvenirs, no one on this beach was Asian.  No one.  I am guessing that we saw 400-500 people.  We were in Thailand.  Yet we might as well have been in Serbia or Southern France.  Everyone looked European.

I can understand that the Thai might not want to come to southern Thailand, but I had expected to see people from China or India.  Nada.

We heard Scandinavian languages, Spanish, German, English, French, and Russian.  Lots of Russian.  In fact, many of the menus were written in Thai, English and Russian.  Magazines and books at our hotel were Russian.  The fool who joined in the break-dancing competition during the “Show” was Russian.

Clearly, the upper class of Russia vacations in Thailand.  I guess this makes sense.  Russia is a huge country with not that many warm ports.  In fact, their invasion of Afghanistan in the late 1970s was largely an effort to get access to a warm-water port.   Since our country is awash in ocean access, we tend to take ports for granted.  I find it rather amazing that a country as large as the Soviet Union had so few options for year-round shipping.

Most of the Russians that we saw were on the young side and seemed to be longing for the maturity and sobriety of the average US university fraternity.  They did not seem the slightest bothered by the “Show”.  On the contrary, their break-dancer came armed with a wide array of vulgar hand signals and expressions.

I am looking forward to going native again.  Do not get me wrong.  I enjoy vacations.  The beach is a blast.  But I have fallen in love with meeting ‘real’ people and learning about their lives.  When we do run into Westerners, I prefer the stalwart denizens of hostels to the luxury guests at the hotels.  I am not saying that they are better people at the hostels, but the hostels form communities of travellers.  Hotels create individual cells of vacationers that rarely interact with other cells.

Part of this comes from the fact that hostels do not have particularly nice rooms.  They have either no TV, or just TV in a foreign tongue.  The Internet is only available in the lobbies.  As a result, everyone gathers at the end of the day to check email, buy a drink and swap stories.  I like that camaraderie.  It is a first cousin to the connections that happen in cabins at camp.

Also, resorts are destinations.  Hostels are way-stations that are part of other journeys.  Everyone at our Xi’an was coming from or going to some other interesting place – perhaps Beijing, Shanghai or Tibet.  Since we are often about to go to the very place they have just left, it provides a ready source of good conversation.

Finally, our kids are anomalies at the hostels.  Most people staying there are traveling alone or with one companion.  A family of six is an intriguing rarity.  The staff tends to take extra care to assure our amusement and comfort.  It also helps that the kids have managed to be pleasant travellers and not petulant teens.

Our next stop is Bangkok itself.  We will be in the sprawl for 5 nights.  We are only now working on our agenda.  Our ability to plan is essentially shot.  Other than flight  and hotel reservations, we are improvising daily.  Happily, we have become good at this.  Susie managed to book a great place for us.

I want to conclude with a few quick notes from the rest of the day.

First, we decided to have a nice sushi meal for Susie’s birthday feast.  It was a surprisingly good restaurant.  The sashimi was excellent and creatively prepared. Most amusingly, however, was the fact that the wasabi was extremely fresh and potent.  At one point, Wiley challenged Terrill to try a small dab.  She ate it, looked bored for just over one second and then her face contorted wildly.  I suspect that a better father might not have laugh.  I roared.   I missed the best expression, but here she is 10 seconds later. 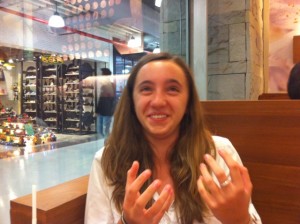 As we left the meal area, we saw some bathroom signs that made us smile.

We also saw a large gorilla made out of paper.

Nothing says “Thai Christmas” quite like a large paper gorilla.