You see, we went to a hospital and the post office.  One of the experiences was incredibly difficult.

Let’s start with the hospital.  Before last summer, Susie noticed that Wiley had a lymph node that was larger than the rest of his.  She had him visit a doctor and got a clean bill of health.  Several days ago, she noticed that it was still there.  One of the great things about Susie is her deep understanding of medical issues.  It makes her a great mom and a fantastic head of our camp health center (the Ill Eagle’s Nest).  The downside is that she knows the most concerning diagnosis for every symptom.

She did not like the fact that the lymph node was unchanged in 6 months.  She also knows that Thailand is a famed “medical vacation” site.  A “medical vacation “ is when people travel to another country for medical procedures that are less expensive than in the USA.  Bangkok is a big destination for this practice.

Susie decided to make an appointment for Wiley.  I had mixed feelings.  My gut told me that the reasons that the doctor was not worried before (the node was not hard and it was not too large) had not changed.  But I am also aware of Susie’s superior medical knowledge.  Finally, I hate to have her worry.  Today was the day for our appointment.

Part of me was concerned that Wiley might be sick.  Another part of me worried that they would “upsell” us into a battery of unnecessary (and painful) tests.

We took a cab the hospital first thing this morning.  [Note: cabs are cheaper than the subway by a mile.  A 30 minute drive cost us just $3.  Subway travel for three would run $4.  I have never seen a place where cabs are cheaper.  I cannot even speculate why this would be true.]

Outside, we saw this shrine.  I suspect it is the equivalent to chapels in church, but more actively used.

We arrived, signed in, waited 20-30 minutes and met the doctor, Dr Pornthet.  He was delightful: professional, thorough and reassuring.  He was not at all worried about the lymph node.  He checked all of Wiley’s nodes for 5-8 minutes, listened to the history and prescribed two meds to help with the acne that he believes is the source of the swelling.

I do not like to write about the cost of things, but let me share this odd comparison.  We saw a pediatrician, two nurses, and received 2 prescriptions for a total of $61.  In Europe, we had to pay $57 to cross the bridge between Sweden and Denmark.  $61 would not get a quorum of us into Westminster Abbey.  Heck, it was $15 less than the Thanksgiving Turtle.  The facility was first rate: accredited by the Joint Commission for hospital accreditation (I am sure that our Prague locale was nowhere close) and they provide translators for 140 different languages.  I found this simply amazing.

It was like a 2 ton weight lifted off of Susie.

She was so happy, that she decided to do the only logical thing - attack an additional challenge.

We have been carrying Regina for almost 2 weeks. If you do not remember Regina, she is our 18 pound carved wooden horse.  He she is being fashionable: 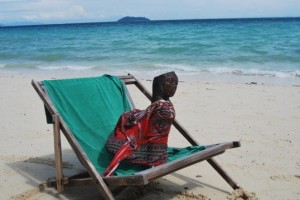 After a bit of research, we learned that the Thai Postal Service is the most reasonable method of shipment.  Once we decided that we were going to ship, we acquired a few additional for gifts and camp decor to join her on the trip.  We also pulled all of the cold weather gear we had used in Nepal.  We were surprised to realize the extent of our pile.  It was mountainous.  We gathered everything into several backpacks and then headed to the post office in two cabs.

We had not considered the possibility that the Christmas season had depleted their supply of large boxes.  Picture a family of 6 with 5 bags of stuff, a wooden horse and no clue.  They are the only westerners in the post office. The youngest is dressing up the wooden horse.  They are pointing to boxes with and waving their hands as if to say “bigger”. It became clear to me that we were the most authentic form of amusement that many of these workers has seen in weeks.

But the show was just getting started.   A nice manager told us about a place that would sell us boxes and perhaps pack them for us.  He have us directions.  Liam and I headed out.

His directions failed us.  We walked for 20 minutes and came up empty.  Liam, to his credit, is not scared to asked strangers questions, so he was interviewing anyone that we could.  Ultimately, we ended up at a Goodyear tire dealership and acquired two boxes.  They were new and solid.

And 2 inches too short for Regina.

While we were gone, the rest of the team started a fashion show with Regina.

The nice manager, seeing our incompetence and feeling the sort of pity that is usually reserved for the seriously impaired, offered to walk me (with Regina) to the box store.  It look more like an electronics repair shop than a packaging venue, but the sweet woman who owned it soon appeared the perfect box.  She, however, had zero interest in packing the box with the fragile wooden sculpture. 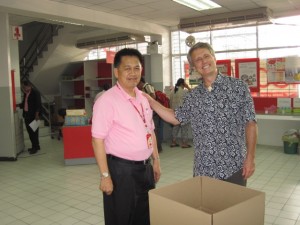 I took the box and Regina back to the post office.  Now the show really started.  We begged for some packing tape and we got busy.  We braced her legs apart using long underwear and then taped the legs together - thus limiting their movement.  We tossed in items. 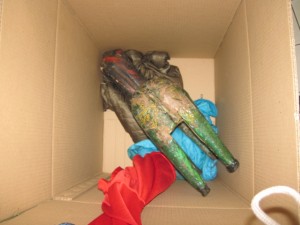 Have you ever been to the circus and seen the clowns exiting the small car?  You marvel as more and more and more of them appear from the vehicle.  That is what the Thai postal workers saw.  We kept producing more items to stuff into the box - puffy jackets, gloves, elephant pillows, sunglasses wrapped in socks, rice paper lamps, sandals, a rain jacket, hats, door handles, Thai boxing shorts, bracelets, sweaters, walkie-talkies, and more.  We realized that each of the two bozes we had would be just slightly under-packed.  Terrill suggested that we take some used boxes and cut them up to fill the empty space.

You might think this an amusing spectacle, but we were able to raise our game.  While packing, it became obvious that we would not need one to the 2 boxes we acquired from Goodyear.  This might seem like an uninteresting fact.  If so, that would mean your name is not Virginia.  She saw an opportunity to create a box robot.

You might speculate the value of a box robot during a packing challenge.

She, however, provided enough amusement to one of the workers that he literally had to sit down.

The big kids were getting bored and fighting a tad - pushing, talking too loud and even wrestling.

While watching this man laugh, Susie noticed that the post office sold pink shirts with the Royal crest embroidered on them (the official post office uniform).  The material is actually the high quality Dri-Fit clothe used by Nike or Adidas.  While we were still stuffing the boxes, Susie asked about the shirt.  They suggested that she try them on to assure the right size.  She tries on the Woman’s large.  It was a tad tight.  The woman helping started to giggle - “you too big, you must wear men’s sizes”.

She found this hilarious.

I found it slightly worrisome.  You see, the kids have been telling Susie earlier that a dress she bought made her look big.  These are words that I avoid like the ebola virus.  In fact, I generally focus on whatever I am reading like it is of life-sustaining importance.

There are a few things I know.  First, I think Susie is beautiful - really beautiful. Second, I know she is not big at all.  Third, I know this is a conversation that must be avoided.  There is no way to safely respond to “what do you think I look like in these?”  To my mind, it is a koan, those enigmatic Zen questions like “Without thinking of good or evil, show me your original face before your mother and father were born.” or “what is the sound of 1 hand clapping” (sorry for repeating this reference from last night).  In short, there is no easy answer.  So, “what do I look like in these” is best answered with “73” or “the rhesus monkey” or “how about that lymph node”.  Under no circumstances should you attempt a straightforward answer.

So we are in the post office with 2 stuffed boxes, a box-robot, two howling postal workers, a radiant woman recently accused of being large, wrestling teens and a confused 47 year-old . . . for 2 hours.

Another day for the Baskins.

In the end, we sent a 10 pound package and a (wait for it) 62 pound package.  We amused an entire post office.  At one point, Susie suggested that they might be getting tired of us.

Terrill responded wisely, “mommy, they work in a post office.  This is the most fun they will ever have here.”

We are here to serve.

I hope you found some amusement in this as well.