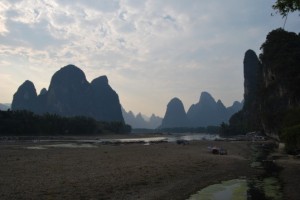 We are flying Dragonair to Kathmandu.  Our adventure in China has come to a close.

It seems like a great time to summarize my thoughts on this fascinating country.  I have spent a fair amount of time thinking about what to say about China.  I know I cannot find a unifying theme.  Instead, our 24 days here have been a collage of images, thoughts, smells, tastes, sounds and toilet options.

This blog is my effort to share this collage.

Mao must be flipping in his grave.  China is a Communist country just as surely as I am a kitten.

Here is the evidence.

China embraces entrepreneurship and wealth like few places I have ever seen.  We saw improvised stores, vendors in parks, street guides, knock-off markets and Chinese QVC.  You can buy anything and everything, from huge pearls to beautiful ethnic robes to works of art to Gucci bags.  It is for sale for the person willing to haggle and spend.

Every town is festooned with billboards touting Western brands.  Status is a mobile phone.  Marc Jacobs and Sephora and Estee Lauder are everywhere.  In fact, so is Playboy, though we saw no evidence that they know what that brand signifies.

We saw people lining up to worship at the god of wealth.  We saw idols with coins in their mouths and no tail end (so that the money cannot go out).  We watch Good Morning Asia with a 30 minute segment on investment with two men talking earnestly with glasses of unconsumed wine in front of them.=

Mao remains an icon, but his views no longer hold sway.  Sure, you can buy his Little Red Book almost anywhere, but it is usually next to the chopsticks, throwing stars and samurai swords.

Here is my favorite tidbit on communism: apparently young people are joining the Communist Party . . . for the political and networking connections.  Apparently, becoming a Communist is a great business move for a free market fanatic.

This is a tricky one.  Roughly 70% of the Chinese list themselves as atheist.  Communism is atheist by definition.  The Russians were adamant to stomp out religion, destroying sites and banning religious gatherings.  China seemed lukewarm in its abolition.  The Muslim Quarter and its Mosque never missed a beat.  Buddhist and Daoist shrines continued unfettered.  Christianity was discouraged, but not wiped out.

Now, Shanghai gears up for Christmas.  Hong Kong seems to celebrate the season with every opportunity.  Sure, their enthusiasm is clearly driven by the commerce aspects of the season. The moment Thanksgiving ended, the Christmas trees were up and every variety of Christmas decoration available.    Yet there is an odd difference.  The omnipresent Christmas carols are piped from every speaker, but there is a mild difference to American stores – the carols include the religious ones.  Silent Night, Oh Come All Ye Faithful and Away in a Manger are the choices, not Frosty the Snowman, Santa Claus is Coming to Town or (dare I even name it?) Jingle Bell Rock.  I find this interesting.  I understand the fact that US stores are committed to religious inclusion so that they only play secular music.  But why would China embrace the religious songs?  I really do not know.  But it is so odd for a nation that officially repudiates religion.

I will admit that Hong Kong is different from the rest of China, but I saw similar trends in the mainland.

In 1997, England turned Hong Kong over to China.  The deal was consummated a decade earlier when China was only dabbling with liberalizing its economy. Many people worried that the economic status and vigor that the city-state had developed would be destroyed after its reacquisition.

It seems the opposite happened.

First, the Chinese made several critical decisions.  Hong Kong would have separate laws and government.  It would not adopt the Yuan, but maintain the Hong Kong dollar.  Private companies would remain private.

These policies were not out of kindness, but instead out of a desire for “hard” currency – currencies like the dollar that trade freely and have international value.  In the 1980’s, the Yuan was without international value.  It might be undervalued now, but at least it can be exchanged.  In the 80’s, China needed hard currency if it wanted to buy anything that it did not manufacture itself.

Hong Kong became China’s ATM.  They decided that they liked it.  They then decided to make Shanghai the next Hong Kong.  Deng Xipeng (sp) committed the country to a plan to make the economy freer without providing other freedoms at the same time.

The appetite for dollars remained strong.  In fact, I suspect that the policies that have resulted in China holding over $3 trillion is a result of this hunger for US currency.

This is a hard phenomenon to comment on.  Many commentators seem to believe that the internet and economic freedom would result inexorably in a deep hunger for great personal freedom.  The protests at Tiannaman Square seem to suggest this.

Yet I am not so sure.  I think that eventually China will need to liberalize politically, but I also think that the Chinese crave monetary success much more than political freedom.  This balance is different from what we see in the West.  They will be willing to trade freedom for success much longer than we ever would.

As I have documented, Susie is a star for bearing 80% of a basketball team.  Since China adopted the One Family, One Child policy, large families are simply a marvel. Our large size made us celebrities. Whenever we found ourselves being photographed, we chose to embrace the opportunity to meet new people.  In every city, we engendered smiles and laughs.

I, however, did find the sexism of many of our new friends somewhat annoying.  On several occasions, we had people look at our 2 boys and 2 girls and then say to Susie, “Two boys, you so lucky!”

The older Chinese cling to their ways.  They practice their Tai Chi daily.  They still spit enthusiastically.  They seem to be wearing the same outfit today that they wore years ago, but they each seem to adhere to a different look.  Some still wear their Mao shirts.  Others are wearing suits (even on amusement park flume rides).  Perhaps my favorite is the pajamas.  Some Chinese women wear PJs everywhere – Hello Kitty, pandas, whatever.  You can see the younger generation rolling their eyes, but the PJ crew cares not.

This underscores the massive generation gap.  The younger generation talks on their mobile phones while the older set talks while playing cards.  The kids wear Abercrombie and Fitch as they pass veterans in Mao shirts.   One group eats chicken feet as the kids eat KFC.

The Chinese are comfortable being close – really close.   In subways, in queues, in noodle shops, on the street.  They like it close.  We had a trouble modifying our territorial bubbles.  Ultimately, we did OK, but the Sleeper Bus was too much for us.  We just were not ready for a return to the womb.

We hear a lot about the rigor of Chinese education, but I saw a huge emphasis on uniformity.  To start, every student wears a uniform.

At 8AM every morning, all students in China line up in the same way and perform the same exercise routine to the same recording.

I suspect that this might be one of the reasons they have less civil disobedience.  Duty and respect and conformity have long been hallmarks of Chinese culture.  It is not just a part of the totalitarian regime, it goes back to Confucius.

As a result, you have a people that can accomplish amazing things once they put their collective minds to it (the Great Wall, massive economic growth, leadership in green energy equipment), but it is not well-suited to develop innovative or revolutionary ideas.

You are never really prepared to see a 2 year old walk to a bush, squat and (how should I put this) do their business.  And business is good.  The little ones do not have diapers, just pants with slits from the front to the lowest point of the pants to the back of the back waistline.

As adults, the facilities remain oddly foreign.  I have documented the squatters/holes in the ground.  Some of the facilities in the rural areas were simply shocking.  One of our favorite observations is that most of the squatters were built by American Standard.  I just love this.

Ultimately, China has made a huge impact on us, but we are not sure what the impact is.  We loved the people, but I am not sure we understand them.  We have seen beauty that is unmatched next to public incineration pits, squalor and trash.

We have seen communism that is not communism.

We saw a spiritual people in a country with record levels of atheism.

We saw that population control measures transform the way people see the world.

We loved our time here, but it is time to go to Nepal!