My grandfather was a newspaper man and a great collector of stories.  I wish I could have a week with him now that I so deeply appreciate great story-telling.

I, however, do remember one of his favorites.

A woman agreed to take her young granddaughter to Astroworld in Houston in the early 1970s.  They arrive and spend a full day at the park.  At the end of the day, they go to the parking lot to head home.

It is then that she realizes that she has no idea where she parked.

After half an hour of searching, she solicits the aid of a park employee.

“What type of car did you come in?”

“I do not know anything about cars.  My husband bought the car.”

“Can you tell me the manufacturer?”

“I think it is light-colored.”

“Can you think of any distinguishing detail at all?”

“It has four doors.”

They then drive around the parking lot in a golf cart for 15-20 minutes.  The crowd has thinned out, so it is easier to to see the cars.  After their long search, the grandmother spots a familiar vehicle.

She pointed at the car.

It was an Edsel with a canoe tied on top.

I share this story for two reasons.  First, I think it is really amusing. It is a story that I told our kids last week. They begged me to show them a picture of an Edsel, but I never had an internet connection when they were asking.  Of course, I inevitably forget later when we are on the web, so I have failed to show them one of America’s great automotive flops.

Second, we visited the Laotian Royal Museum today.  The Communists took over Laos in 1975, but they left the Royal Palace as a museum.  After touring the grounds, seeing the rooms, appreciating the items, we walked outside and noticed the “Royal Garage” and the display of Royal Cars.

We saw pictures of the Royal Drivers (one of which had only one eye  . . . really?!??!) and four cars.  The oldest was a Citroen form France (from the late 1040’s).  Two  were Lincoln Continentals that were gifts from the US government in the 1960s.  Yet one car stood in the middle.  Here she is.

We were all thrilled.

In fact, seeing the Edsel made me understand the two free Lincolns.  From the descriptions, it seems the royal family bought the Edsel on their own, but got the Continentals as gifts.  I suspect that some US diplomats saw the Edsel and decided that it reflected poorly on the U S of A.

“Mr President.  We need to send a decent ride to the king and queen of Laos.”

“Mr President.  They are driving an Edsel.  People in the Mekong delta are beginning to think this is the best we can do.”

We saw a lovely array of temples and monks.  We went to the Night Market and appreciated the wares.  We also enjoyed some street food.

I am so sad to report that I am having real internet struggles at the moment.  We have an array of shots that are fun and artsy.  But you must be happy with one shot and an Edsel joke.

Wait, I seem to have a brief spat of connectivity.  Here are a few to leave you with.

We visited several “Wats” (temple complexes and monastaries). They were beautiful, but also amusing! 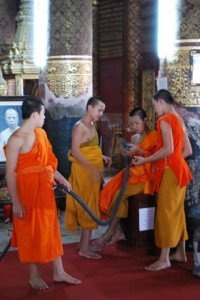 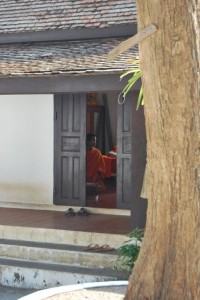