[Disclaimer:  After two fluffy blogs, I feel a need for some thoughtfulness.  Most of my blogs are meant to share the adventures and experiences of Team Baskin on our travels.  Occasionally, I will pursue a philosophical tangent, but I generally stay with travel reporting.  This blog is one long philosophical tangent.]

I have been struggling a great deal lately with the balance of culture and progress, tradition and technology.

On one hand, we have the people we saw on our Nepal trek.  They all wore traditional outfits, prayed at small local shrines, worked in the fields and carried loads on their backs and heads.  Their lives were the same as their parents and grandparents. 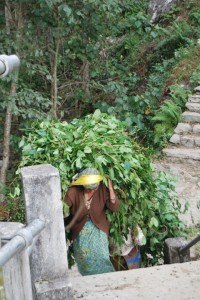 On the other hand, we have Hong Kong or Shanghai residents.  They speed to jobs that did not even exist a decade ago on subways built in our lifetimes.  They wear modern clothes festooned with luxury brands.  They do not seem to visit any shrine, unless you count the iPhone clutched tightly in hand as they text. 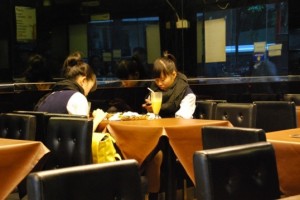 The former group is poor.  They have little education and almost no chance of advancement.  They die younger.   Women are underappreciated.

Yet they almost never suffer from depression or eating disorders.  They are generally more content than their urban counterparts.  They live in the moment while the urbanites scuttle from experience to experience attempting to find satisfaction.

For example, we know that the world did not come forth out of a Lotus growing out of Vishnu’s navel. We know about grand cosmic explosions and tectonic plates.  We know that the Earth is not the center of the universe and that we are one of “billions and billions” of stars (did anyone else hear Carl Sagan’s voice just then?).

Where does that put us?

Joseph Campbell, the great expert on religion and myths, once said that the modern man is with Prometheus on the weekdays, Job on Sunday and the psychiatrist’s couch on Monday.  By this, he means that we struggle aligning our religious beliefs with the evidence of science.

Some of us simply choose to ignore science and assert the inerrancy of specific texts.  These individuals hold that the world is less than 10,000 years old or that the Earth remains the center of everything.

Most of us find this unsatisfying.  We understand that we are on a sphere orbiting a sun in one of many galaxies.  Since no religious text asserts this, it is easy to throw faith and spirituality out the window.  I worry that doing so is a mistake.

The great faiths might be poor at cosmology, but they are extremely valuable in giving us context to our lives.  We understand that we are part of our communities. 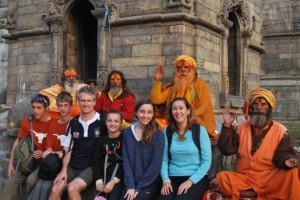 Having worked on Wall Street and at camp; having traveled the world and seen all manner of people; having worked with adults and children, I share the following observation:

We are most content when we are part of something bigger than ourselves.  It might be a cause or a community, but it is not our own ego.

Some people wonder why so many celebrities are miserable.  Why does Lindsey Lohan spin out of control? What demons haunted Michael Jackson?  Why did Owen Wilson attempt suicide?  They are beautiful and wealthy.  In a world focused on material accumulation, they are winners.

Similarly, I did not see much happiness or contentment in the world of Hedge Funds and investment banks.  I am not saying I have not met anyone who is happy, but I have met far more who are not.

The typical Tibetan porter seems happier with his lot than the multi-millionaires I know.

I suspect that nothing I write is a shock to anyone.  We know we live in the richest society with the longest lifespans that history has ever seen.  We also have more documented depression than ever before.  Certainly some of this is the fact that people were not aware of depression as a state of mind in the past, but we still experience more than our ancestors.

To my mind, this is the great challenge of our lives – wedding the advancements of technology with context and meaning.  We need to find causes and communities to serve.

This summer will be my 20th as a summer camp director (Susie’s 19th).  Over this time, I have come to the conclusion that one of camp’s greatest gifts is that of community.  At its best, a camp is a gathering of individuals who love each other and work together to improve each other.  Within the greater community (camp), there are smaller communities (cabins).  Great counselors love and serve their campers.  Campers are then free to love and serve each other. 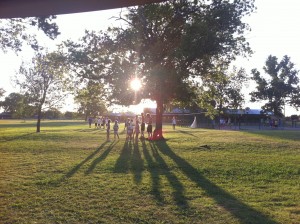 I believe that once you experience the power of community, you know that sense of belonging is possible and you will strive to find it elsewhere in your life.  I believe campers and counselors eventually make better members of college campuses and congregations; they will be better parents and co-workers.

Ultimately, I believed we are wired to connect with community.  The culture of consumption appeals to our adolescent personalities, but many of us never grow to appreciate connection and community.  It is my hope that the camp community creates an appetite for connection.  I know it does for me. 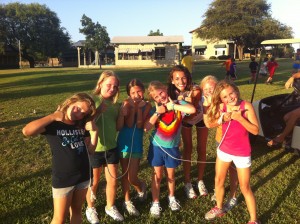