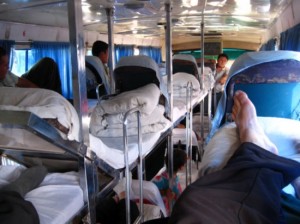 I am on a sleeper bus from Yangshuo toward Hong Kong. You might think I mistyped that - surely I meant a sleeper train. Nope, it is as I said -a sleeper BUS.  Picture three rows of bunk beds: one on either side and one down the middle. Each row has 7 bunks for a total of 42. Even when 7-11 hosted 27 girls, it was roomy in comparison. We were the last passengers to get on.

We have committed about 3 faux pas in less than 4 minutes.  First, we entered leaving my shoes on (you take them off and put them in a plastic bag), we entered rather loudly (as there were people already sleeping at 11PM) and I put my belongings in an occupied bed.  Please do not think that I tried to jump into a bed with another passenger.  No, I went to a bed that was empty, though the bedding had been messed up.  Since I could not see the one available bed with bedding properly folded (it was on the row I could not see), I went to the first one that did not have 1) another Baskin or 2) a Chinese person.

I put down my stuff and padlocked my computer bag to the foot of the bed before the husband of the woman who had gone to the bathroom said anything. “No!” He said, with no language skills beyond that.  His wife then appeared and looked non-plussed that a stranger was about to jump into her berth.

Note that she was missing because there is no bathroom on the bus.  This was also a concern for the sleeper bus.

Why did we take it? It saved us about 8 hours of travel time.  I think it is a good decision.

As I lie in my own bunk, I wonder a bit.

When I came to China in 1986, I was excited to feel tall.  As a rule, the Chinese are more diminutive than Americans.  I was the tallest in my family, but that is not quite an exacting standard.  At 5’9”, I was the big Baskin.  In high school and college, I have always been exceptionally average.  But not in China.  Suddenly, I felt like a power forward.

I told the boys that they would enjoy the same experience.  Since Liam is essentially the same height I am (I will absolutely not bore you with the number of conversations he has initiated claiming that he is taller . . . let it suffice to say that he is not, but might be by the time we return to the states) and Wiley is an inch shorter, they would also feel tall in China.

I share this for one simple reason.  While it might be a boost to the ego to be taller in the streets, it is highly disadvantageous when you are in a sleeper bus.

Now I do not know whether any of my following theories are true, but let me share it nonetheless.  Having now occupied a sleeper bus, I can say that one, if not all, of the following are valid:

That is what I have as an explanation.  As you now know, the berths were, shall we say, on the tight side.  Virginia could touch both ends if she extended her toes.    If I were to extend my toes, they would have punched through a partition and rested on the chest of a now uncomfortable Chinese traveller.  I am guessing that the berth was 28-30 inches wide and 5”3-5” long.

This is where I should show a picture.  I do not have one.  The one at the start of this article is from the Internet.  My failure to produce one of us requires and explanation which is forthcoming.

In order to get to the bus, our travel guide had arranged a pick-up at 10:40 from our hotel. We sat in the lobby and waited for our chariot to arrive.  Our “chariot” came in the form of an open air taxi. It was essentially a large gas-powered golf cart. The ride was only 5 minutes, but with the 40 degree weather and the breeze, it was a chilly start.  In retrospect, it was kinda luxurious compared to the bus.

Oh, and I now own a baker’s dozen urinating idols.

Urinating. Idols. Remember the tiger statue that I bought that did not work?  The one our tour guide assured me he would replace? Apparently, urinating idols are the aforementioned replacement.  I, myself, rarely confused large striped feline predators with whizzing waifs, but I guess I lack vision. Now, rather than have a symbol near to my heart that is tied to a central Camp Champions legend (the mighty Tiger), I now have a bag full of characters that look like the Calvin and Hobbs boy jumped off a Ford F150’s anti-Chevy decal.

Just to help you understand what I am talking about.  This is a 2 inch statue that you must first soak for 2-4 hours in water and then pour hot water on it.  The heating makes the cold water expand and the idol, well, pees.

I am hard-pressed to articulate my feelings about this confusion. Am I disappointed?  Sure. But there is more to this emotional mélange. I sense a tablespoon of bafflement, a dash of amusement and a pinch of frustration.

But there is another taste.  Yes, it is a hint of possibility.  Sure, the idols are crass, but they might prove to be a source of great excitement to the Senior Campers or even a group of Rookies.  OK, it is not sophisticated humor, but who said that is the only kind?  I know it will create great giggles, but I worry that it is a little too base.  Any thoughts from you readers?

Finally, here is why you have not picture of the Baskin on the bus.

Clearly, we could not take a picture when we arrived.  People were sleeping and we did not want to wake them.  Instead, we planned to take one as we left the bus.

Why we assumed that our stop was the terminus, I do not exactly know.  We were going south toward the city closest to Hong Kong (Shenzhen).  Hong Kong is as far south as you can go.   I guess it never occurred to me the bus would head to the east after Shenzhen.  We were scheduled to arrive at 8AM.  At 7:15, Wiley wakes me,

“Steve Sir [oddly, he still uses my camp moniker], I think this is our stop.”

To be honest, I discounted this for three reasons.  First, most people were staying on.  Second, we were 45 minutes early.  Third, Wiley is not the logistics guy.  More accurately, he is more of an anti-logistics guy.  He does not worry about deadlines or timetables or directions or anything else.  I think his basic assumption is that someone else will be more worried about it than he is, so he can enjoy the moment.

This has been a great assumption for our travels.

I want to be clear that I am not critical of Wiley in this regard.  In fact, I am quite jealous.  The only problem is that his strategy requires people like Susie and me to make it work.  I would switch places with him, but I doubt he would agree.

Back to Wiley’s warning.

To have Wiley ring the bell of anxiety did not make sense.  In fact, I initially thought that I was having an odd dream.

After assuring him that he was wrong, I decided to double check.  I spotted a petite Chinese woman (bet that berth fit her perfectly) and asked, “Is this the end of the line?”

Through my cloud of sleep, the seriousness of Wiley’s appeal came forth, knocked on the door and asked for a cup of tea.  I asked a follow-up question.

At that moment, the bus started to pull out of the station.

I am not exactly sure what in my voice convinced the bus driver to stop.  The Chinese like their timetables.  He did not want to stop; yet he did.

I also have no idea how long it took us to wake the other 4 people, unlock the valuables, gather our stuff, leave the bus and retrieve our luggage.  I honestly think it was less than 4 minutes.  That does not seem like a lot of time, but challenge you to simulate it in the comfort of your own home.  [Note: if you actually do this experiment, you have too much time on your hands.]

We were a blaze.

We got off, got breakfast, cleared customs, made 4 train transfers and arrived in our hostel.

We were a long way from the golf cart pick-up, but the journey was complete.