There are some things that you cannot unsee.  You might wish that you could forget them, but they remain seared in your brain.

Today, such a vision happened.

But I should start with the positive.

Today, we booked a full-day excursion.  We would visit 4 or 5 islands, kayak, swim and enjoy a beach.  Susie did a great job of negotiating a ridiculously great price and we were so excited.

I should start by saying that the area around Phuket is transcendently beautiful.  Mountains shoot vertically from the sea in a way that is unforgettable.  IF you have been reading the blog, these mountains are similar to the karst formations that line the Li River.  Few scenes are as stunning. 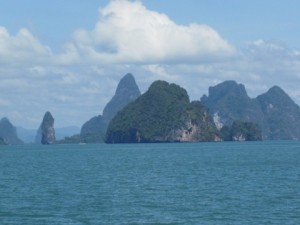 This trip would take us to the best of the best locations.

We would start by visiting a cave with bats on the inside and the monkeys on the outside. 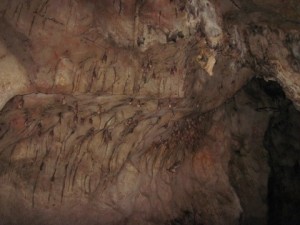 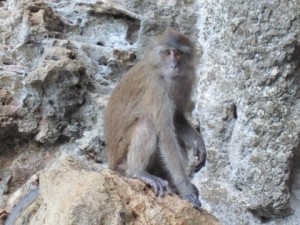 Some of our hosts paddled us through the area, but the boys went on their own. 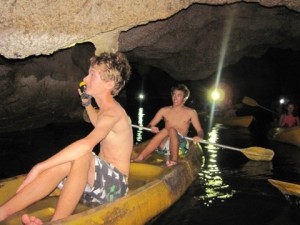 We then went to an island that translates to “rooms”.  As we kayaked, we went through all the “rooms” – three separate lagoons reachable only by kayak.  I particularly liked getting to do the paddling (and the splashing of children) on our own. 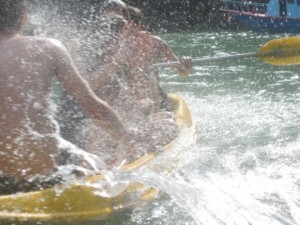 We then went to “James Bond Island”, a magnificent site featured in the “Man With a Golden Gun”. 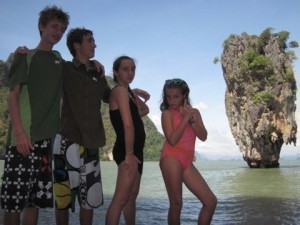 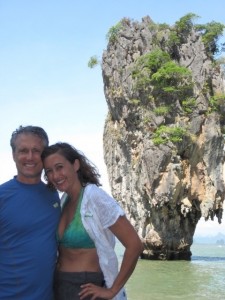 Our final location would be a beach where we could swim, hang out with monkeys and kayak around. 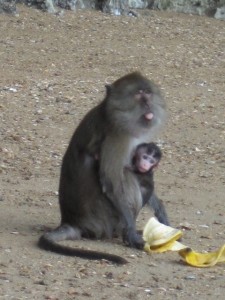 We spent the day with a fantastic family from Portland, Oregon.  They have two daughters: one in college and one in high school.  Our kids loved having other young people to hang out with.  I wanted to point out that Susie and I are quite young, but I suspect our protestations would fall on deaf ears.

It was a lovely day.  We loved the company, the sites, the beaches, the weather.

All that we needed to complete the perfect day was a relaxed one hour return boat ride with fun conversation with our new friends.  Floating between the islands was serene and relaxing.

While we were talking with our new friends, the music volume suddenly rose to a high level.  We paused, raised our voices and then continued chatting.  The volume then increased again.  I believe the volume was set to “permanent hearing loss”.  Our new friends frowned and signaled to the crew to drop the volume.

Susie then walked to the PA system and asked to have it turned down.  I watched the exchange.  Her body language was pleasant and non-threatening.  She had her thumb and forefinger about half an inch apart to signify “turn it down just a little”.

The DJ looked at Susie with an odd expression. I would describe it as “desirous of her death”.  In short, he was not happy at all.

Susie returned to us to report that they were not happy.  They said something about a “Show” and that “we need to have fun too!”

Moments later, the music went silent.  Susie returned.  She did not know why they music stopped, but she was excited to hear more about our new friends and their daughter’s studies in Nepal.

Several minutes later, the main host began to talk on the PA.  I could not make it out at first.  He sounded hurt.  He began to explain the source of his pain.

“We were about to do Our Show, but a Woman told us to turn off the music.  We want to give you show, but we cannot”.  In your mind’s ear, you should hear an oblique accent coupled with a deep whine.

“But do you all want to see the show?”

I guess enough people clapped to justify what happened next.

Realize that this boat has children on it.  Retirees are with us as well.  I suspect someone might have a weak heart.  I do not think they cared.

The music cranked up suddenly.  A hip-hop song blasted from the speaker.  In the first 10 seconds, 4 major expletives burst forth.

Have you ever visited a family member with young children?  If so, you might have experienced the following:

You come together for a nice chat when suddenly the 4 year-old son and 6 year-old daughter declare that they will treat you to a performance.  They then turn on a jam-box, lip-sync lamely and dance indulgently. They will put on silly costumes and odd wigs.  It is kinda cute at first, but it shows little sign of ending.  You realize that they are having fun and have little interest in ceding the floor.

Today was like that, but more indulgent.  Yes, MORE indulgent.

The boaters then got on the microphone and promised dancing, costumes, music and “special surprises”.  They then spewed forth.  They came forth and tried breakdancing.  They did so with little talent, but many obscene gestures.  They lip-synced, poorly.  Not just one song, but two. Long songs.  Painfully long songs.  He thought he was Mick Jagger. 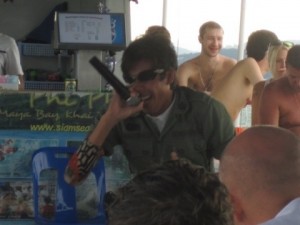 It was excruciating.   I am not lying when I say that I longed for novocaine-free dental work.  I was not the only person horrified.  Here is Terrill’s impression. 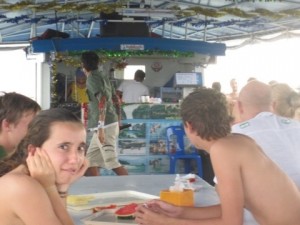 I will not go into much additional detail.  I will say that they got into a break-dancing battle with a Russian, during which they exchanged gestures that would make Eminem blush.  They blindfolded a guest and put ice on his nipples.  They had a large male employee dressed a woman climb on top of another guest.  He even grabbed me from behind and hugged me.  I worry this act might have invalidated my marriage.

It was beyond painful.  Terrill looked at me.  Tense as a spring, she said “this is so painful!  If I do not make eye contact, they will not involve me, right?”

Earlier today, I was complaining that the recent week has been too easy.  We have had fun and we have relaxed, but it lacked the oddities that make for great blogs.  In retrospect, I was tempting fate.  I feel that I brought this bizarre act into our lives.  On the bright side, Susie managed to get Virginia away from the travesty.  She was saved, but the rest of us were there.