A Smooth Search and an Odd Ride

[NOTE:  TOMORROW, WE WILL START A 5-DAY TREK INTO THE HIMALAYAN FOORHILLS.  ON THIS PORTION OF OUR JOURNEY, WE WILL HAVE NO ACCESS TO INTERNET, SO MY BLOGS WILL TAKE A TEMPORARY HIATUS WHILE WE TREK.  I WILL CONTINUE TO WRITE EACH DAY – OR AT LEAST UNTIL MY COMPUTER LOSES ALL POWER – AND WILL POST THE RAMBLINGS AS SOON AS I HAVE ACCESS TO THE WEB AGAIN.]

ATMs are a bear in Nepal.  Many do not take our cash cards.  Others have huge fees while allowing only modest withdrawals.  All of them seem to have guards posted at them.

This last point strikes me as odd as Nepal seems non-threatening.

In any event, we found ourselves at extremely low levels of Nepalese Rupees even as we left Kathmandu flying into Pahkara in advance of our 5-day trek.  We would need lots of Rupees since we will need to cover our porters, the guide, food and lodging for 5 days in areas without ATMs or electricity.

That is how I ended up on the back of a Vespa without a helmet driven by the teenage daughter of a Tibetan refugee.

As I mentioned before, Susie has a friend that arranges trips in Nepal.  He read our blog and decided that we did not want the “typical comfortable trek” and has set us up with a lovely family that lives in the Tibetan refugee community.  Their neighborhood is actually very nice - it has been here since the late 60’s - but it cannot be confused with the Four Seasons.  Our bathroom is actually an outhouse - let’s call it embracingly rustic. In fact, the place we stayed in last night is looking pretty plush now. But the people are lovely, they brought out a Tibentan type sitar and tried to teach Terrill how to pay (with an English/broken English singalong).

When we got there, they assured us that everything that we could possibly need was walking distance.  Shopping?  Check.  Internet cafe?  You bet.  Restaurants?  Sure.

ATM.  Money machine.  It turns out that “ATM” is not the easiest thing to pantomime.

“Not walk; scooter.  My daughter takes you.”

It was not the safest journey I have taken.  As mentioned above, they only have one helmut.  Also, I have never been on the back of a scooter before.  It is not exceptionally stable - especially if you have made a decision not to embrace a 19 year old woman that you do not know.

While we drove, we saw a bus that I believe was carrying a marital party, literally.  Revelers were dancing on top of the bus as others beat drums and played flutes.  It had a fraternity air about it - lots of fun, excitement mixed with essentially no judgement. 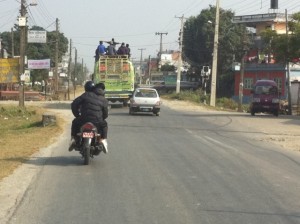 And we almost hit a car that pulled out of nowhere in front of us.  She broke rapidly, but smoothly enough to enable me to remain on the bike. We missed hitting the car by a good 3-4 centimeters.

Susie hates flying.  This is not like “I hate Barry Manilow muzak” emotion.  This is vitriolic, feel-it-in-your-bones discomfort.

One of the things I love about Susie is the fact that she is committed to shield her children from her phobia.  In fact, they are so insulated that they had fun chiding her today as we were flying to Puhkara.

Let me set the scene.  We are coming to an airport that has monkeys on the fences.  In fact, one of Susie’s friends was here when the police had to shoot shotguns in the air to scatter the monkeys enough for takeoff.

We will not be on a 737.  Nope, we will be on an old turbo-prop.  The carrier?  How about Buddha Air - motto “if you do not arrive safely, we will help you achieve enlightenment on the way.”  OK that is not their real motto, but it felt like it should be.

The flight was delayed almost 3 hours due to fog.

This is not the best combination for a reluctant flyer.

Security had separate portals for men and women.  Frankly, I am fairly convinced that the X-ray machine was not working at all since everyone got a pat-down search.  When Susie went through, the woman patted her down and said “nice and smooth”.  I suspect that she meant that Susie had no articles in her pockets, but we have chosen instead to believe that she was appreciating all the exercise that Susie has had on our trip.

The flight was fine, we have connected with our refugee family and we are readying ourselves for an adventure.

Until the next blog, namaste!