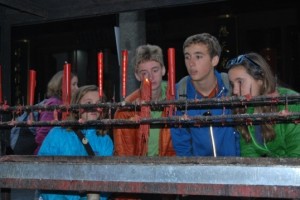 My blog does not have any pictures until after the halfway point, so I wanted to include this odd one with the kids staring at a candle at a Daoist temple.  No, I do not get it either, but I love the fact that it is not a video game.

OK, on to the normal blog.

We in the Baskin Family are true traditionalists.  Just because we are not in the USA does not mean that we will not enjoy the traditional Thanksgiving Turtle.  Give me time to explain.

Today is our last full day in Shanghai and we chose to go to Zhujiajiao, also known as the water village or Venice of China.

The day started very inauspiciously.  In fact,the whole day had its profoundly challenging moments, yet it might be one of my favorite Thanksgivings ever.

Of course, it is worth saying that we miss our family on this family-oriented holiday.  We have spent virtually every Thanksgiving of our lives with either my folks or Susie`s, so this is a little odd.

Nevertheless, this was a memorable day.

We started by packing up a fair amount of souvenirs into 2 boxes to ship home.  Some of the items (like a nice chess set for the boys) are too heavy to schlep around Asia for the next 12 weeks, so we wanted to ease our load.

We headed to a China Post office to do the mailing.  Realizing that this stop would take a while, Liam and I went to the Bank of China ATMs to get some cash.  Almost no one takes credit cards here, so cash is king.  I took both my ATM card and Susie`s.

I took out cash from both and we returned to the China Post Office.  Once there, I handed Susie some cash and the receipts.  She asked about her card, I got mine and then reached for hers.  I reached and searched and frisked and emptied all my pockets and, well, pretty much admitted to being an idiot.

The card was not there.  I must have left it in the machine.

Liam ran back to the bank, but to no avail.  We decided to return to the hostel to call in the card and have a new one sent to us when Terrill insisted that we go to the bank one more time.  There, we found a nice woman that spoke a limited amount of English.  I would say that she spoke just enough so that it, combined with some frantic pantomime, allowed us to communicate the following:

* I left card in ATM

She found a key and returned minutes later with Susie`s card.  I was shocked and thrilled.  It was an ominous start to the day, but we were clearly on our way to an easy Thanksgiving!

We decided to avoid any of the touristy bus trips to Zhujiajiao.  After all, our noodle tour had made us feel truly authentic.  We are not tourists, we are citizens of the world.  We are natives of Shanghai!

We decided to take the bus.   The public bus.

We rode the Metro to People`s Square.  It is worth noting that this park bears the most communist of names yet is surrounded by some of the most modern structures I have ever seen with tons of KFC, Starbucks and Heineken thrown in.

We walked 20 minutes to the bus station (remember, we are natives) and grabbed a bus to Zhujiajiao.  Once on the bus, we realized that we had no idea what the stop looks like.  This is a public bus, not a point-to-point charter.  It stops several times. People get on, others get off.  I have no map or reference.

This starts to feel dicey.  I am feeling a little less cosmopolitan.  Would we miss our stop?  Perhaps we will end up in a small fishing village where we will spend the next few months gutting carp.

Happily, our destination represented the terminus of the bus, so we were saved the pain and confusion of being stuck in some rural backwater with zero chinese skills.

In the station, multiple rick-shaw and taxi people vied for our business.  They kept pointing to our left toward their vehicles.  At least, that is what we thought they were pointing at.

Remember, we are citizens of the world.  The confidence was back.  We would walk to our destination.  Our instincts said “go right.”

We found a map written entirely in Chinese, established our location and chose a route to the city center. 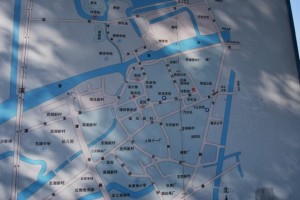 Had the map been written in English and you were to have challenged  us to find the most circuitous route to the city center, we could not have chosen a better route.

Zhujiajiao is listed as the #2 attraction in all of Shnaghai.  It was featured in the Amazing Race.  It is wonderfully picturesque. 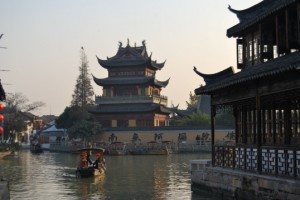 Not on our route.  Well, I guess it was pictureesque if the pictures you are looking for are sunken boats, ill-looking ducks, failed developments and lots of laughing Chinese natives.

Here is what the postcards leave out. 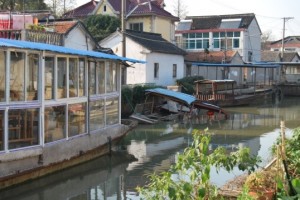 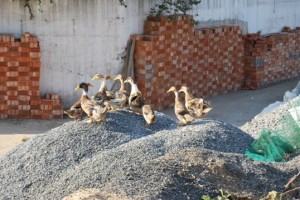 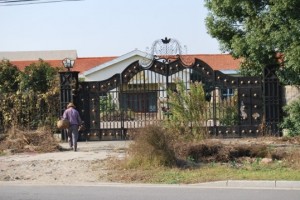 Apparently, there is a difference

It seems that they failed to recognize us as a citizens of the world.  Their expressions seem to suggest that we might not even be adequate citizens of a loony bin.

Oh, but they did get a kick out of us.

In retrospect, the bus station was less than 100 meters from the street leading to the town center.  After 20 minutes of walking, we came upon this sign. 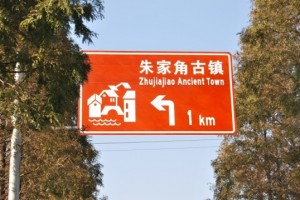 On the bright side, we got perhaps the most authentic street experience of Zhujiajiao you can get.

Once we arrived at the scenic central bridge, we had the kind of appetite that comes with wandering hopelessly through strange streets.

We saw a restaurant right next to the bridge.  It was a hole-in-the-wall, but we adventurers care not.  We were given the one English menu that they had.  Torn and frayed and without prices, this guide enabled us to order. 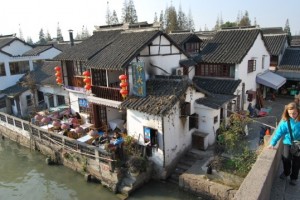 Remember, we are citizens of the world.

We felt a need for the exotic.  The boys lobbied for turtle.  Virginia wanted nothing to do with this, thus increasing the appeal to the boys.  Susie and Terrill were a little unsure about turtle as well.  I did not know what to think. [Note to readers: we knew nothing about eating turtle when we sat down (as evidenced in the rest of this story) but we subsequently learned that our type was farm-raised.]

The plates came and we ate.  Everything was recognizable (especially the eel), except for one dish that seemed to be a deep-fried meat.  We knew that it was either the ribs or the turtle because we could account for everything else.  This became the focus of conversation for the next 10 minutes. The final dish did not look like ribs.  With great pride, we declared  it turtle.  They had forgotten the ribs, we we epicureans do not care.  Even the reluctant Virginia tried it and liked it.

Susie commented that she was glad that the turtle did not look like a sweet turtle.  Wiley wryly suggested that he preferred to recognize his meal (actually, he said that he only feels truly dominant over a creature until his place in the food chain is clearly delineated).

We were getting ready to pay when the waitress arrived again with a look of pride and excitement.  With great aplomb, she presented the final dish to the center of our table.

Remember how thankful Susie was that she did not have to recognize the turtleness of the turtle.  She was thankful no more.

Here is what arrived. 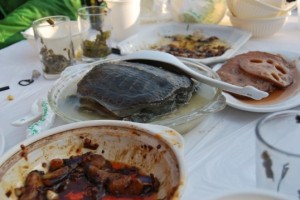 I almost expected it to stroll out of the shallow dish that it came in.  After some discussion, Liam and WIley decided on a plan of attack.  Using the pliers from a Swiss Army knife and their chopsticks, they performed a procedures that more resembled surgery than dining. 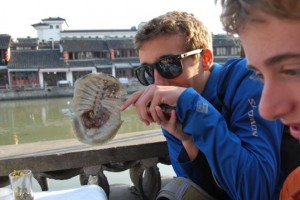 They declared it was delicious.  Depending on the bite they were eating, it tasted like chicken, cod, lobster, crab, basil.  I tried it and it was like a little gelatinous piece of dark chicken meat.  When challenged about the crab comparison, he declared that it tastes like crab if you chew it long enough.”  I have no idea what this means.

$75.   Turtle.  Suddenly, the most expensive entree I have ever ordered - nay, ever seen - was in a rural Chinese restaurant with hygiene standards that might discourage mice.

Liam has taken great pride in being the saver of money.  In Europe, he would pass on ice creams and forego souvenirs. Here, he has brought his haggling skills to bear in an effort to save us cash.  Some of these efforts are part of his lobbying effort to get the computer of his choice.  But mostly this is part of his traveling identity: “mom, dad, I value your cash as much, if not more than you do.” Frugal to a fault.

Now his one foray into turtlecide costs as much as a car payment.

Both he and Wiley were aghast.  Susie and I simply lost it in laughter.  Any suspicion that the restaurant had pulled a fast one on us was dispelled when I saw the look of pride as they pointed with excitement at the turtle as if to say “wasn`t it wonderful?”

Our return bus ride was the perfect cap to an odd day.  On the positive side, we made good time.  I mean physics-bending time. On at least 3 occasions, I heard audible gasps coming from Susie, Terrill and another Chinese woman who were ill-advised enough to actually observe the driving technique.  I was trying to write on an iPad for the blog on the one hour (now 40 minute) bus ride.  From what I can gather, an extra coat of paint on the bus would have been enough width to create impact with at least one cab, another car and perhaps a mule (I cannot be sure - Susie will still not talk about it).

Tomorrow, we will visit a garden, stroll the city and catch a 20 hour train to a rural and much less explored area of China - Guinlin!