The Old Man and the Wall

I admire him, but I hate him.

Yesterday was our day at the Great Wall.  There are apparently multiple locations you can visit on the wall (after all, it is over 5000 miles long), but we chose Mutianyu because of its scenery and the fact that it has a toboggan ride down off the mountain.  [Note: for you history buffs, my research reveals that the toboggan ride was not part of the original defenses against the Mongolian Hordes.  You can expect this high level of historical insight from this blog.]

We rode for 1.5 hours on a bus to get to the site.  We saw the massive urban sprawl of Beijing give way to the countryside as we travelled.  The smog morphed imperceptively into mist, still obscuring, but better to breathe.

When we arrived, we bought our tickets and ascended on a chair lift up the mountain to the Wall itself.  We then had a choice between walking to the right or the left.  They suggest doing one or the other.  We will end up doing both.  This will not be smart.

To the right is a half mile walk along the refurbished wall to a point where you can see some of the ruined walls.  As we entered, a nice woman placed Mao caps on all of us and offered to take our picture with our camera.  This is a very pleasing sales technique. - they do not require that you buy anything.  Instead, someone realized that being fun and funny increases customer interest (we did buy some Snickers).  As we were smiling, she says “1, 2 3, say ‘Chairman Mao’!”  Here is the picture. 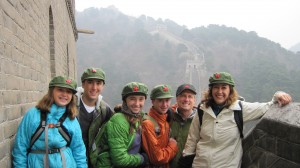 I should share with you that this particular section of the wall is over 80% steps rather than flat area.  From one end to the other is 2.25-2.75 miles (4.5-5.5 miles round trip).  I tried to google the number of steps.  After about 5 minutes, I concluded that the answer is “you don’t want to know).

We then walked over the Mutianyu Pass (the lowest elevation point in this area for the Wall) and then up 500 meters considered the “steep part” where you rise almost 125 meters.  This was rigorous and gasp-inducing for many.  I was OK.  I have been exercising.  Here is a picture of the girls who are still climbing.  I am smiling as I take this. 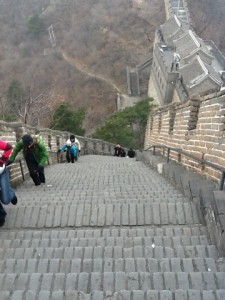 I still love Liam at this point.

After passing through 5 guard towers, we reach the end of the end of the refurbished section and arrive at some of the original (now largely ruined) wall.  We then read the sign telling us to stop, but we continued for another 100 meters to reach a ruined guardhouse (we were among a group of about 8 that did the same – apparently, they are not THAT worried about people going off path). 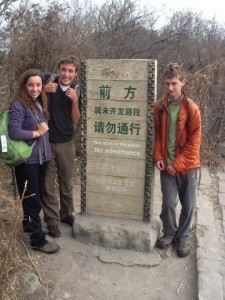 We then returned to the entry point.  Liam has been getting edgy.  He has not appreciated the Susie-mandated photos, of which there were many.  Susie thinks like a mom – we are only here with our family once and we should preserve the magic.  Liam thinks like a teenage boy – the photos are impairing the magic.

Liam has something on his mind.  He heard the tour guide talk ominously about the walk to the left (West).  Here is what the guide said,

Here is what Liam heard,

“You soft tourists are not ready for this Wall.  You should just take some pictures and get back in the bus.”

Liam’s mission was to go the distance.

If you read the literature about Mutianyu, you will see there are 20 watchtowers.  The entry point is tower 6.  The terminus is officially tower 20.  Our guide suggested that there are 3 more gates that you “really do not want to go to.”  Once again, I think Liam hears “you should not go there . . . unless you are a MAN!”

We begin our hike.  We are allowed 3.5 hours on the wall.  We have spent half of it on Towers 1-6 and the trek through the ruins.  We are at tower 1 when we decide to try to go westward.

I point this out to the team.  I assume this will temper our ambitions.  Perhaps we will go to tower 14 and return.  I assumed right, and wrong.  For Susie, the message is well-heard.  Let’s enjoy the lovely day.  The sun has broken through the mist and it is warming.  Wiley has found a way to remove his long underwear without taking his pants off (I do not think I can understand the physics of this exercise, least not explain it).

Liam hears something different.  It is time to get moving.  We pick up the pace.  He is lobbying to go ahead without his mom and younger sister.  I am endeavoring to find a pace in the middle.  I know that Susie will appreciate the exercise.  I am also thinking forward to Nepal and our treks in New Zealand.  Susie has told me that she wants to use China to get in even better cardiovascular shape.  Finding the right balance between the pace Liam wants and a pace that Susie/Virginia will tolerate occupies the next 30-40 minutes.

At tower 14, it becomes clear that we will not stay together any longer.  Susie and Virginia opt to head back.  Liam, Wiley, Terrill and I press on.  The clock is running against us.  We have lunch at 1:40 and need to be at the toboggan by 1:30.

The math is undeniable.  We cannot make it.  Liam does not see it that way.  Without the Susie and Virginia, we move to a much more rapid pace. 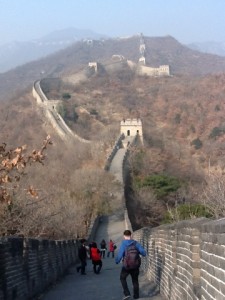 To give you an idea of the task we took on, I share this picture.  I took it from tower 8 when we were still together.  Look closely.  Look in the far distance on the left.  You will see a mountain with some Chinese letters written in white rocks. You cannot really see through mist that these are letters.  From here, they look like more of the road.  Our goal, tower 23, it beyond those letters.

We started to arrive at a tower every 2-3 minutes after we broke up.   I start to feel the pain.  To give myself a little credit, I want to point out that I had done lunges the day before (no, I do not know why).  To be honest, even without the lunges, the steps were becoming oppressive.  From tower 14 on, 90% of the path is uphill.  Imagine being on a Stairmaster for an hour.  Now add a sadistic personal trainer that keeps speeding the machine up.  Oh, by the way, the steps are uneven - some are 2 inches, others are 30 inches!  Are you having fun yet?

I kept trying to talk Liam out of his goal.  I point out that we will be late.  I try to sound reasonable and parental, but the exhaustion in my voice sounds more like quitting than good judgement. We press on.  At tower 20, we see the sign that indicates that the official path ends (as the website indicated).  But Liam has tower 23 on his mind.  I think I know why they have tower 20 as the official stop.  The path from 20-23 is 100% uphill stairs.  Here is Terrill enjoying the easy stroll. 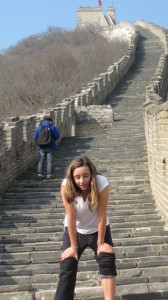 At tower 21, I started to hate Liam.  I will not take you step-by-step.  I can tell you that Liam, Wiley and I made it to tower 23. Terrill came close, but decided to forgo the last bit.  I was using my arms to aid my legs up stairs.  I was sweating bullets. 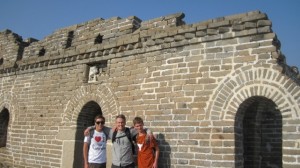 We turned back and found Terrill between 22 and 23.   She was more than happy to turn around. In my mind, she was a complete champion as well.

At the top, we saw it was 1:13.  We had 17 minutes to get to the toboggan.  That would be 1 tower a minute.  Sure it was downhill, but the steps were so erratic that they were a twisted ankle waiting to happen.  Liam went ahead to meet Susie and Virginia at lunch.  Wiley and Terrill were behind me.  Liam made it in 30 minutes, I did it in 35, Wiley and Terrill made it in 40.  We raced down the toboggan ride (each of the checkpoints told us to slow down) and arrived in time to wolf down the last remains of lunch.

As we drove home, I found that I hated Liam no more.  Here the admiration kicked in - the goal-orientation was impressive.  He got himself, his twin and his dad (and essentially his sister) to take on a challenge that we will always remember.  The day was a triumph.  I was proud.

I woke this morning with the hatred back.  My legs are gone.  In there place are two dead limbs that throb with soreness.  Luckily, I do not need my thighs to type.

Today is another walking day, but at least it will be flat.  My hope is that the legs will loosen up.  If so, I will like my son again.