Spanning the Centuries in Xi'an

Let me be honest.  We are a bit pooped.

We arrived in Xi’an with overly-ambitious plans to do 2-3 things a day.

Once here, we discovered a great hostel and tired legs.  As a result, we have been far less aggressive with our schedule and the kids are quite appreciative.  It has also served as an important lessons that sometimes less is more. I might need to be reminded of this lesson a few times on this trip, but it has been an important one for me today.  We are appreciating the company of intriguing strangers.  We spent time today with two English teachers, a Welsh couple who are traveling the world and a father-son pair from Australia.  Being present in the moment is replacing being present at historic sites.

So our agenda that started with visiting the Terracotta Warriors, walling the Xi’an wall, visiting the Big Goose pagoda and shopping was blissfully reduced by a half.  We went to see the Warriors and we walked, ate and shopped.

It is also a quirky, but delightful place.  Surrounded by 25 foot wall that is 16 miles long, it reminds me of some of the European fotress cities.  The wall is the second largest in China (after, of course, the Great Wall). 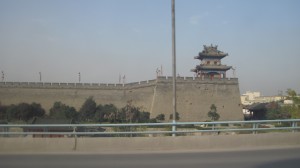 Within the wall, the town center has a Bell Tower (currently behind scaffolding) and a lovely Drum Tower. 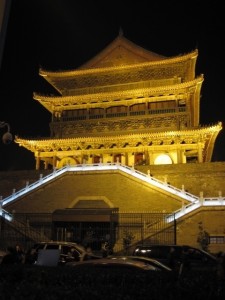 Next to the Bell Tower is the Muslim Quarter I mentioned before.  Vibrant and electric, this area is packed at night with venders and buyers, wonderful smells and odd sights.

We came upon an alley of shops evocative of the bizarres of the Middle East and Morocco - tightly packed with a 5-6 foot walking lane. Normally, I am not a shopper.  I prefer experiences over items.  But travel shopping has a different pull for me.  Susie and I have a series of objects from our travels that encapsulate our memories of the places we have visited.

I had started to lose faith among the silk scarves, knock-off Abercrombie & Fitch clothes and throwing stars. 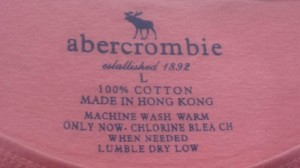 I am sure you are thinking that all we really need is Chinese firecrackers, images of Mao and Beijing Olympic t-shirts.  I admit that these are items to be coveted, but we wanted something unique.

We found it in a 150 year-old embroidered ceremonial robe from the Miao people.  [The Miao are one of the 56 ethnic minorities of  China.  The Hans constitute 90% of the Chinese people, with the remaining 10% being split among these 56 groups.  An interesting trivia tidbit is the fact that these minorities are exempt from the “one family, one child” rule.  I do not pretend to know why.]

Here is the robe: 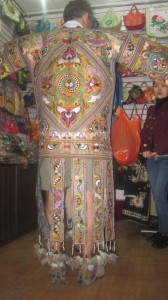 After a long negotiation, we managed to find a price that worked for the sweet woman who ran the shop and us.  We did not dare sic Liam on her.  His style is perfect for commodities, but not for singular pieces like this one.

We picked up a few small items and continued on to a moveable feast of street food. 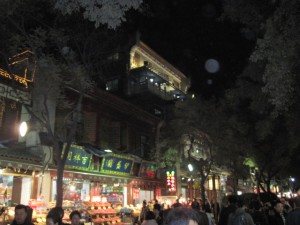 The kids sampled a plethora of gastronomically delights.  They loved their first pomegranate, delighting in the taste as well as the fun of pulling out the seeds.  Once they discovered the taste, they were like piranhas after a bleeding bull.

The  lamb kebob we enjoyed last night was a big hit today as well.  [Note: the boys are fortunate that I allowed them another helping.  They spent the entire day telling me that I had paid 5 times too much for these delectable skewers. At $1.60, I thought them a true bargain, but they insisted they should have been $0.35 based on conversations with other people in the hostel.  They were certain that the locals were paying this better price.  I was sure I had seen at least one guy pay the same as I did.  It even became the source of stories with a great pair of Australians we met.  When we returned to the Quarter tonight, we saw vastly inferior beef kebobs with much less meat of lesser quality that sold for $.035, but upon returning to my lamb man, we found a 10 minute line of people waiting to pay $1.6 for their skewers.  I chose to forgive the boys, but I will not forget!]

We came upon a man pulling a thick silvery substance off a think steel hook using a smaller hook.  As he pulled it, he cut it into 5 inch sections and then rapidly handed them to two women behind him who then cut them into nickel-sized chunks.  By the time they got the 5 inch piece, it was so hard that they had to occasionally hammer their scissors to make the cut.  He was making ginger candy, which the kids quickly decided was among the true joys of China. We also tried an empanada-type dish with veggies in one and a meat-like substance in the other (it tasted like really good Taco Bell meat, if that is not an oxymoron).  The only epicurean failure was the bean cake.  I would describe it as an almost neon green with raison-like chunks in it.  If you have ever seen the high-end artisan soaps that are often exotic colors with odd substances suspended in them, you can imagine what the bean cake looked like.  Now imagine eating the worlds largest lima bean.  Bean cake!  I only wish I took a picture of the look of horror and betrayal on Virginia’s face as she tried it. 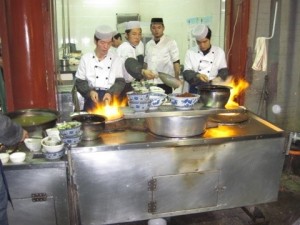 People are packed in the street - laughing, bumping into each other and smiling.  Every minute or so, urgent beeping from a moped or bike punctuates the low din and encourages people to part briefly for the passing 2-wheeler, only to collapse back into the mass second later.  Despite the tight quarters, we feel safe.  We have a lock on our backpack for extra security, but no one seems to be inclined to bother us.

Two blocks from this quintessentially Chinese street food experience is another equally quintessentially Chinese street.  If the Muslim Quarter is like a time machine to 19th Century China, the adjacent avenue is a massive monument to modernity.  The buildings are all less than 20 years old and over 10 stories tall.  Cars speed by at normal speed, a huge contrast to the bikes. Electronic signs featuring familiar brands like Apple, Nokia and Starbucks replace the hand-made wooden signage.  It is closer to Times Square than the Muslim Quarter.

I then noticed something really odd.  Every store on a particular side street sold mobile phones - every single one.  I counted over twenty stores selling essentially the same products.  No single possession embodies the Chinese move to modernity than the mobile phone.  China and most of Asia was years behind the West in infrastructure - our cities and villages were all connected with telephone lines.  Doing the same in China would take decades.  The development of mobile phones enabled Asia to leapfrog us in many ways.  Instead of millions of miles of cable, they only needed cell towers.  Now, they have not only telephone connections, but internet as well.  And the youth know it.  Phones define the individual.  They are on their phones even more than American teens, if that is possible.

We now rewind to our day trip was to the Terra Cotta Warriors of Emperor Qin Shi Huang.  OK, if you are like me, you go blank when you hear about the different Chinese Dynasties.  Please take a moment to make an exception.  Qin Shi Huang is worth knowing about.  He predated Julius Caesar by roughly 2oo years.  Here is his impressive resume:

In  a good year, I am happy when the summer is safe and happy.  If we get some travel in, I am elated.  I have (to my knowledge) never unified 56 ethnic groups, built a structure recognized from space or made my own mausoleum.

But this guy was a bit crazy.  By “a bit” I mean “looney as a bird”.  He believed he needed an army to accompany him into the afterlife, thus the warriors. He killed one worker for every terra cotta warrior that was built.  Allegedly, each worker created his own facial imagine on the warriors. Many carved their names into the warriors knowing they would be killed upon completion. No two warriors are alike and many reflect the unique looks of the different Chinese tribes. Although the faces differed, the bodies were all large in Qin Shi Huang’s desire for enormous afterlife bodyguards.  He was inclined to cut of ears, noses and tongues when displeased.

He consumed mercury to extend his life.  This habit did not work out so well for him as he died at age 57 of heavy metal poisoning.  His tomb is surrounded by a superfund “mercury moat” and he was buried with his 3,000 concubines.

Nevertheless, he was China’s Alexander the Great.

His tomb is at least 5 distinct sites: his burial sites and four different areas (“pits”) housing the terra cotta army.  The Chinese have started to excavate 3 of the 4 pits.  They have not started the fourth nor have they approached Qin Shi Huang’s tomb.  The buried moat of mercury surrounding it makes excavation highly hazardous.  They plan to go into it in 2-3 decades.

The pits each house a different portion of the army.  Pit 1 is all infantry.  Pit 3 is the command center.  Pit 2 has archers, calvary and lance-men.  The site is remarkable and difficult to describe, so I will try to use photos instead. 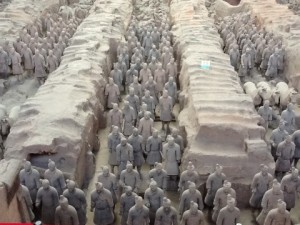 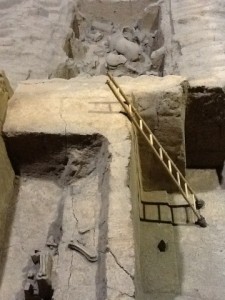 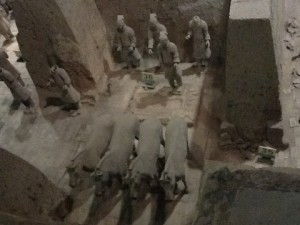 The chariots was made of wood and has long since rotted. 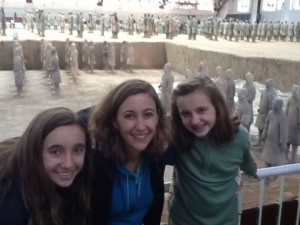 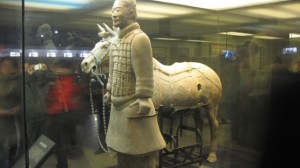 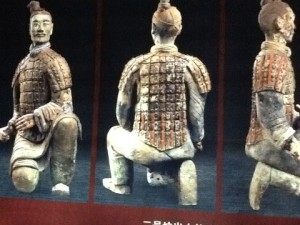 This photo shows a Kneeling Archer that our guide called “magic”.  I am not sure I would use that word, but it is extraordinary.  In 1974, a farmer named Yang was digging a 5 foot water well when he came upon this statue.  Until then, no one knew the Emperor’s tomb was there.  No one.  One of the reasons he killed the workers was to keep the site a secret to prevent tomb raiders.  It worked.  For almost 2300 years, it lay there unknown only to be discovered by a farmer.  The government then paid Mr Yang 10 Yuan (the cost of my lamb kebob) and started to excavate.

This archer came out essentially 100% intact (with part of his toe missing). It still has remnants of the red paint on his armor.  To date, it is the most complete statue to come out of the ground.  The first and the best out of 8000.  I think that is noteworthy.

We have one more day in Xi’an and will board an overnight train to Shanghai tomorrow around 6.  Until then, stay away from the mercury.