Smurfs. A Ridiculous Number of Smurfs

We are about to start the second leg of our journey, but before doing so, I must take care of some unfinished business.

You see, I made a promise to blog about Smurfs.

First, lets take a moment to think what a rational person 40 years ago would think about that sentence - “blog about smurfs”.  A typical native of the 1970s might not have know that those bell-bottomed jeans were a bad idea, but he would have been pretty sure that” blogging” and “smurfs” would be topics inappropriate for mixed company.

Second, the Smurf blog was born when we saw the following poster in Denmark.  We thought that it was amusing that “Smurf” does not translate to “Smurf”.  I wondered why the Danes felt a need to have their own unique moniker for blue gnome-like cartoon characters. 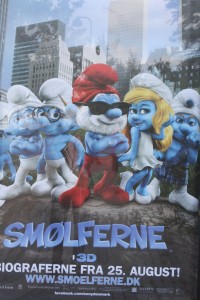 We underestimated the need for every nation to assert its own name for these odd creatures.

Perhaps the fact that “smurf” is both a noun and a verb is the reason that each language has its own name.  I suspect that this will remain an unanswered mystery.

Here are the entries from other nations.

I think the next is my favorite.  Help me understand how “smurf” translates into this?

In Austria?  Thinking about Maria Von Trapp and a few of your favorite things?  How about a little Smurf soup?

In Italy, the Smurfs are “I Puffi” (“ee poofee”).  This led to a ridiculous argument about whether the Patron Smurf was “Papa Smurf” or the “Big Ee Puffee”.  Happily, I was not a participant in this talk. 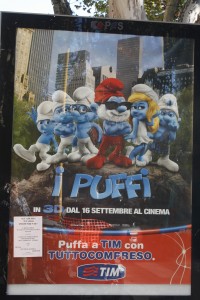 If you thought Andorra would not have continued our Smurf journey, you would be wrong.

In Barcelona, they were part of a huge supermarket promotion campaign.

Oddly enough, the French Smurfs (Les Schtroumpps”) were not suffering from ennui or smoking. 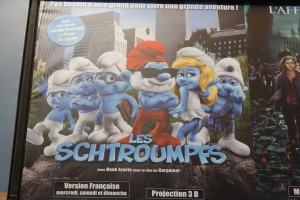 Finally, the most English of symbols (the double decker bus) is adorned with Smurf magic. 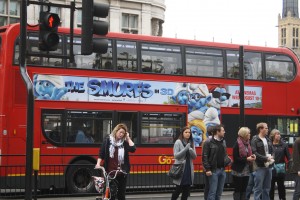 OK, I am glad I have shared this with you.  I hope your life is richer for it!