Respecting Elders, At Least Most of the Time

I will get philosophical in this blog.  Consider this a warning.  Before I dive in, I will share one nice family picture to start.  I will include more shots at the end.  In the meantime, I need to share. 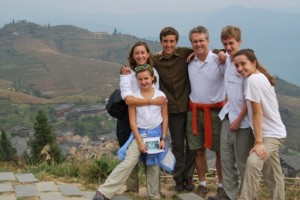 You might want to be seated before I drop this bomb on you.

I am not getting younger.  In fact, some evidence seems to suggest the opposite.

I know, this might seem shocking, but let me assure you that it might indeed be true.

There is some evidence that I am not getting old, but Susie is quick to point out that you can be Sophomoric AND old at the same time, so most of my arguments for my youth are not really valid.  Just because I laugh at some of the same things that amuse a 5 year-old do not make me a 5 year-old.  Indeed, all it really means is that I can embarrass my children.

Do not get me wrong.  There is no dollar value I can put on that, but it does not make me young.

So I write to you as a Mature Man. I am choosing to embrace this moniker.  Mature Man sounds better than Fading Father or Old Man, so I am going with that.

While I have been huffing and puffing up the Great Wall and raging against the ravages of time, I am coming to accept this reality.  I am comforted by the fact that I continue to connect with my children and the campers without being young.  Despite our culture’s worship of youth, both groups seem incredibly willing to listen to and learn from a Mature Man.

I do not like the tendency of Disney and Nickelodeon to portray all adults as dolts while the tweens deliver witty repartee deriding their elders.  If you have not observed this phenomenon, take a few hours to peruse the offerings targeted at kids aged 8-12.  In each, the heroes are attractive, talented and resourceful teenagers.  Often there are no adults.  When there are, they are generally portrayed as clueless bumblers that must be either ignored or saved by the teens.

I can see why this might appeal to a child or a tween, but it seems to push the viewer in a dangerous direction.  Not only does it fail to say “respect your elders”, these shows seem to provide a detailed dissertation on why they are simply not worthy of respect.

Despite this pap, I find children hungry for the thoughtful insight and advise of their elders.  They are not always evident in this hunger.  In fact, the culture (as I describe above) seems to tell them to seem indifferent or bored with the older set, but be ye not fooled – they care what we say and how we say it.  We simply need to rise above the idiocy of their TV shows, songs and movies – they are willing to do so. 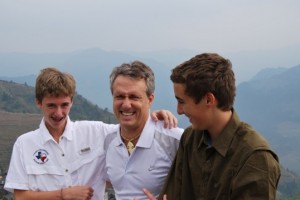 Ironically, I have a story to share about an older traveller in our hostel that might seem inconsistent with the thoughts I just shared, but they are not.  Yes, I did not like the traveller, but it had nothing to do with her age.  In fact, we have loved meeting several seniors on our travels.  I have been so proud to see our kids (Virginia in particular) embrace them and crave their stories and company.  The following story is more about her imperious attitude than her age.

I see this trip as a chance to model for our children.  I want to be flexible, open to new experiences, quick to laughter and slow to anger.

I want to be generous of spirit and kind.

Yet we all have our weak moments.  My encounter with Valerie numbers among mine.

Last night as I was blogging at the Riverside Hostel, I encountered a woman who jostled my generosity.

It started as the phone rang in the office.  The sweet woman who runs the front desk answered it quickly and pleasantly.

Ten minutes later, she arrived with great aplomb.  She has two Chinese men in her wake.  They both seemed agitated.  I would soon learn why.

Valerie, an elderly British woman with a cane, invaded the reception area with an air of privilege and authority.

“Yes.”  The deja vu is kicking in at this point.  I have heard this dialogue before.  I stare intently at my keyboard in an effort to appear invisible.

“Well it depends on the room.  Please take me there now.”

As they rose to go, the two Chinese men became even more irritated.  They spoke to the front desk manager in Chinese.  She took a deep breath, turned to Valerie and spoke,

“They would like you to pay for the cab now.”

“Tell them that they can wait.  If the room is acceptable, they will help me with my bags.  Go on - tell them.”

She exchanged words the men and then said, “OK, they wait”.

I wonder what exact Mandarin words they exchanged.  I suspect they were less generous that her taciturn reply.

5 minutes later, Valerie and the receptionist returned. Valerie declared the room acceptable. She told the cab drivers to deliver her bags to the room.  Thereafter, she got into a spat with the two men.  Apparently, they were asking for an additional 2-Yuan ($0.32) to compensate for their 20 minute wait.

She was having none of that.  She paid them $1.25 and sent them on their way.  I still have no idea how she managed to corral two of them to help her since cabs are exclusively solo operations.  I suspect she engaged the other man to help with her bags and then asked him to join her.

I have idea if she was intentionally deceptive to the two men or if she simple did not think about them at all.  Neither option made her more appealing to me.

After a demanding check-in process, she turned her attention on me.

I was initially tempted to respond, “Soy un sudamericano.  No comprendo.”  Instead, I opted for honesty.  In retrospect, I might have been better served being Peruvian.

“Oh an American.”  Her voice had an air of disapproval.   To be honest, I almost expected her to call me a colonist.

She began to drill me about my plans.  What was I doing tomorrow?  The day after?  How much did it cost? When would I leave?

During her questions, I felt like a failure.  Susie has been planning this part of the trip, so I was essentially in the dark.  I shared my standard answer, “I am married to a brilliant woman who tells me where to go. I show up on time.”

Her reply?  “If I had found one like you, I would not be twice divorced.”

I suspected that there might have been other reasons for her marital struggles, but I deemed this assessment better left to my own thoughts.

We talked for roughly 30 minutes.  I endeavored to be patient and helpful, but I also faced the fact that I still had to finish my blog and it was after midnight.  We had an early departure, so I begged her permission to continue writing.

Upon completion around 12:45, I returned to the room, woke Susie and shared the story.  I did not wake her out of meanness.  Chinese hostels do not like to issue more than one key per room and these card keys are required to power the electricity in the rooms.  This is a clever way to assure that guests do not leave lights or AC on while they are not in the room, but it means that the only key is inside when I return after a late blog.

Susie listened lovingly and told me to go to sleep.

The next morning, she went downstairs to order breakfast at 7:15 for everyone as we had an 8AM departure.  I was still working upstairs at 7:45 when she came upstairs again.

“You need to come down now.  The woman you met last night wants to eat your food.”

“They brought your eggs 5 minutes ago.  She seems concerned that they are getting cold.  She has reached for them and volunteered to eat them for you.  If you want some food, you need to make an appearance.”

Once down, I ate found her eying my food, but all was still there.  Once I parked in front of my meal and started to eat, I asked her about her plans.

“I am joining you today.”

Here is the moment of my greatest failure.  I should have said that this was wonderful news.  Or, I could have introduced her to my children who would be joing her.  Instead, I looked like a deer in the headlights.

After a couple of seconds, I recovered and said this this would be great fun.  “When did you get your ticket?” I added.  I had told her the night before about our early departure and the need of a ticket.  She seemed to hear the former but not the latter.

She went to the front desk to ask about the ticket.  The woman at the desk was the same individual who had worked the night before. I have come to realize that the typical hostel pays its workers relatively well, but expects 14-17 hour shifts from them.  She called on behalf of Valerie to inquire about the tickets.

“I am sorry, they are full today.  You go tomorrow?”

I have heard sentences that made me happier.  Susie accepting my botched proposal (a good story for another time) is one such moment.  “Both boys are healthy”, “It’s a girl”, and “It’s a girl” all jump to the top of the list.

Hearing my favorite sports team declared “champion” is up there too.

But I would be lying if I did not tell you that this sentence was way up there.

Susie, who had quickly come to share my opinion of Valerie, had the same reaction.  We both reacted like characters from Seinfeld, with words that said one thing, but without the proper vocal intonation to deliver sincerity.

Within 10 minutes, the bus arrived. We had a wonderful day trip seeing the terraced rice fields and the “Dragon’sBackbone”. 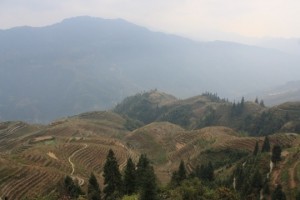 We also watched a fascinating show performed by a Chinese minority that have women in the Guinness Book of World Records for having the longest hair in the world. 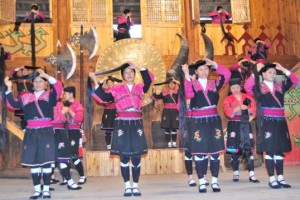 We went to a lovely tea ceremony. 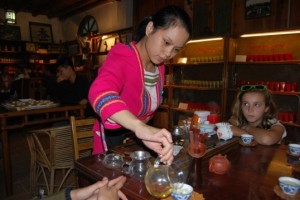 We did is with just the Baskins.

I hope Valerie had a good day as well, but I am glad it was elsewhere.