Some days the creative juices dry up.  Insights are slow to come.  Clever commentary seems elusive.

I am guessing this is one of those days.  As you might have guessed, this was a transition day.  We have spent two nights in the village of Xing Ping among the ethereally beautiful mountains surrounding the Li River.  We had planned on spending a third, but our night bus to Shenzhen (outside Hong Kong) would not pick us up in Xing Ping.  Instead, we would have needed to take a bus with all out gear to Yangshuo and waited at the KFC until our 10:30 pick-up.  [Yes, I said KFC.  We have only visited one place (Xing Ping) that does not have one.  KFC is a common a sight as posters of Mao.  In fact, I am starting to think these two guys might be brethren:

I don’t know - separated at birth?  Both are iconic faces.  Both suggest wisdom and solidity.  Both, however, had their secrets (the herbs and spices for the Colonel, the victims of the Cultural Revolution for the other).]

In any event, we thought that waiting with 4 kids and 12 pieces of luggage until 10:30 at KFC seemed more like a Medieval torture than a travel strategy, so we opted to come to Yangshuo a day early and stay at a hotel the the bus will come directly to. 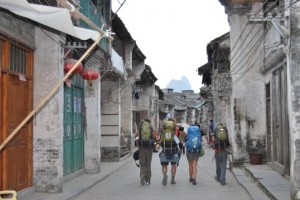 Yanhshuo is essentially Breckenridge - a huge magnet for fun, young people who want to stay up too late.  Much is made about whether one stays on West Street or not.  I will not spend too much time describing West Street.  Lets just say that every 5th or 6th storefront is a bar - with at least one pole in it.

Happily, we are NOT on West Street, though we did walk it when it was still a mish-mash of interesting vendors and not just a bar scene.

During the morning in Xing Ping, we decided to climb one of the local mountains to see the pagoda built at its peak.  It was not a true climb - we were aided by stairs - but it was not a casual stroll.  After ascending 130 stairs (roughly 11 stories) we came upon this sign: 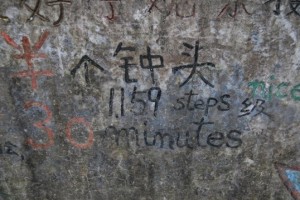 On the bright side, the peak was only another 97 stories.  The bad side is that our bodies are equipped with sweat glands and pain receptors.

We did reach the top, but we definitely took time to appreciate the view before descending.

Here we are at the top.  The view was truly stunning. 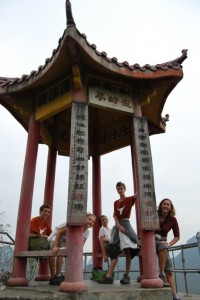 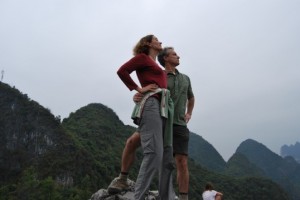 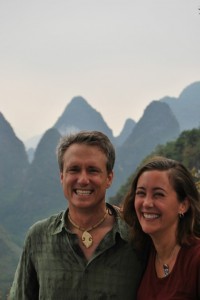 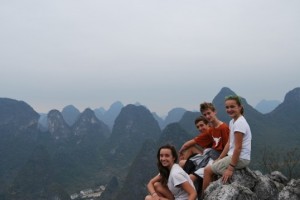 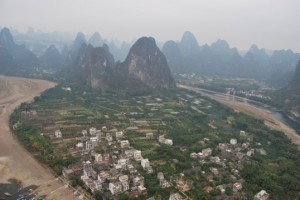 I should mention two other aspects of the ascent (other than our physical struggles).  First, this path was not built to code - anyone’s code.  In the US, stairs must have risers that are essentially uniform in height (8-8.5 inches, I think), but this path was wildly erratic.  It also featured hand rails that were ladders cemented on their sides that were 12-18 inches too low to provide either help or safety.  Ladders would appear suddenly that were ill- positioned or partially rusted out. 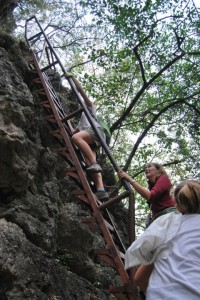 But worse than the questionable safety was some of the souvenirs left by previous hikers.  I saw several dozen cigarette butts.  I do not care what you think of smoking, taking a drag on a demanding 900 foot ascension does not seem like the best idea.

But no cigarette butt could compete with this dicsovery: 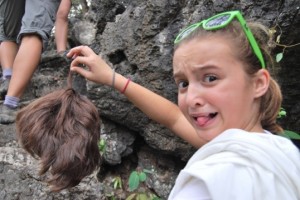 Please help me out on this one.  I can only assume that my 3 weeks of travel have dulled my mental faculties because I cannot conceive of any story that fits the following scenario: “I was hiking up a rigorous climb when I suddenly decided to drop my hairpiece”.  It was not tossed into the woods.  It held a place of honor next to one of the ladders.  I also suspect that losing a head of hair is not an experience that you miss (like change falling from a hole in your pocket).  In short, I am at a loss.  If anyone can explain how this hideous toupee ended up in Virginia’s hands (albeit, only temporarily and before a massive application of hand sanitizer), I would be deeply grateful.

Tomorrow, we bike ride to see two famous sites, return and await the night bus.  This would be a bus with beds in it. You might wonder why no such thing exists in the States.  My deep, deep fear is that I will have the perfect answer for you in less than 36 hours!