Our train trip was uneventful until an hour or two before our arrival in Guilin.

“Steve, I did not write down the address for the hostel we are staying at.  When we arrive, please go to my email and check it for me.”

“But we have not had internet at a train or bus station yet.  I am almost sure we will not have it in Guilin.  What is the name of the place?”

This did not seem to bode well for a smooth arrival into Southern China.

We arrived at noon and walked off the train.  I think we must have radiated helplessness because a nice woman selling maps saw us, pointed to an “Information Office” sign and beckoned us to follow her.  We arrive in a sparsely furnished office and she quickly calls a number on a phone, talks for 10 seconds and then hands us the line.  On the other end is David.  David speaks English.  At this moment, David is the finest human on the face of the earth.

David comes to the office 10 minutes later.  Not only does he confirm that we are staying at the Riverside Hostel, but he helps us answer every other question we had for the next 4-5 days. 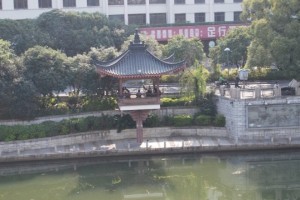 We book a trip to see some of the minority villages and the “devil’s backbone” rice terraces.  We secure a boat down the Li River.  We get advice on the right places to stay.  We even find a much better and less expensive way to get to Hong Kong 5 days from now .

The outings we booked through David would be 50% more expensive at our hostel 1 hour later.

In short, Susie forgetting to write down the name of our hostel eventually saved us $200 and several hours.

Once again, my faith in the basic decency and helpfulness of humans is confirmed.

Before we leave David and his spartan office, I should explain how Virginia ended up with a backpack full of glass and beer.  The following segment is an excerpt from an upcoming article on “Poor ParentingPractices”.

In addition to David, the office had 3 women who were between 25 and 35 who were helping sell maps and meet people coming off the train.  This trio did the now-ritualized set of hand signals: 1) point to each of our kids, 2) hold up 4 fingers, 3) look at Susie, 4) shake the head in disbelief.  They were particularly smitten with Virginia, which is also normal.  Her big eyes and round face are a huge hit in China.

Our reservations required a fair amount of work with David, so the kids were left to watch Chinese soap operas as we worked.  [Note: the inability to follow the dialogue of the soap operas was oddly an improvement over the American equivalent.]  Virginia was particularly bored, so she chose the only reasonable course of action - she spun in circles until she collapsed in a heap.  We heard a sound (a bit of a “shlump”) and saw the three nice Chinese women staring at the floor with their hands over their mouths.

I think they were confused with Susie’s reaction.  Virginia falling unexpectedly is standard fare in the Baskin house, so Susie was more worried about the nice women than Virginia.  The women kept waiting for Susie to pounce, but it did not happen.

As we were leaving, we had a second incident.  It is a bit embarrassing, but it stems from Virginia’s desire to help and hatred of waste.  We had a large bottle of beer that we bought for the train ride that we did not drink.  We were ready to leave it, but Virginia would not have it.  Instead, she volunteered to carry it in her daypack.

This would be the same daypack that she balanced precariously on the arm of a chair in the office.  As we were gearing up to leave, she brushed against it and knocked it over.

We now had a 10 year-old’s backpack full of beer and its accompanying bottle in a Chinese travel agency.  The three women, until now quite demur, simply lost it.  They covered their mouths, but to no avail.  They were cackling.  Virginia was embarrassed and temporarily distraught (the Kindle was OK, thankfully), but the clean up involved a previously unseen combination of sweeping and giggling.

Once at the Riverview, we showered and did a little laundry.  One of the aspects of long trips is the inevitability of the mundane.  A 5 day trip to New York does not involve laundry, but a 2 month trip to Asia does.  We are hitting several different climates.  Beijing is roughly the same latitude as Philadelphia.  Guinlin is roughly th same as Cuba.  We will go farther south yet.  Eventually, we will go so far South (the South Island of New Zealand) that we will be as far South as Maine is north.  In short, packing becomes tricky.  So when you are in a particular climate, you tend to wear the same things, thus making the laundry runs more frequent.  [Note to the parents of boy campers: we know that your sons will often strive to wear the exact same outfit for several days not out of necessity, but instead out of some ill-placed desire for self-expression.  If you see us wearing the same things in these photos, please know that it is for completely different reasons and that this is not some bizarre Champions tradition.]

Knowing that we have an early departure and a full day tomorrow (and because we had low expectations for Guilin), we decided to get an quick dinner and retire fairly early.

On the way to eat, we saw a wedding couple outside a restaurant.  In fact, this couple was the second we saw within 5 minutes.  Both were standing outside a restaurant with a plate of something (candies?!).  We were not sure if they were giving treats and taking gifts.  In any event, I wanted to shake this man’s hand.  He, like me, has married better than he deserves. 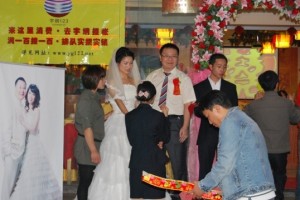 We found a lovely restaurant at which we experimented again (happily, nothing as odd or expensive as Thanksgiving) and started to head home.

On the way, we saw the two pagodas perched over a central lake that give the city an air of solemnity. 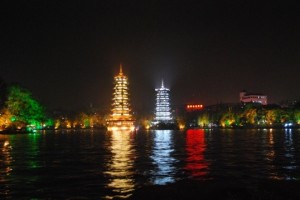 We also came upon a spectacle.  I guess that is the best word for it.

In the middle of an unusually large square, the city had set up a stage.  As we walked by, the event was beginning.  I am still unsure of the purpose or the occasion.  I have no idea what the unifying them was.  Most of the performances seemed to involve young people, but not all.  Some elements felt like a talent show, others a formal performance.

In all its elements, it was surreal.

It started with a couple hosting who looked like they were dressed for a Miss South China contest: man in formal suit, woman in blue evening gown.  They were clearly burdened by terrible dialogue that involved each of them speaking individually at times and in unison for others.  People were cringing at their repartee, so I know it was written in the great tradition of Terrible Host Dialogue.

After their introduction, a massed choir of students armed with red flags and flowers sang the National Anthem as a group of four young men marched the Chinese flag into place. 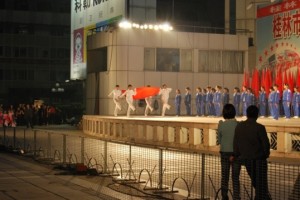 After the National Anthem and a lot of red flag waiving, we went to our second act.  I am absolutely tickled to report that it was a group of roughly 100 students dressed in white (with white gloves) who performed - wait for it - the exact morning exercise routine that had so delighted me when performed by the Shanghai school.  This is the pre-school, post flag-raising routine that so fascinated us from our hostel window.  It also confirmed our suspicion that every school in China has been performing the exact same routine every morning. 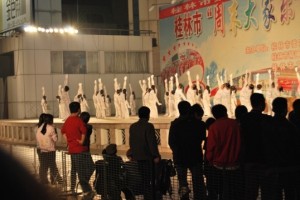 The next act was painful.  A woman in yellow belted out screeching Chinese opera as some teens spun parasols and others brought her arrangements of fake flowers.  If you have never heard Chinese opera signing, I would suggest Googling it and then leaving the room before it starts.  Or, alternatively, you wait for the local cats to go into heat.  The two are similar, though the cat tends to follow a more comprehendible tonal pattern.

We were about to leave when the show picked up.  A few additional lines from our hosts and the next act quickly came to a stage. There were an excellent dance troupe that were athletic, graceful and (after their recording failed mid-song) sufficiently determined to finish in silence.  Their moves were original and elegantly executed.  The fact that they finished in silence did nothing to diminish their accomplishment. 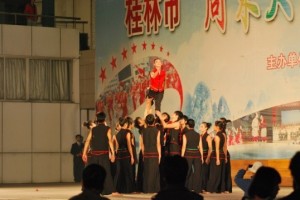 The next act was a traditional fan dance featuring roughly twenty young women.  Like the previous dancers, they were skilled and engaging.  Unlike them, they managed to have music throughout their performance. 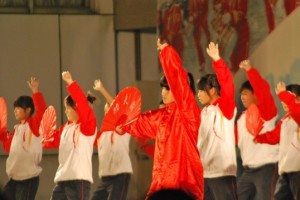 The show now took a turn toward the bizarre, with two acts clearly inspired by American culture.

If I were to ask you to name elements of our culture that you most wanted to export, I suspect that your top two choices would not be “pom-pom dancing and Michael Jackson-esque dance routines”.  Sadly, you were not in charge of this show.

Here are the gals with the pom-poms. 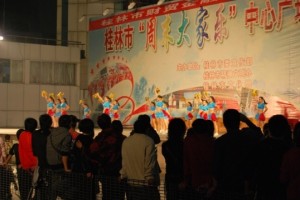 And the Michael Jackson homage: 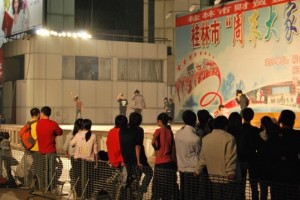 I guess on the bright side, we did not see any Chinese Ganstah Rap (though I must say that the prospect does amuse me).

Tomorrow, we have a day long trip to see the terraced rice fields and some indigenous folk rituals.  Should be a fun and educational endeavor!