Odd Clappers, A Bummed Employee and a Heavenly Temple

We are on a soft sleeper train from Beijing to Xi’an.

Susie, the girls and I are in one berth while the boys are sharing a room with a baffled Chinese couple who, judging by the looks they are giving the boys, have seen too many films about Western adolescent misbehavior.  Wiley and Liam have tried to wave, smile and nod.  The couple does not wave or smile or nod back.  Instead, they gaze worriedly at the boys while clearly hoping that neither is a gang member.

Our efforts to get to the train confirm my love of travel but hatred of transitions.  In other words, I love the adventure and discovery of travel, but I hate the logistics of catching trains or planes.  I dislike thinking about the best ways to get to airports and train stations (cab or subway) or how early to depart.

We chose to order a cab to take us to the train station.  After being assured by the Happy Dragon reception desk that a van capable of moving 6 and their luggage would take us, we saw two separate sub-compacts arrive.  Together, they could comfortably take 8 people (10 if cramped).  They would need to take 8 (us and the driver) AND 6 huge backpacks, 6 daypacks and some groceries for the train.

I was not excited about getting separated.  We have never been to the West Train Station and would have no reliable way to find each other if we arrived separately.  Given the maniacal manner that Beijing residents drive, getting separated seemed more like a sure thing than a possibility.

The fact that one of the drivers turned the wrong way into a one-way street in the first 2 minutes did not help add confidence.

Happily, his partner took charge, went in front and rode with his hazard lights on.  We made it with time to spare and are now onto our next site.

I found the drive extra-stressful given the fact that we had thought we were lost about 1 hour earlier.  We spent the day at the Temple of Heaven and walking around Hutongs, the original Beijing neighborhoods.  As we walked back to the hostel, we approached our neighborhood from an entirely new direction just as the sun was down.  In the dusk, our maps were even more difficult to read.  Many streets were written in Chinese only.  The major streets were also in English, but the English words were written in a red ink that was virtually invisible in low light.

I had identified a general course south and east that we had followed for around 45 minutes.  As we were just 5 minutes away, I began to doubt our course.  Nothing was familiar.  Then they all the storefronts and signs started to look alike.  We had not been disoriented our entire time in Beijing, yet here we were with cabs to catch wandering about. I thought we were close, but I saw nothing that would confirm this.  After stopping a college student in the street, we learned that we had been on the right course the whole time.  This fact, however, did not reinstate my comfort and confidence.  I was still rattled when we entered the cabs.

While massive, the Chinese got the proportions correct here.  The structures are large enough to inspire, but not overwhelm.  Fresh off a pre-Olympic repainting, the main temple is radiant with its blue tile roofs, and icons of dragons and phoenixes.  Rising out of white marble, it punctuates the sky with grandeur and subtlety.  Here are some pictures of the temple and it surroundings. 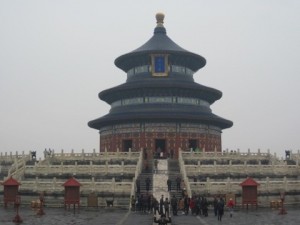 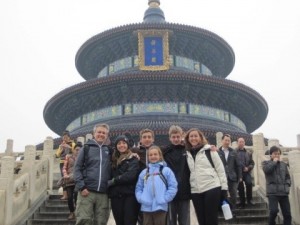 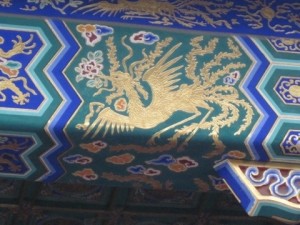 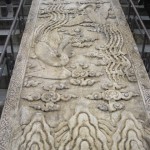 Other important ceremonial sites are connected with long esplanades and then surrounded with gorgeous trees. 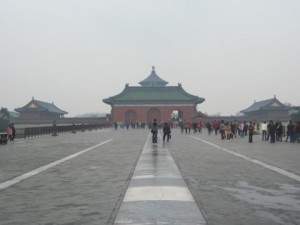 Thousands of the trees are “century trees” (older than 100 years), with a few over 800 years old.  The cypress and juniper that they selected for this sacred site grow in exotic ways. Rather than getting taller, they tend to become gnarled and twisted.  They look like the most interesting of bonsai trees, only 25 feet high rather than 10 inches. 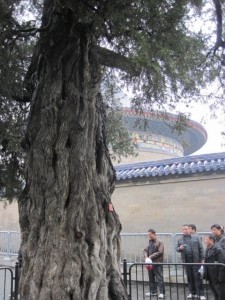 In the park, people were practicing Tai Chi and playing card games.  There was a group of 20+ folk dancers all adorned in their traditional garb dancing in unison for an hour or so. I have no idea if this was a performance or a practice.  They did not seem to care.  They had the same expression as the tai chi practitioners: calm, serene and focused.

A final group was mystifying to me.  Roughly 35-40 people were standing in a loose group clapping rhythmically.  As they clapped, the leader would say a statement that the group would then repeat.  It was not vigorous enough to count as exercise.  It did not seem fervent enough to be political.  It was not interactive enough to be social.  Yet they kept doing it.  All the participants were over 50 years old.  Occasionally another person of the same age would stroll up and start to clap and join in.  The rest of our team found this less intriguing than I did, but I just stared.  What did they get out of this routine?  It was a workday (Thursday), so it is not a special weekly event – or was it?  Did they all leave their homes at 3 PM to join the clap circle?

Could this be “Occupy Temple”, a Chinese answer to Occupy Wall Street?  Rather than young, rebellious protesters with drums, we had retirees clapping? 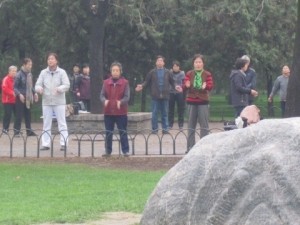 I remain baffled.  If anyone reading this knows what it is, please let me know. A google search calls it exercise, but that seems to be setting a low bar.

We then walked the Hutongs.  These neighborhoods are all 1-2-story buildings with red doors, inner courtyards and terracotta roofs. 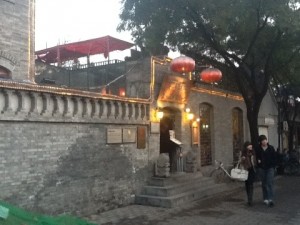 They were oriented around the Drum Tower and the Bell Tower, which would indicate the time using (you guessed it) drums and bells. Originally, 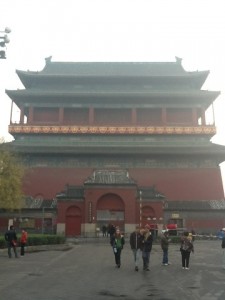 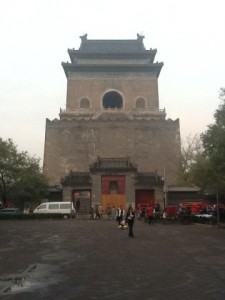 Beijing natives that were not royal lived in neighborhoods like these.  As China has raced into modernity, these neighborhoods slowly eroded away.  Traditionalists bemoan their loss, but it was unclear how to save them when the underlying real estate is so valuable.  The answer seems to be in high-end (and highly western style) boutique businesses.  Some sell exotic crafts, others funky clothes. 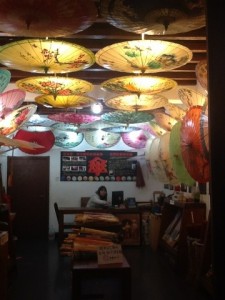 The restaurants and cafes have a fusion style of décor that is Chinese yet Western at the same time.  Some serve western food and drink.  For those of you who have been to Austin, it was like South 1st Street with red doors.

Before we turn our sites to Xi’an, I would like to wrap up my thoughts on Beijing.

Beijing is massive and modern, yet subtle and ancient.

It is the capital of the largest communist country in the world with the most robust and hustling free market I have ever seen.

Everyone seems to work hard and smoke hard.

Many of their ads feature Western models.  I do not know if this is because the look is fashionably different or if they long to look differently.  I suspect the latter.  One of the great skills of advertisers is to make us unhappy with our current appearance, thus creating a longing to buy their products.

Western brands are huge among the 20-something set, though most are clearly knock-offs.  I saw a sweatshirt with the words “Abercrombie and Hitfc” on the chest.  I love the fact that the wearer did not know it was misspelled.

They carry their children rather than use strollers, even when the child is too large to carry.

They spit a lot.  I mean, a lot.  Obviously public expectoration is not considered rude. After 5 days, I think it might actually be considered polite and encouraged.

They have a staggering number of public bathrooms.  These facilities are coupled with a staggering dearth of public restroom cleaners.  These places reek so much that you know they are coming 30 feet away in all directions.  I can only assume that the government took the people’s olfactory facilities when they took some of their human rights.  Here is a picture of one of the few bathroom cleaners.  I think this expression says it all. 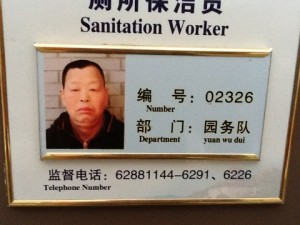 PS  Before I depart, I just have to share a final photo.  Every now and then, you see a sign that addresses a problem that you never really thoughts about.  You wonder about the story behind the sign.  This is one such sign - I suspect the backstory is a painful one: 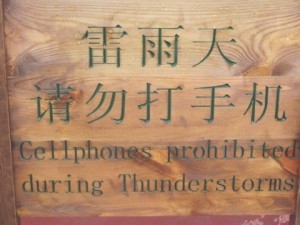