We awoke this morning to the sounds of an assembly.

Our hostel overlooks a Chinese school.  At 8AM sharp, music blared and megaphones began.  Children gathered in their school doors, ran onto a huge recreation yard and then lined up by grade.

From there, a precise ritual began.  Their schoolmaster asked them to clap for 10 seconds and then barked a command.  The students extended their arms out to assure perfect spacing 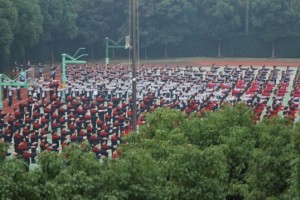 they are then called to attention and turn in unison to face me! 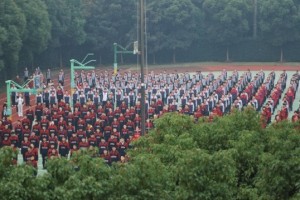 Oops, it seems the might have turned to salute the Chinese flag and not me.  My mistake. 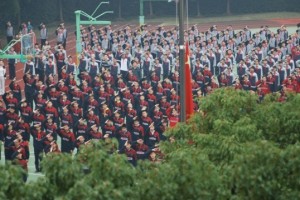 They then turned back to a platform with an administrator and two older students whereupon they began a 10-minute period of choreographed calisthenics.

The exercises lose something in the photos.  It reminded me of the Opening Ceremony of the Beijing Olympics with great synchronization of motion to music.  It was not nearly that good, but it was well-rehearsed and rhythmic.  With the schoolmaster were two older female students that led the exercises like aerobics instructors.  I suspect that this role is a high honor and they led with a precision that the most enthusiastic cheerleaders would admire.

I felt like the much of the difference between our culture and education system and theirs showed up during that 10-15 minutes.

I saw great discipline.  I saw very few children even mildly overweight and none obese.  I saw involved adults (there were over 35 watching the assembly).  I also saw a process that would prime the children for learning and positive energy during their morning classes.  Just getting through the exercises starts the day with a success, thus conditioning the brain to expect more success to come.

I admired these aspects of their system, but some concerned me.

It seems to me that the great shortcoming of the Chinese education system is the fact that they create great engineers but no Steve Jobs.  They focus on precise thinking, but not divergent or creative thought.  The assembly showed discipline, but it also encourages conformity over individuality; repetition over creativity.

Finding the right balance between the focus and discipline of their system and the more fluid aspects of ours is the great challenge.  [Note: when I talk about our system, I am thinking about ours at its best.  We clearly are failing our  lower socio-economic students, a problem that we need to address as a country, but that is not the focus of this observation.]

Our plunge into Shanghai/Chinese culture continued with a delightful tour that Susie found.  A couple of American ex-pats have created a company that provides authentic Shanghai eating experiences.  My mother (the Silver Fox) is giving us two such experiences while we are in Shanghai as Christmas presents.  Today was our noodle tour.  Kyle (our host and the co-founder of the company) took us to four different noodle houses.

If you, like me, mildly dislike people regaling you with tales of meals eaten, please accept my apologies.  I am hoping to give you a feel for the sun of the tour rather than the specifics of the food.  I will not discuss how the noodles play on our tongues or how the spices played in our mouths.

The first was a hole in the wall that was absolutely packed.  We were told to hover inside and grab the first seats available.  Virginia, Terrill and I sat on a bench for two across from a grandmother and her grandson. 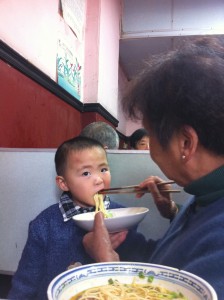 He was a fidgety guy who kept laying down, sitting up and standing up every minute or so.  While standing, I saw an interesting patch on his pants: 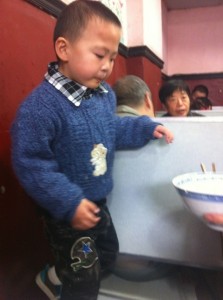 The menu on the wall has dozen of items, but Kyle soon explained that 90% of them are marked with the symbol for “sold out” and have been for every visit he has ever made.  In essence, they sell 2 types of noodles with 3-4 variations each.  You come in, grab your seat, eat quickly and move on.  I am reminded of the classic John Belushi skit on Saturday Night Live: “no coke, Pepsi.  No chicken, cheeseburger.  No hamburger, cheeseburger.”

We had sesame noodles that were very spicy and ridiculously tasty.

From there, we went to an alley, into a restaurant that was 6 feet wide and down some 3.5 foot wide steps to a private table with room for 5.  All 7 of us crammed around to have two types of noodles: one with carmelized shallots and another with sweet & spicy beef. 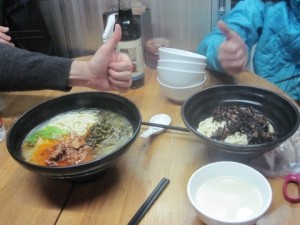 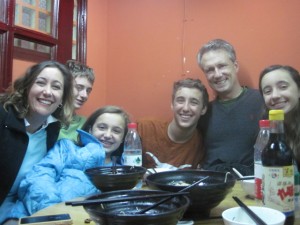 We then went to an upscale noodle bar with more westerners than natives.  He did this partly to show the contrast and also to provide access to a superior bathroom.  Here we are with more beef noodles: 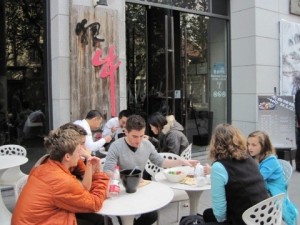 The final stop was a muslim noodle shop. I am not sure what that means except that there is no pork and the guys wear muslim hats.  The highpoint was watching the noodle-master make the noodles.  He stretches them, folds them, stretches them again and refolds them.  He repeats until the noodles are all the thickness of spaghetti. 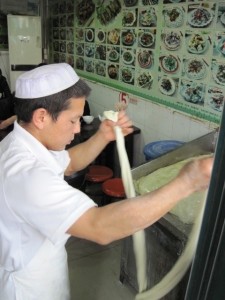 An older gentleman approached our table and started to chat with us.  He would look at me and talk.  Kyle would answer in Mandarin.  He would respond by looking at me again.  Clearly, he saw me as the eldest male and thus the one to be addressed.  I found this particular example of Confucianism intriguing, if not sexist.  Susie was not offended.  She just assumed I looked a lot older than she or Kyle. I do not like that answer.

After our meals, we went to an electronics market.  Our good Canon camera died about a week ago and we want a nice camera for our upcoming scenic outings.  We found a used Nikon for a great price and set out to buy a few more items and get a telephoto lens.  [Note: we also saw an “iPhone 5” for sale.  Perhaps I was wrong - maybe they do have their own Steve Jobs since the iPhone 5 does  not actually exist.]

Our children have different tolerance for the shopping experience.  Liam (as noted before) is the designated haggler.  Virginia is the designated consumer - she likes everything and encourages Susie to purchase.  Terrill is the thoughtful comparer.  Wiley struggles.  I can almost see his soul leaves his body.

Here is Terrill during the shopping outing. 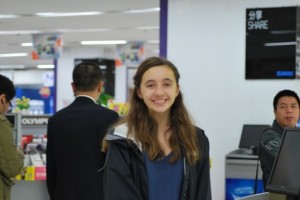 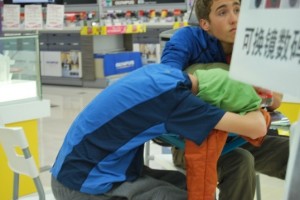 Tomorrow, Kyle is setting us up with an English-speaking chef who will take us to the “wet” market where we must haggle for our own ingredients.  Then he will show us how to cook four different meals.  On the menu - sea cucumber and garlic squid.  Marine life consumer Susie chose the menu.  We are excited!