Foreign or Familiar? (and a Nosebleed)

Last night, we watched the “Lion King” and the start of “Night at the Museum”.  At dinner, we heard “Endless Love”, “Fast Car”. “Girl from Ipanema” and the Eagles.  Rap music plays in the hostel café.  The walls feature Bob Marley, John Coltrane, Elvis, Al Pacino, Aubrey Hepburn and Marilyn Monroe.  Homes and stores flickered with TVs watching a talent show presided over by three judges, 2 men and one woman.  A native folk woman looks at a mobile phone and tucks it into her belt and behind a ceremonial sash.  Ads feature Lebron James and the NBA endorses beers, with the logo on the labels.

We are in a town devoid of English or streetlights.  Absolutely foreign mountains surround our village on all sides.  Homes are simple rooms measuring 15 by 25, with a stove in one corner and a simple seating area.  Foreign fruits festoon roadside booths, their skins are left out to dry for reasons we cannot fathom.  Chicken feet and duck heads arrive with our food.  Carts become trucks when engines are awkwardly attached to their fronts.

What outlook is correct?  I really do not know what to say.  I started to think this when Liam made an off-handed comment: “China does not seem that foreign to me.”

The rest of us argued with him – “what, are you crazy?  People are carrying a buckets using a pole balanced on their shoulders.  Pigs and chickens play in the street.  There is not a recognizable word anywhere.”

Even getting into this argument breaks one of my basic rules – who am I to tell Liam what he feels?  Our opinions are our own.  I wish my initial reaction had been less corrective and more inquisitive – how could he hold that opinion when it seems so wrong to me (and the rest of us)?

If you have read much of my ramblings, you will know that one of my basic beliefs is that “the world is what you sort for”.  By this, I mean that we have certain beliefs and theories about the world and themselves (sometimes I call them “maps”) that help us understand our experience.

Here is an easy example, think about two people.  The first believes the world is full of jerks who want to manipulate. The second thinks that people are fundamentally kind and interesting.  Both attend a party with 100 guests.  After the event, the former would tell you about all the jerks he met while the latter will insist the room was full of fun people.  Both were in the same room with the same partygoers, but they had fundamentally different experiences because their ‘maps’ were different.

They had different “sort mechanisms”.  The man sorts for jerks, the woman for pleasant people.  They simply do not see the contradicting evidence.

During the video, a person wearing a gorilla suit walks onscreen, stops in the middle of the frame, beats his chest for 3 seconds and then walks offscreen.

At the end of the video, over 65% of viewers do not see the gorilla.  When told to look for it, they will clearly see it, but they miss it the first time.  They will often insist that it simply was not there the first time.  Of course, the gorilla was indeed there, but since their mind was “sorting” for something different (white shirted basketball passes).

I came to China with an absolute expectation that it would be fundamentally foreign.  When I was here in 1986, it was deeply different.  I remember the spartan funishings, the open sewage in a small village, the feeling of oppression with multiple passport checks.

Liam is a bit of a contrarian by nature.  I am not sure exactly why he decided to adopt the hypothesis that “China is not that foreign”, but he did.  With that sort mechanism, he is simply seeing a different China than I am.

When we float the river, I see the mountains that look the most unusual while he notices the ones that evoke memories of New Zealand.

Walking the streets of Guilin, I focus on the pagodas, the eerie pollution-related glow of lights and the odd musical instruments wafting through the air.  He points out Nike stores, western-style advertisements and the familiar hip-hop tunes blaring from clothes store.

Here are a few fun pictures with both the familiar and the foreign.  Which one do you see first? 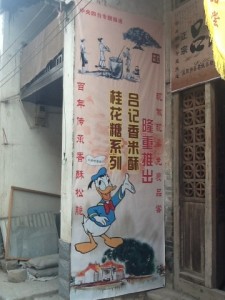 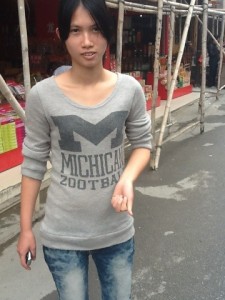 All I see is the “Zootball”, but I could see how you might see acid washed jeans, a cell phone and “Michigan”. 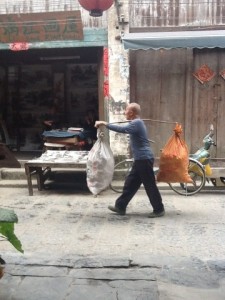 When Susie took the shot, all I saw was the carrying technique.  I missed the fact that he is recycling. 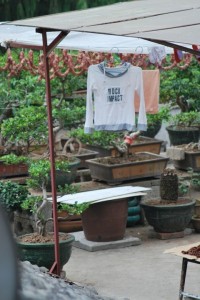 Outside our window, we saw this contrast.  The owner of this home is hanging her/his own personal sausage.  To the side, red peppers are drying.  Small fruit trees are on the balcony.  Yet this is her shirt.

We took this as an opportunity to talk about our own sort mechanisms/filters.  I suggested that we should strive to understand the sort mechanisms of others.  We also discussed the importance of understanding your own filters and being able to update when they no longer serve you.

During the day, we went on a long hike and had some excitement.  Without blowing the ending, I will assure you that Wiley did not exsanguinate.

I guess that requires more explanation.  Here it is.

We basically walked along the Li River – the same one we floated down yesterday.  You might think that this would be redundant, but it was anything but.  We crossed on a ferry with a camel at the loading point?!?  [Note: I do not have any idea either.  He did not seem to be selling rides or soliciting photos.  He was just there.  With a camel.] 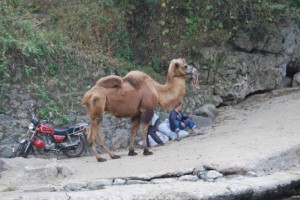 We crossed with a couple carrying a home entertainment system.  They walked with us for over a mile before we got distracted and watched them disappear in the distance.  In think that the average American would have smaller TVs if we had to carry them 2-3 miles before enjoying them. 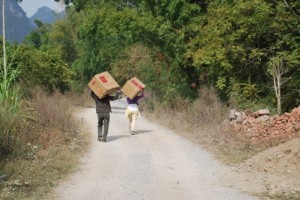 We saw small villages and people living their lives.  Some were really friendly – others less excited to see us. 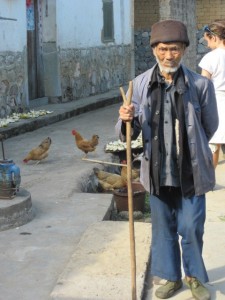 But the real excitement happened after almost 4 hours.  It was hot today – over 80 degrees.  Some of us were dressed for the heat, but not Wiley.  He was wearing grey sweatpants.  Hot, grey sweatpants.

They slowed him a bit all day – here he is trailing the crowd. 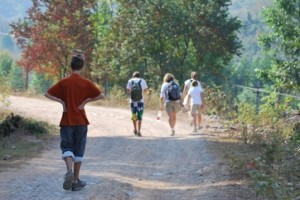 As we were walking, Susie called to me to stop and check on Wiley.  As I looked back, I saw the fountain of blood coming from Wiley’s nose. He had a serious nosebleed.  At the time, a sweet elderly woman was walking with us.  I have no idea if she wanted to sell us anything, but she had made no effort to do so for over 30 minutes.  Seeing the nosebleed, she offered some Chinese medical advice.  She poured water on the back of his neck and then pounded on it (it is worth noting that Susie had already arrested the bleeding by having him lean back and hold his nose). 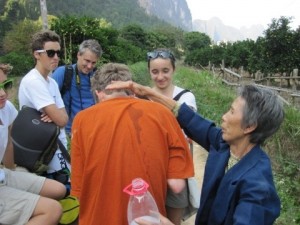 Wiley left better, and we started to walk.  As we arrived in her village, she kept trying to get Wiley to go to someone’s home to get something (water? Food? Medicine?).  We insisted that Wiley was OK, but he then said he was feeling light headed. 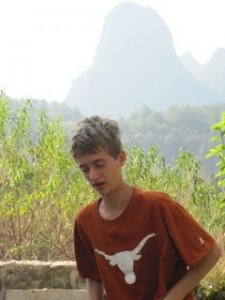 As we walked into the shade of a home, he fainted. I am having fun with this now, but I can assure you that it was not fun at the time.  He was on the floor, pale and reviving with the help of a wet cloth provided by our sweet woman. 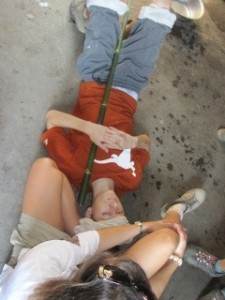 We recovered and grabbed a boat back to our city.  On the way, we did get some great photos, so let me share them now.

Here is Susie with the kids on the walk. 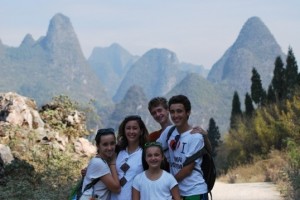 Man, it seems those boys are just rocketing up.  Here is another shot with just them and Susie. 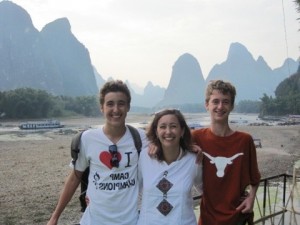 It was then that Terrill pointed out that the boys are standing on their tip-toes in these shots.  In this one, we reverse the roles. 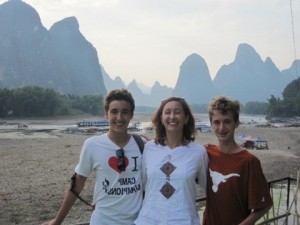 Here is one with me and the girls. 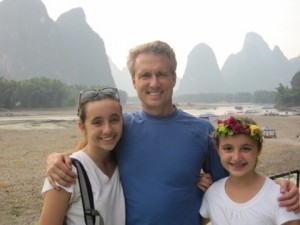 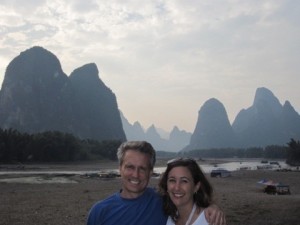 Finally, here is a final nice shot as the day wound to a halt. 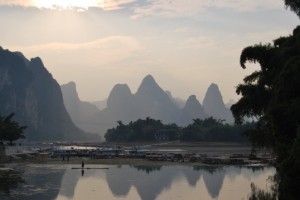 Tomorrow, we will head farther south to new sights!