I have long adhered to the view that the best way to beat jet lag is to power through it.  Get up and attack the day as if you are a native.

Our group embraced this challenge as much as they could.

Before I tell you about the day, let me tell you how it ended.  After a long day of discovery and oddity shopping, we decided to go to the Beijing DanDong Restaurant, an institution known for its superior Beijing/Peking Duck.

I was excited.  Susie was excited.  The kids were, well, not really up to the challenge.  Here is each of them as we waited for the waiter. 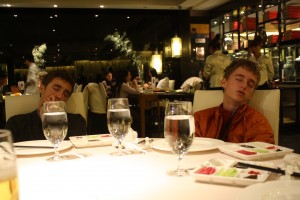 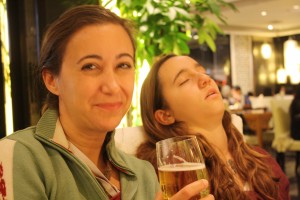 We spent the first day as shoppers.  Allow me to start by saying that I personally do not like shopping.  By “do not like”, I mean “I believe that there is a circle of hell dedicated to shopping that animal abusers go to”.  Nevertheless, there are certain opportunities that one must embrace.  Two such opportunities in China involve shopping.  First, there is the dirt market. This is essentially a massive flea market/antique bizarre. If you want anything uniquely Chinese, this is the place to go.  These includes calligraphy, carvings, jade jewelry, silk clothing, antique coins, paintings, and more than I can really name.  This market is open only on the weekends and we just made it.  Roughly 99% of the shoppers were natives.  It felt very authentic.  More on that in a moment.

The second type of shopping is bargain shopping where you purchase Western goods at deep discounts.  To clarify, “Western goods” is not exactly correct.  Perhaps I should say “Westernish goods”.  These are watches, Polo shirts, Ralph Lauren sweaters, Columbia jackets and literally thousands of other items. OK, they are not precise replicas, but they are close. Liam and I got cashmere sweaters that are cashmere-like.  Soft and attractive, but probably not 100% cashmere (despite the insistence of the vendor and the “100% cashmere” label).  They were still great values even if they were angora wool, so we got them.  We got cheap watches and sunglasses.  We ignored any and all claims of authenticity and evaluated our purchases assuming that they were of dubious origin.  Even with this, it is hard to beat an $8 watch.

I came to this day ill-prepared.  I have committed to writing honestly in this blog, so I must open up to you and admit that I am genetically incapable of haggling.  My father hated to haggle - like must people hate dental work and colonoscopies.  It was simply not in his DNA.  This recessive gene passed on to his son.  I go through the motions.  I counter-bid and shake my head disapprovingly at the offers of the vendors. I act like I am walking away. I do what other people seem to be doing.  The vendors are not buying it.  Like piranhas smelling a bleeding bull, they engage me.  At least, until Liam approaches.  He lives to haggle.  He sees it as a high art.  He offered to haggle for each of us.  Happily, we did not shop for women’s underwear as that would have been highly awkward.  On a couple of occasions, he insisted that I do it on my own.  Like a parent allowing a young child “help cook”, he watched lovingly as I fumbled through my efforts.

“You have no ‘walk-away move’.  They are not buying it! How do you expect to get a real drop without the walkaway?”

OK, so I guess I should share some authenticity stories.

First, we rode the Metro everywhere.  We had been told to hire drivers for the day, but I must say that the Beijing subway is marvelous.  It is clean, fast and new.  All announcements are made in Chinese and English.  The directions are all clear.  In Europe, subway lines would often only designate directions using the name of the terminus of the line and not the direction (eg, North or East).  Here, they do both.  Also, tickets are less than $0.40.  In London, they were often $4.00.

Second, we are eating like natives.  We are trying street food and small kiosks.  Most places have menus with pictures, so we order using the point method.  This does not entirely protect us - it is hard to tell from a picture if you are getting meat or “sweetbreads”, but we are pretty omnivorous and adapt well.  Also, if we do not exactly know what we are eating, we are less likely to get grossed out. 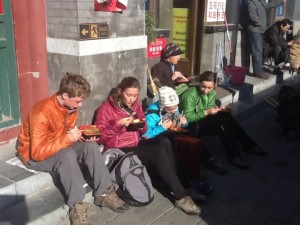 Our street food experience at the dirt market (see pic above), however, was a notable exception.  I say this because it is hard to disguise a chicken foot.  Terrill and Wiley both got one in their lunch.  Here is Terrill displaying her excitement in the discovery.

I had already wolfed my meal and part of Virginia’s once the feet appeared, so I passed on trying them.  Neither child felt like trying theirs.  Instead, they put both in one bowl and re-created the portion of the Sistene Chapel where God creates Adam and reaches out to him.  I have spared you this photo in the name of good taste.

The final example of authenticity concerns the public restroom facilities.  I struggle with finding the right balance between honesty and civility here.  Let me see if I can navigate these straits with four simple pieces of evidence.  First, you know those “last cleaned” checklists on the doors of restrooms in gas stations and fast food restaurants?  There were none in these units.  If there had been, I suspect they would have been written in papayrus.  Second, there is not really standard Western toilets.  The design is simpler, as in “a hole in the floor” simpler.  Enough said on that.  Third, ventilation requires thoughtful design.  No such thought seemed to have happened here.

My final data point is captured through the magic of photography as Susie left. 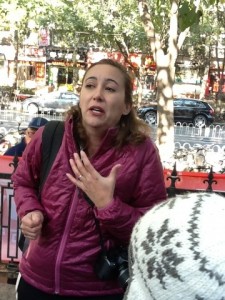 One last addition before we head out on our next adventure.  I want to share some of the amusing mis-tranlations we find here.  Let me start by saying that I deeply appreciate the commitment of other countries to communicate in English.  I have pathetic foreign language skills.  I also know that it is unfair at some level to point out bad translations.  It can seem like we think we are superior.  This is not the case.  I share these merely for the fun of them.

In our bathroom/shower, they have a trashcan that asks that you put all paper in them rather than the toilet (our rooms have Western toilets!).  The trashcan reads as follows:

“Let’s feel the clean cosmos.  Means chaste and joyful, and let’s feel free urgently the fresh family’s atmosphere.”  Wow.  I have no real idea what this means, but I long for a fresh family atmosphere.  I long urgently for it.

The shopping center was huge, with a sign that states proudly that it is “25,000 square meters totally”.  I assume that a teenage girl totally wrote this.

The final example is this message engraved in marble at the dirt market.

Until tomorrow, here is wishing you fresh family atmosphere with an evenest price!